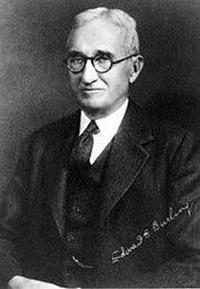 Duane W. Krohnke ’61 has done exhaustive research about Edward B. Burling 1890 and another prominent Grinnellian, Joseph Welch 1914, and has made the results available on his blog: dwkcommentaries.com. A prominent Washington, D.C. attorney, Burling was the principal benefactor of the 1950s construction of the College’s Burling Library, which was named in honor of his mother Lucy Burnham Burling. During his career, Burling had extensive and close contacts with U.S. and foreign officials, including Secretary of State Dean Acheson and U.S. Circuit Judge Learned Hand.  As counsel for the U.S. Army, Welch is known for asking Sen. Joseph McCarthy: “At long last, have you left no sense of decency?”