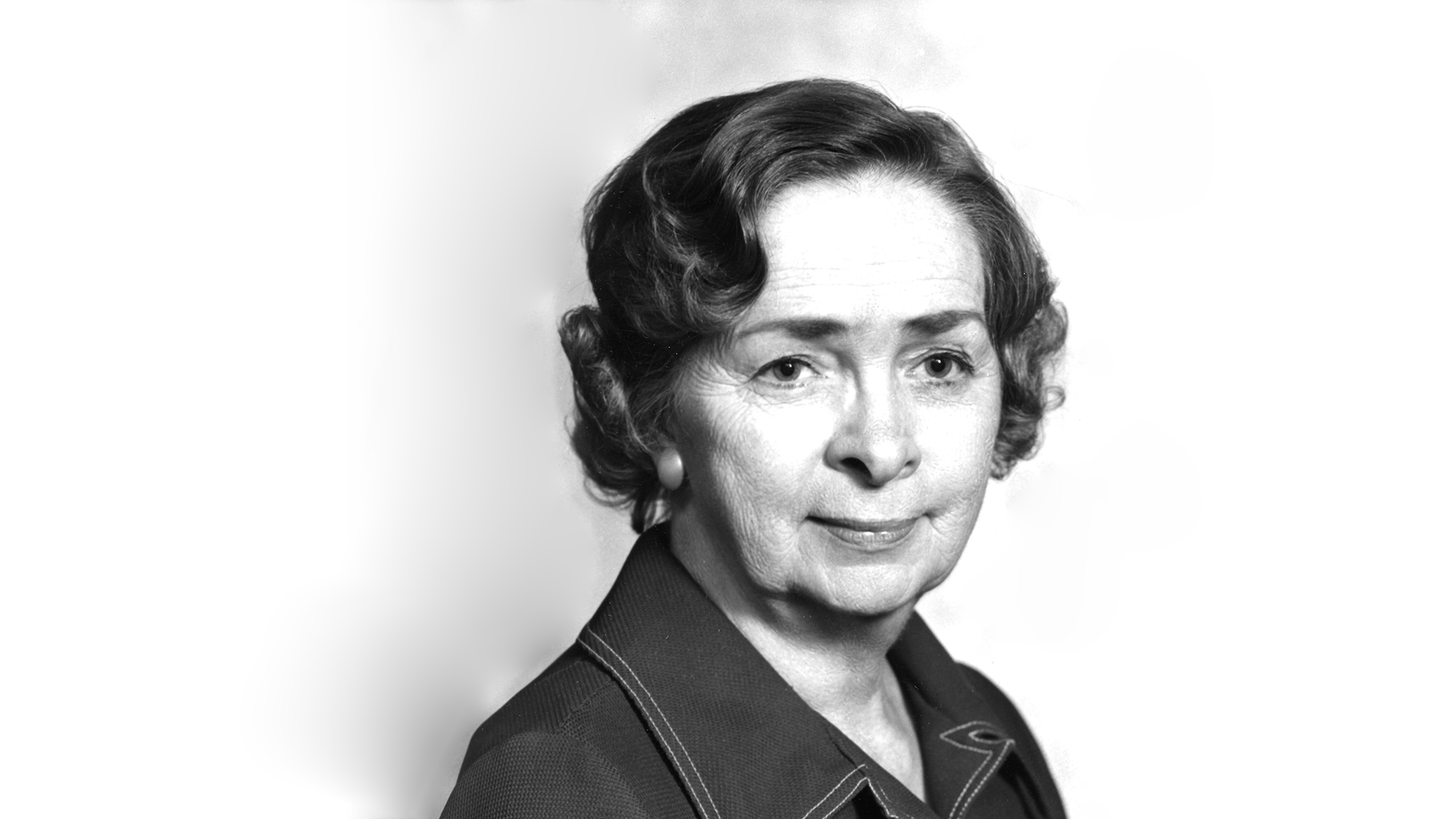 The “force” behind The Grinnell Magazine
Michele Regenold ’89

Developing a magazine is not accomplished overnight. Or even in a year — especially in the midst of many other projects, like news releases and student recruiting brochures and an existing alumni newspaper. Nine years before The Grinnell Magazine debuted in the winter of 1967–68, Ruth VanBuren Prescott proposed that the College publish a magazine.

Prescott, an Iowa native and Cornell College alumna, came to Grinnell in 1944 after several years as a newspaper reporter and editor in Bangor, Maine. At Grinnell she served as editor of the Alumni Scarlet & Black (AS&B), a four-to-eight-page newspaper published for alumni six times a year. It was one of her many responsibilities in the College’s information services office.

In 1958 Prescott proposed to Grinnell’s Alumni Association Board of Directors (precursor to today’s Alumni Council) that the College stop publishing its newspaper and start publishing a magazine. It’s not clear if Prescott made the proposal on her own initiative or if she was asked to by someone else, such as then-President Howard Bowen.

During her presentation to the alumni board, Prescott showed several magazines published by colleges similar in size to Grinnell to demonstrate the “attractiveness of the cover design, the quality of content and readability, and the eye appeal of this format.” About half the alumni board members liked the idea. The other half thought the newspaper was fine. “No formal action was taken,” according to the board minutes.

A few years later, in 1962, Prescott presented a paper, “For Alumni: Magazine or Newspaper — Which or Both?”, at a conference of college and university communications professionals. “A newspaper has seemed right to Grinnell since 1940, when it was started as a replacement for a rather sorry magazine-type periodical,” she told the audience. She thought it was “better to have a good newspaper than a poor magazine.”

Magazines that “are the badly conceived, badly edited, badly printed results of the we-must-have-a-magazine-because-it’s-the-thing-to-do trend” especially irked her. She disdained “intellectual content” that was inappropriate for the institution and the alumni audience at the expense of material better suited to the “primary editorial purpose.” And fancy typography and design? “The editor had better be sure that his design serves a functional purpose for his readers, that it is not merely distractive instead of attractive,” she said.

“One of these days,” Prescott mused, “I suspect we will start a magazine — and drop the newspaper. But when we do, I hope we will be sure of these basics: a frequency of at least six issues a year; enough pages in each issue to make the book worth picking up; smart, simple design; an editor of extraordinary competence and few other responsibilities; and, of course, enough money to do a proper job. Above all, it should be Grinnell’s, not an imitation of anybody or anything, and certainly not an attempt to compete with the Atlantic Monthly or the Saturday Evening Post or Life. We would hope to continue doing what we try to do with our newspaper, to give our alumni what we uniquely can give — information, interpretation, communication, even rapport — the true reflection of their college.”

By all accounts Prescott was a strong-willed, feisty woman (a retired Grinnell administrator who knew her well describes her as a “hard-ass”). She wanted Grinnell College to publish the best periodical it could afford. In 1966, she wrote a memo to then-President Glenn Leggett listing three things that a “first-class” magazine requires:

About editorial expertise, Prescott continued, “The present AS&B editor and her colleagues do not feel qualified to assume full magazine responsibility without a sizable amount of additional technical training, nor is the present staff large enough to absorb the considerable extra work a magazine would entail.”

Why did an editor with 25-plus years of experience — not only in newspapers but other college publications as well — not feel qualified to edit a magazine? And what did she think when someone without professional editorial experience got the job? One can only surmise. Prescott was a whiskey drinker, so perhaps she knocked back a few after work and got on with things.

Although she didn’t have the head job on the new magazine, Prescott’s role as managing editor was instrumental. She used her expertise in copyediting and print production in an era when pages were literally pasted up.

The magazine’s inaugural editor, Dean of Men S. Eugene Thompson ’58 (deceased), bade adieu to Grinnell in 1968 after editing three issues. He left to take a similar position with Whitman College in Washington state. He wrote to Prescott, “I’m having a delightful time, though doing everything single-handedly, including design (liberally and unashamedly borrowing Quirk’s ideas), and learning fast.” He shared a copy of his new Whitman magazine. It looked remarkably like The Grinnell Magazine, from the typography to the spot color to the paper stock.

Prescott was livid. Grinnell had paid John Quirk — Grinnell’s freelance design consultant — several thousand dollars for his work. She wrote to Thompson, “I fear you have just made history in the field of alumni publishing. But not in a way of which you will have reason to be proud. I — as well as numerous others here and our designer and our printer away from here — am completely appalled at your unethical and unprofessional theft of the total design and format of The Grinnell Magazine for your first issue. … I can only suppose that you must have been ignorant of the nicety that this sort of thing is just not done, but it is still inexcusable on any basis.”

One can imagine the profound embarrassment Thompson must have felt on receiving Prescott’s letter. He’d accepted the part-time role of magazine editor on top of his responsibilities as dean of men at Grinnell, likely a challenging job by itself in the late 1960s. Before that he’d been a high school teacher. The editing bug must have bitten Thompson, however, because he spent the rest of his career working in college communications.

Prescott worked with three other editors before retiring from her job as associate director of college relations. She helped hire her own replacement, Gayle Burdick, who recalls the job interview.

“Ruth asked if I was married or single,” Burdick says. “I told her, ‘You know, Ruth, it’s none of your damn business. If you really need that information for me to work here, I don’t want to work here.’  That’s when Ruth knew I had a spine and could handle the job.” Burdick laughs. “She told me how to do the rest of the interviews.”

They worked together for a short period before Prescott’s retirement in 1978. “She basically made it possible [for me] to do the job,” Burdick says. “She was a force.”

Our Gift to You

Reveal a map by Kevin Cannon ’02, in celebration of 50 great years.