From Egypt to Iowa

I recently became a U.S. citizen; and the day I took my oath, I voted in my first presidential election.

I am an American by choice. More than 17 years ago, I arrived in the Midwest, a young graduate student looking forward to studying in an inclusive vibrant classroom where men and women equally participated in class discussion. For me, the Midwest was fascinating. Unlike the weather, people were nice and warm. I adjusted really well and became part of the community. I excelled academically, took part in interfaith discussion groups, volunteered in organizations working with the disabled people and was welcomed in the homes of my host families during the holidays. I was embraced and accepted, and I reciprocated and gave back. 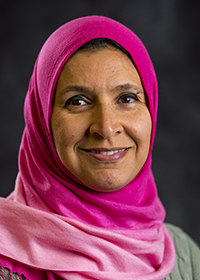 I chose to be an American. After graduating from the University of Iowa, I landed a job at Grinnell College. I earned it. I have worked hard, participated in educating hundreds of young men and women, obeyed the law, contributed to the economy, and paid my fair share of taxes. I was very happy to stay in the state I now call home. I chose to be an Iowan.

On Nov. 9, Donald Trump became president-elect despite losing the popular vote. My vote was not as valuable as some others. The electoral system in the United States does not guarantee that all votes are equal. Thus, although the majority of Americans did not vote for a candidate as divisive as Trump is, he is now president-elect.

Following his populist rhetoric, I had anticipated the election outcome. It was my reaction that I had not anticipated. Donald Trump said he will be a president for all Americans, and he should. However, his administration choices, especially that of chief strategist, Steve Bannon, who is a white nationalist, is indicative of anything but being a president for all Americans. This is expected of Trump. What is not expected, however, is the deafening silence Trump’s choices received from fellow Americans who voted for him. I am yet to know of a single person who identifies as a Trump supporter who publicly voiced concerns about Bannon’s prospective appointment.

I chose to be American and I chose to be Iowan, but as I see many of my fellow Iowans stand silent before Trump’s choices, I find myself wondering if the smiles I see everywhere belong to hearts that no longer want me here. This is exactly how alienation happens.

My oath ceremony experience was a heartwarming one. In a room filled with diverse faces of those who are soon-to-be fellow Americans, a video of American people and places appeared on a large screen. Among them were Martin Luther King Jr., whose “I have a dream” speech inspired generations, and the Lincoln Memorial, where he delivered it. “America the Beautiful” played in the background. I looked at the faces of my soon-to-be fellow Americans and those on the screen, including President Lincoln’s face carved into Mount Rushmore. The America we chose to be citizens of and pledged allegiance to looked both diverse and inclusive. This is what I will hang on to. This is what I will always see.