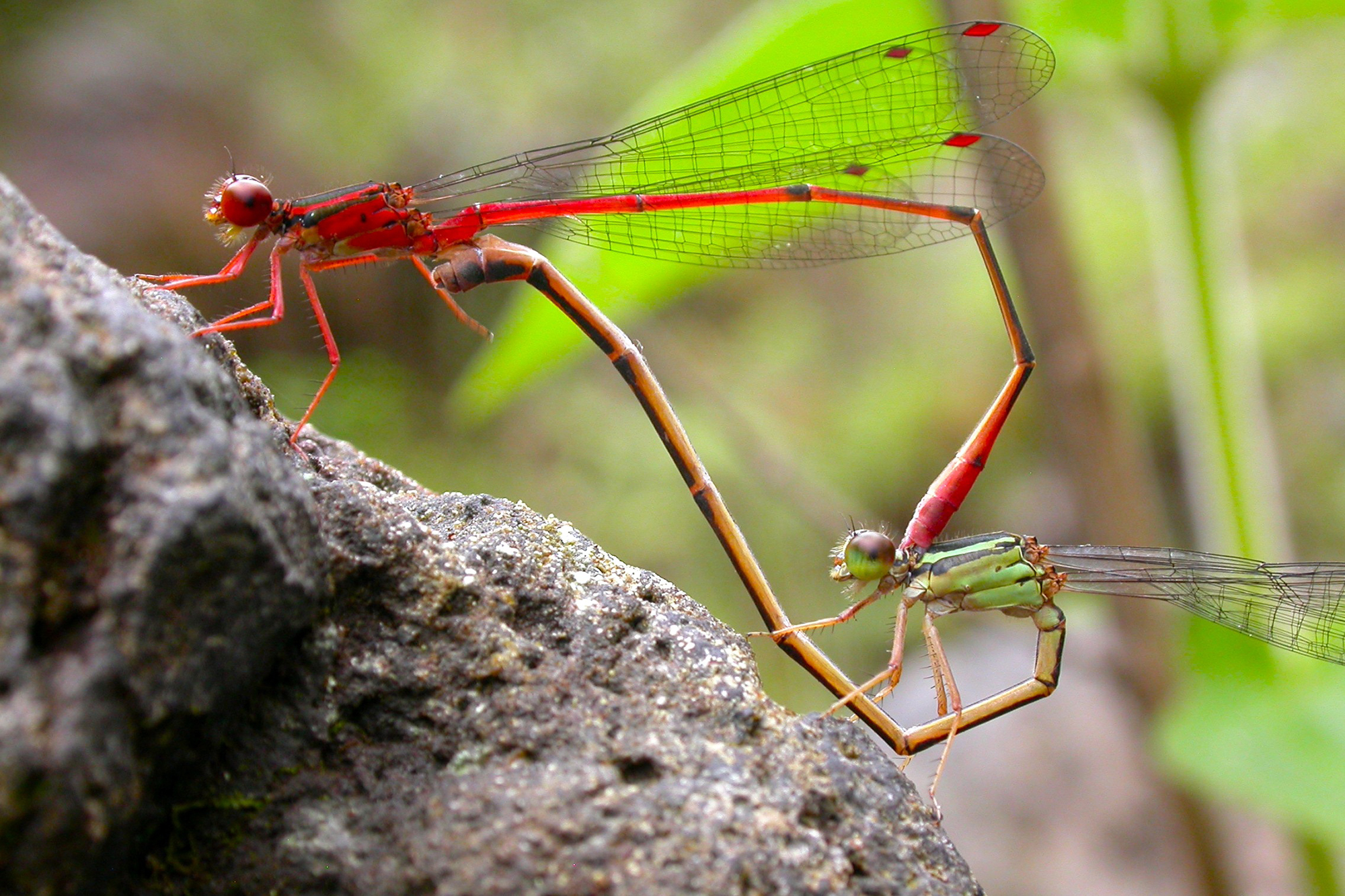 The Essence of Inquiry

Student research opportunities at Grinnell are abundant and diverse. In 2014–15, 40 percent of students completed a Mentored Advanced Project or MAP — a distinctive Grinnell program that provides exposure to research methods, collaboration with faculty, and deep career insights. It’s one reason why Grinnell ranks seventh among all private and public national institutions for graduating students who go on to earn Ph.D.s.

“There were huge research institutions represented in divisions like neuroscience, math, cell biology, microbiology,” Nartey says. “The judges that came to hear about my research were like, ‘This all took place at Grinnell?’ Yep, this happened at a small, rural liberal arts college in Iowa. They were really amazed.” 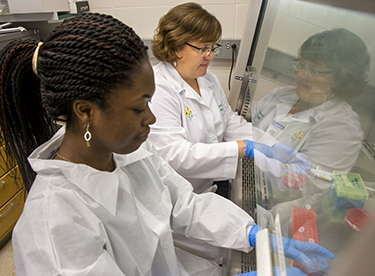 Nartey, a biological chemistry major, shared findings from her MAP that could have major implications for health care environments where harmful bacteria pose a threat.

“Hospital-acquired infections are a big concern,” Nartey says. “If a doctor touches a door handle and then examines a patient who has an incision still healing, that’s a way for bacteria to enter into the bloodstream and spread to different organs.

“Copper is an anti-microbial agent; it kills bacteria by disrupting the outer membrane and degrading the DNA,“ Nartey explains. “For this research we were hoping that with copper on surfaces like door handles, light switches, IV poles, and keyboards, we could minimize bacterial growth and hospital-acquired infections.”

Nartey collected samples for analysis at Grinnell Regional Medical Center. The hospital is partnering in the study by implementing copper alloy surfaces on high-touch areas in patient rooms and examination areas. 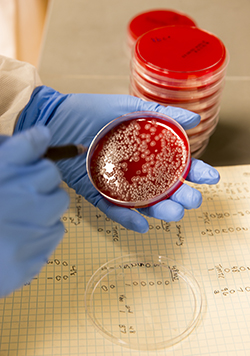 Comparing samples to those from her stainless steel control, Nartey documented a significant decrease in bacterial growth for the copper alloys. She is continuing her MAP this semester to test further for resistant bacteria and to sequence for genus and species.

“Being pre-med, it’s wonderful being part of this translational research where I see the direct impact of the results right away,” Nartey says.

Nartey’s MAP, mentored by Shannon Hinsa-Leasure, associate professor of biology, exemplifies faculty-directed research that leverages partnerships and funding for capstone-type opportunities. Nartey says having published papers as an undergraduate will help facilitate her access into a fellowship position after graduation and eventual application into an M.D./Ph.D. program.

“Queenster has become an invaluable member of our hospital research team,” Hinsa-Leasure says. “Her attention to detail and mastery of laboratory techniques have allowed us to expand on our initial studies and gather enough data to tell a complete story. I appreciate her strong interpersonal skills that have allowed her to work effortlessly with all types of care providers at the hospital and her vision for where to move the project next.”

Tying it all together

Josie Bircher ’16, a biochemistry and math double major, is using her math skills to help advance chemistry professor Mark Levandoski‘s studies on receptors in the brain linked to nicotine addiction. 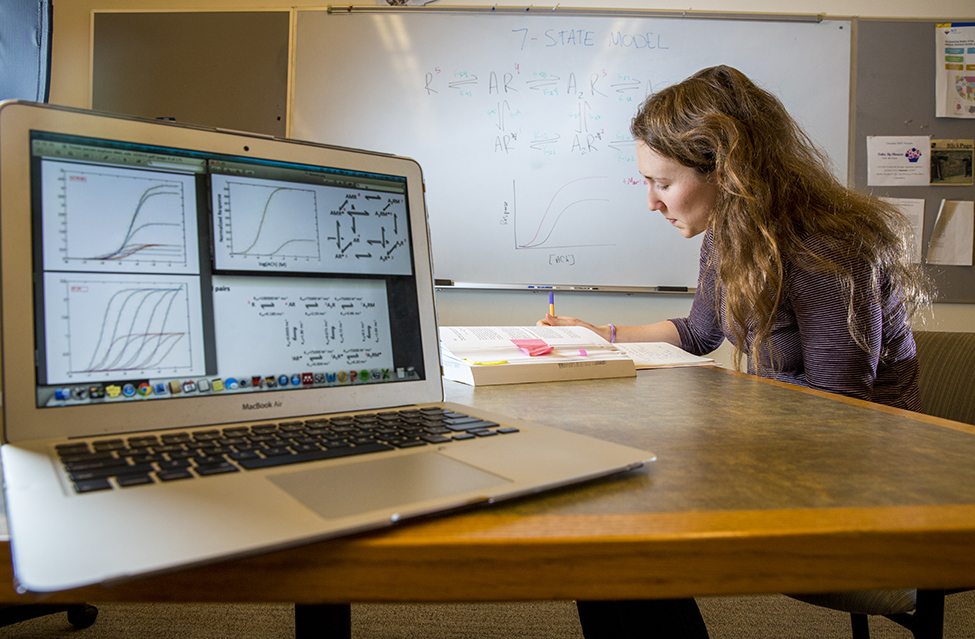 Bircher’s work expands on what students did in previous years, and she values the continuity that’s built into system. “I relied heavily on what people had done in the past and the final papers they wrote, so those really help in continuing the process.” Bircher says. “It’s a huge benefit of the structure of the MAP.”

Each MAP proposal is “essentially proof that you’ve put a lot of work into it and that the project is well thought out,” Bircher says. “It’s also a justification of the research question, how it’s relevant to previous work, what you plan to contribute to the field, and how it relates to your previous studies, because the MAP is supposed to be a culmination of all of your prior coursework in an advanced level.”

Bircher attributes the success of her current MAP to what she has learned in her math classes and sees the research process as intrinsically valuable regardless of what a student might choose as a career direction.

“As I’m planning on being a researcher, it’s been perfectly aligned with what I want to do in the future, but I think that your final goal doesn’t have to be research to do a MAP and to be involved in the research process,” Bircher says. “I think it really helps tie together everything you do in classes, and experiencing this type of research firsthand instead of just reading about it is largely beneficial.”

Levandoski says the value of research to an undergraduate education cannot be overstated, even beyond the fact that students involved in research often become full collaborators, conference presenters, and publication co-authors in the process.

“By its integrative nature, a research experience affords students some opportunities for growth that are rarely possible in regular coursework,” Levandoski says. “Students gain independence and confidence as they work to figure things out for themselves, drawing on their previous experiences.

“Some of my most rewarding interactions with research students have come from observing their ‘Eureka!’ moments — not about the science itself, but about the discovery of their passion for it. You can’t put that in a textbook or a syllabus.”

Collaborating in the field

Two summers ago, Rebecca Rasmussen ’16 and Edward Hsieh ’16 helped find what turned out to be the largest supercolony of ants ever recorded in North America. By “large,” we mean from Iowa to the Appalachian Mountains.

The success of that project earned them both an invitation from Jackie Brown, professor of biology, to do a MAP in summer 2015 on Big Island, Hawaii.

Both students accepted, and by mid-May they were planning preliminary field studies to help Brown and Idelle Cooper ’01, assistant professor of biology at James Madison University in Virginia, find out why some female damselflies are red and others are green.

“I was looking at a behavioral biology aspect because we wanted to see if the females were evolving this color dimorphism because of sexual selection,” Rasmussen says. For two months, she and other researchers stalked damselflies at various sites near Naalehu, the southernmost town in the United States.

“Our main hypothesis was ecological selection, so I was testing the alternative,” Rasmussen says. Her findings indicated that sexual selection was minimal. “What we saw goes along with what Professor Brown and Professor Cooper have been positing, which is promising for their research,” she says.

Hsieh tested for chemical properties related to the color morphs. “In the ant project I looked at their particular hydrocarbons, and in this one I looked at antioxidant chemicals to see what potentially helped protect damselflies against UV radiation depending on the elevation,” Hsieh says.

Hsieh’s early findings contradicted expectations that red pigment signals protection from UV stress. He found that the redder the damselfly, the lower its antioxidant capability. “We have a couple of theories as to why that might be so,” Hsieh says. “It’s still pretty open-ended and we’re continuing to work on it.”

Brown, who along with Cooper received National Science Foundation funding for the damselfly project, says, “Working with Edward and Rebecca on two different projects has highlighted for me both their talents and the value of our research-based curriculum in preparing students for meaningful participation in research.

“Each has built on their particular experience with the ant project, but in a completely new setting,” Brown says. “We’ll be working hard together during their senior year to submit these results for publication.”

Rasmussen says the collaborative research processes have made her feel “more prepared for going to graduate school in biology, if that’s the route I decide to take. Going through the planning stage, executing it, and then summarizing it is, I think, applicable to any career field.”

As an undergraduate, Rasmussen says, it is satisfying to do work that adds knowledge to a field. “It is pretty exciting to find things that could seriously contribute or that turn out to be an unusual finding that is worth reporting,” she says.

“I was originally interested in doing biological field research,” Hsieh says of his MAP experience, “and these opportunities gave me a lot of experience in what I would expect to do if I were to continue in that vein.”

Even fieldwork has its perks, and because damselfly research is highly weather dependent, the research team used rainy days to seek out diversions that included Hawaii’s mix of Asian cuisine, volcanoes, and black sand beaches.

“One morning it was raining, so we went to a beautiful beach for snorkeling,” Hsieh says. “We swam with sea turtles, and then farther out we found a giant pod of 30-plus dolphins.

“We were swimming with dolphins,” Hsieh says. “It was one of the coolest experiences of my life. And it was on my 21st birthday. It was awesome.”

Olivia Queathem ’18 is one of six students participating this spring in a group MAP in religious studies. Queathem and her co-researchers will be conducting student focus groups, the results from which will help inform a grant-funded study examining campus religious climate. In particular, the MAP will look at how classrooms in an intentionally secular environment such as Grinnell are affected by students’ closely held religious beliefs and experiences.

“There can be some pretty strong emotional attachments to what’s being talked about, and it’s a really difficult balance to find a classroom climate that feels open so that people can say what they’re feeling and ask honest questions,” Queathem says. “The professors are always looking for better ways to make sure that students feel safe in the classroom expressing their views through respectful dialogue.”

“This MAP is really interesting because students begin from a position of authority,” Dobe says. “In a more typical MAP, the professor is seen to be the one who’s got the authority, because you’ve mastered a field, or you know the methods best and you’re going to correct lab mistakes, or you’re going to see where they missed interpretive questions they should be asking.

“Here, the students’ own experience validates their contribution to the research, and I think that part of this whole grant emerged out of conversations like that — with students, with people who work with students in student life so that we recognize the limits of our own knowledge.”

Elfenbein says that student-led focus groups are an important early phase of the overall study, because “other students might be willing to say things that they wouldn’t if Tim and I were leading the focus groups. So, in terms of curricular and pedagogical development in the department, we couldn’t do this work without the students.

“We’re also thinking about how to work with the information we garner in terms of future programming,” Elfenbein says, “in which students with religious commitments might actually participate in presenting their experiences at public forums to generate conversation about forms of diversity that usually aren’t part of the discussion, like religion on campus.”

What is a Mentored Advanced Project?

For a detailed look at MAPs, see
www.grinnell.edu/academics/arc/academic-affairs/map