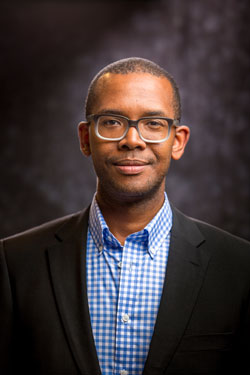 Faculty member Vance Byrd will give a book talk about German panoramas and literature on Thursday, April 26. This event, which is free and open to the public, will begin at 4:15 p.m. in the Burling Library Lounge, 1111 Sixth Ave., Grinnell.

Byrd, associate professor of German, chair of the Department of German, and Frank and Roberta Furbush scholar in German, will read from and discuss his new book, A Pedagogy of Observation: Nineteenth-Century Panoramas, German Literature, and Reading Culture. The book is part of the New Studies in the Age of Goethe Series published by Bucknell University Press.

He will explore the history of the panorama as a site of entertainment and observation and argue that many Germans first encountered the panorama through literature in the early 19th century. The German intelligentsia, he contends, used the written panorama as a way to understand and critique industrial transformation, urban development, scientific exploration, and new possibilities for social interaction.

Byrd has published on topics related to media studies, museum studies, environmental humanities, cultures of commemoration, and graphic novels. He has started researching a second book, titled Forester Fictions: Scientific Forest Management, Anti-Semitism, and the German Imaginary. This project addresses how the institutionalization of forest management and the emergence of the professional forester since the late 18th century have been linked to the rise of the modern German state.

In addition to larger research projects on visual culture, popular entertainments, and the environmental humanities, Byrd researches and teaches history of the book and periodicals. He recently co-edited a journal issue on interpreting German literary texts in their original 19th century periodical publication context and is preparing an edited volume on 19th century literature and editorial culture.

Grinnell College Libraries and the Department of German are sponsoring Byrd’s book talk. Refreshments will be served.

The Burling Library Lounge is equipped with an induction hearing loop system, which enables individuals with hearing aids set to T-Coil to hear the program.