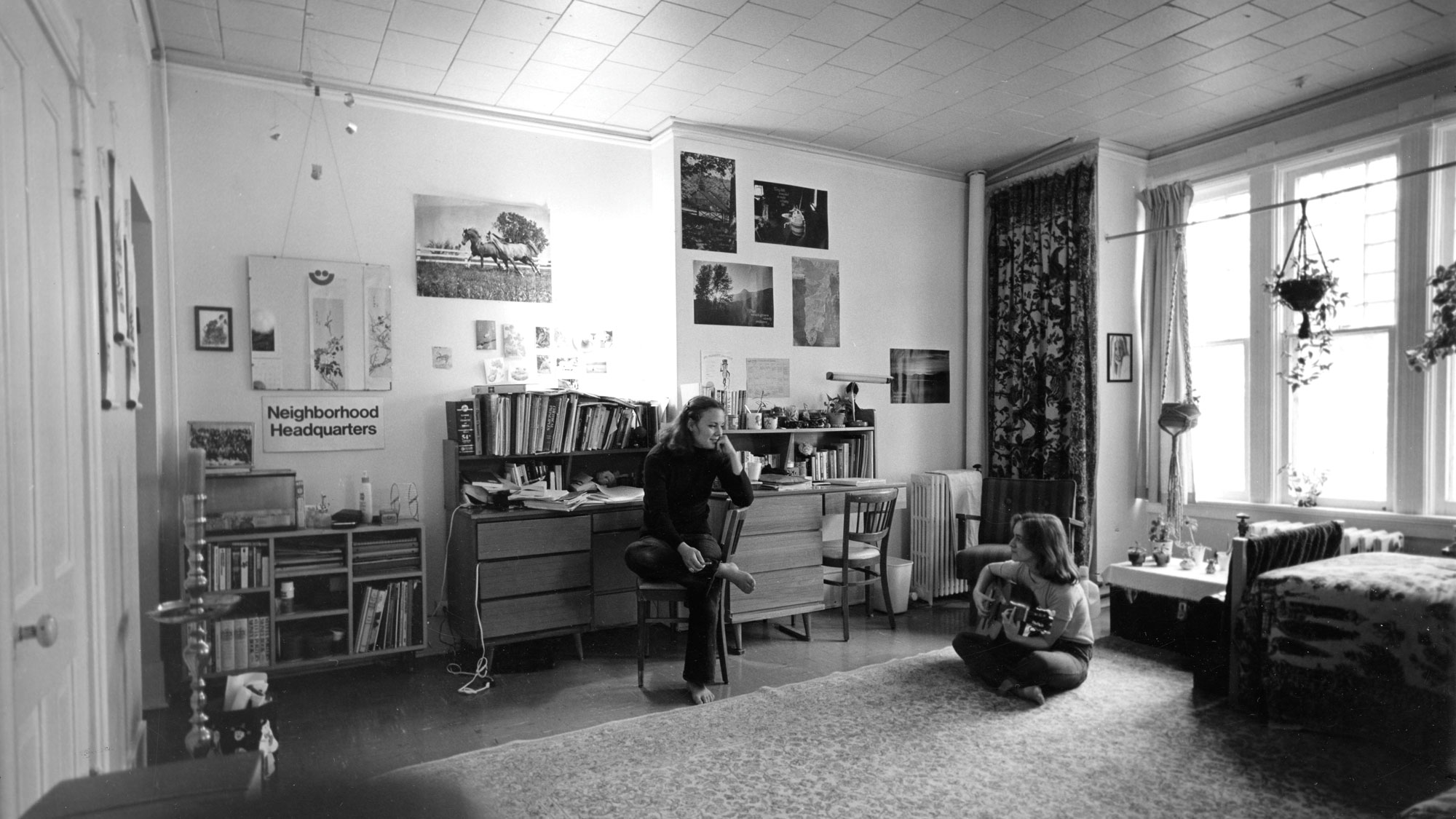 If These Walls Could Talk

A lot of learning takes place in the residential spaces of the College, not to mention some hijinks, the start of lifelong connections, and a few rom-com romance moments. Readers share what the hall walls never tell.
our readers

In the Spring 2021 issue, we asked readers to share their experiences in residence halls that helped them see the world in a new way, and we received dozens of responses. Here are some of our favorites.

Freshman year someone left me a love note on the whiteboard outside my room. I never found out who wrote it. It was really beautiful.
— Erin Barlow Haggerty ’95

Back in the ’60s, before the cellphone era, the only phones in the dorms were in the hallway on each floor. Whoever answered the phone would find the person that the caller wanted to talk to. If they were not available, you would write down the message on the message board. Abbreviations were used. The two most common messages: BCWCB (Boy Called, Will Call Back) and BCNM (Boy Called, No Message).
— Judith Hand Demarest ’64

I lost my virginity in a dorm room (Loose Second North) and I got engaged in a dorm room (Gates Second). (Same person. We got married in Herrick.) Met my first lesbian in the dorms. (She was one of my groomspeople when we got married.)
— Kerry Bart ’94

Week one of first year, Main Third. I was studying on the floor in the hallway when about five cross country runners appeared, completely naked, save for their running shoes. Turns out, they were stopping by to say hi to a fellow third-year student. I had heard about people streaking, but just walking about naked? Blew my rural, southern mind. I remember thinking it was so awesome people were so comfortable just being their authentic self, and it was accepted, no judgment.
— Jackie Graves ’10

I remember getting ready to take my MCAT, and people were having a party right outside my window on the loggia. I was getting annoyed and anxious, but I went out and told them I was about to take a big test the next day and could they move to a different spot. They said yes and started grabbing their things to move. I went back to bed. Then I found in the morning they wrote me good luck sticky notes. It was such a good example of how these little confrontation moments with your neighbor don’t have to be scary and can lead to more connection and support — if only you have the courage and courtesy to ask.
— Sarah Stayer Mills ’06

I loved that we could request international roommates. My roommate was from Pakistan, which was great, as it enabled me to make friends with a wonderful and diverse group of students. I didn’t love having to eat at the cafeteria, but they were wonderfully accommodating when during the month of fasting (I was a practicing Baha’i at the time), they allowed us to come and eat breakfast before dawn. That year the Baha’i fast also coincided with Ramadan, so many of my Pakistani friends joined me, and it was a wonderful thing to share.
— Lara Chho ’95

My freshman year I was on Read Second, the first year that South Campus housed men (1969). Things were so different! We had weekly maid service to clean our rooms and change the beds, and most evenings of the week there was sit-down dinner service in the Quad, with student servers bringing platters of food to the tables. For dinner men were required to wear ties and women skirts or dresses. We did wear ties, but usually just looped an old tie around our necks, coupled with a T-shirt. Also, there was no ID check at the dining hall entrance, so if you had friends in town, you could just take them to meals.
— Michael Breed ’73

Back in the ’60s, North Campus housed men, and South Campus housed women. Women could have male visitors on Sunday afternoons with doors left open and “three feet on the floor.” You had to yell “man on the floor” when bringing someone in, because women tended to wander around en dishabille.
— Shirley Neuhaus Hoops ’64

Younker coed bathrooms, of which there was only one on each wing. So as to even out the onus of having to walk aaaalllllll the way from North to South or vice versa, we collectively agreed to switch every week which was the men’s bathroom and which was the women’s. I just remember sleepy Monday mornings were often jumpstarted when a naked other-gendered person entered the (gang) shower area.
— Alison Gode-von Aesch Rhoades ’87

With coed restrooms — the breakdown of gendered social norms was interesting — like the first time as a very female-identifying person one is in the restroom brushing one’s teeth and a very male-identifying person comes in to brush his teeth. (Also, people turned many of the main rooms coed even if they weren’t officially.)
— Rachel Liberatore ’01 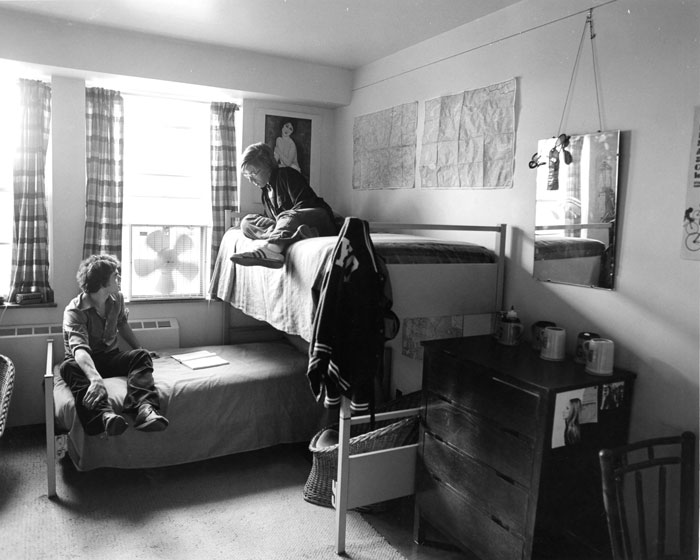 When I came back from London, I got a loggia room on a floor with several of my friends (Cleveland Second, spring 1986). We were all juniors, so we had singles, but we would often just collapse in the hall and yabber. Also, my dad sent me back to school with a small black-and-white television, and I kept it in the hall. People would plunk down and watch it. I worked at Quad, and one day I came home from working lunch and found lots of people circling the TV. The space shuttle had just exploded.
— Pamela Hope Feinstein ’87

I remember just hanging out in the hallway with other dorm residents of all ages. We had quote boards to keep track of all the hysterical things we said. I learned about Danny Elfman, kimchi, and how to feed piranhas.
— Julie Whiston ’97

Grinnell’s dorm life was better than I had hoped and way more boring than I expected.
My first year on Loose First, my roommate and I were sitting in the hallway in pajamas talking with a small group of other people. There’d been an all-campus party of some sort, and people were still up talking. A fourth-year student walked up, looked at us, and said, “Oh my god! That’s so great that you guys are roommates and you have matching pajamas.” We hadn’t realized it until she said something.
— Glenden B. Brown ’91

Quote boards! Some of my favorite memories were etched in multicolored marker reminding us how clever/drunk/funny we all were. A bad day would disappear with a quick read of the hall quote board!
— Rachel Bly ’93

In my first year (fall 1994) on Loose Third, someone convinced the floor that if you mixed tempera paint with liquid dish detergent then you could paint on the walls and it would just wash off. So we painted fabulous murals all over the hallways... only to discover 9 months later that while the paint washed off, the stain was very much there. We spent a lot of time scrubbing, and then we just paid the FM [facilities management] fee. But it was a great floor activity!
— Rachel Weiss ’98

My second-year roommate had a still in the Haines basement. He made rum, and he hoped that the feds would find out and confiscate the dorm. If he had spent half the time on his chem labs that he did on studying his alcohol, he probably wouldn’t have failed out of Grinnell.
— Stephen Hardwick ’89

My junior year I moved into my girlfriend’s dorm room and my single became a party pad. We covered the walls completely with magic marker art. Despite somebody volunteering to take my room the following year, buildings and grounds (B&G) fined me $200 for the special paint needed to forever seal back the magic marker masterpiece of Haines Pit.
— Leslie Ragan ’85

I remember my first year when the junior women on my floor in Gates pranked the male basketball players, who I think all lived in Smith, by switching all their underwear around — so everyone came home to some other dude’s underwear in his dresser. I learned that if you have funny friends, you should probably lock your doors during basketball practice.
— Leslie Boyadjian Stanton ’05

In the Spring 2021 issue, we asked readers to share their experiences in residence halls that helped them see the world in a new way, and we received dozens of responses. Here are some of our favorites. For more, visit magazine.grinnell.edu