As a Grinnell alumnus, former classroom teacher, and current Director of the Center for Careers, Life, and Service’s Education Professions Career Community, I’m always excited to hear about the work alumni are doing in education, the paths their careers have taken, and the lessons they’ve learned along the way. 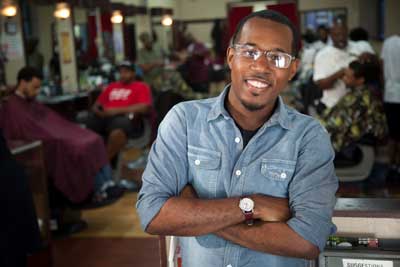 So I was excited to hear NPR’s recent story “Turning Kids into Readers, One Barbershop at a Time” about Alvin Irby ’07 whose “Barbershop Books” project has received attention nationwide. I got even more excited when I heard the NPR reporter was Cory Turner ’98, a senior editor for NPR’s Education team.

Irby’s and Turner’s stories typify those of many Grinnellians. Both had interdisciplinary interests that precluded a linear career path. Turner, drawn to film, completed a master’s program in screenwriting at USC’s School of Cinematic Arts. After that, he took a job as a meter reader, writing screenplays on the side, one of which became the film “Graduation,” which screened at Sundance and was sold to HBO. Irby enrolled in a master’s program at the Bank Street College of Education, then took a job as a Kindergarten teacher at a KIPP school in New York City. Eventually both ended up in their current positions, where they can channel their passion for education. Their stories show that Grinnell alums enter (or create) careers in education in a variety of ways.

I expect that when I bring Turner’s article to the next Education Professions Community meeting, it will resonate with students in the Community for the same reason kids read the books Irby provides: in Turner’s words, “the story will feel a little familiar.”

For more about Alvin Irby ’07 and Cory Turner ’98 see the following: