How does a performance change when the audience consists of just one person? More than three dozen student artists, dancers, musicians, and actors auditioned for eight available spots in a short course that included spring break travel to Taiwan.

During the audition process, the professors were looking for a variety of talents and skills, but just as important was assembling an ensemble that could work together with very little time and under stressful conditions. They needed to have a willingness to collaborate and explore outside their comfort zones. “When you’re given a prompt and have a week to come up with a solo performance, you have to stretch yourself,” says Kaufman.

In Grinnell, during the first six weeks of the course, the students started by creating solo performances, but in Taiwan they created a performance for a solo audience. “In a conventional theatre production, the actors can’t see the audience. All they see is darkness; the audience is an abstraction,” says Quintero. “Performing for an audience of one, you look them in the eye and there’s an immediate connection.”

Because the performance was site specific, much of the work could not be finalized — and some couldn’t even begin — until the students and professors arrived at the Taipei Museum of Contemporary Art.

“Having worked with Craig on several shows, I knew that what we were going to do was going to be intense and abstract, and the project would be continuously developing until the day we opened,” says computer science and theatre and dance major Sooji Son ’18.

Over the course of only five days, the performance was prepared — a room in the museum was transformed, a set constructed, and a 10-minute production finalized.

The students and members of Riverbed Theatre performed for 60 individuals, one at a time. In addition to requiring physical stamina from the students, 12 performances a day over five days stretched them mentally and emotionally.

“This was not merely a theater performance but a dynamic interaction and communication between the audiences and the performers and space,” says prospective art major Yi-Chia Wang ’20. “The actions we did could be simple, but the images created by these actions in the particular space were very powerful.”

Audience members could respond to the experience in writing, and many did. Some were brief but enthusiastic, others wrote poetry or made simple drawings, and one woman wrote for a solid 45 minutes about the 10-minute performance. The audience included international curators from the Performa festival in New York, the Great Theatre of China in Shanghai, and the Taipei Fine Arts Museum.

Some students who came to the class viewing themselves as performers immersed themselves in design. Others with very little stage experience surprised themselves by gravitating toward performance. “Seeing the audience reactions at such close proximity was new to me,” says Son. “I am usually backstage or running tech in the booth, far away from them.”

Both Quintero and Kaufman stressed the significance of having the opportunity to both shape an international performance and for that performance to be on display at a renowned art museum. “If a professor had approached me in undergrad with this opportunity, I’d be terrified and honored,” says Kaufman. 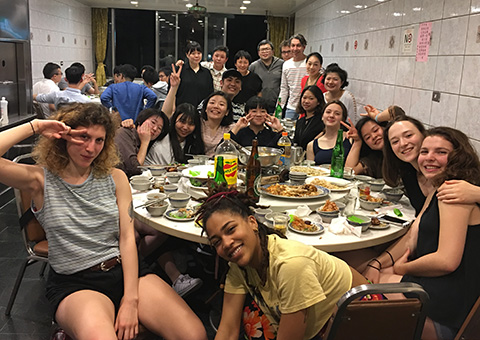 Reflecting on the experience, Wang was grateful for the opportunity to work closely with professional theatre artists in a very egalitarian way. “Usually when people talk about collaboration, they think about everyone contributing effort and ideas to help develop a script together. Since we didn’t have a set script, we just brought our ideas and tried them out every time,” says Wang.

“Being in Grinnell, you get used to the same routine of production meetings, rehearsals, and tech,” says Son. Working with Taiwanese theatre artists gave her the opportunity to observe and participate with a different creative process. Although the method was different, the result was the same: a performance that transported its audience outside of their everyday reality.