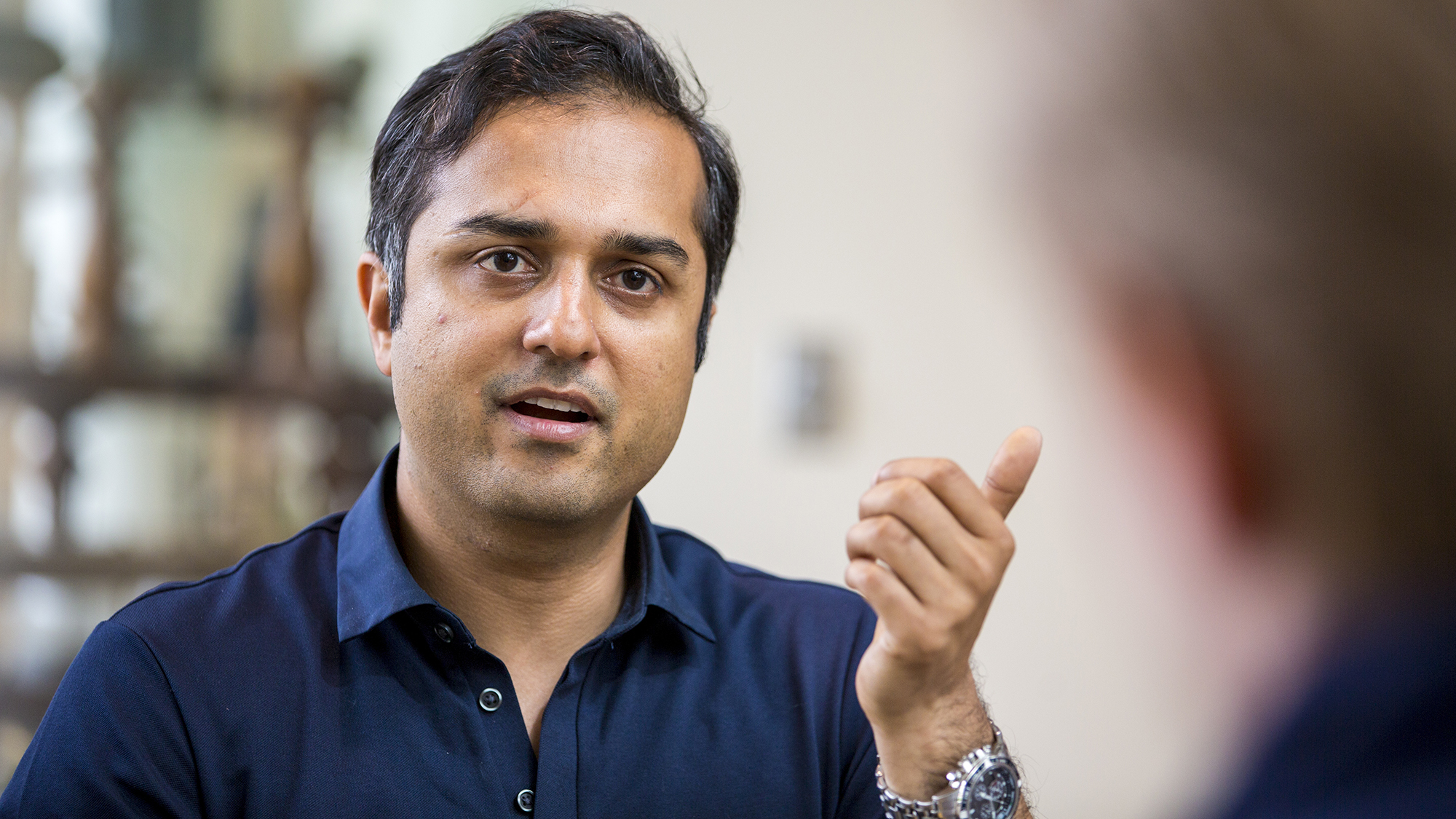 Taking a Chance on Me

When the recession hit in 2008, Rishi Misra ’01 parted ways with Deloitte, a large corporate consulting firm that had employed him for almost five years. This was a gamble not only because he had to find employment, but because the India native also had to restart the green card application process from scratch. If he couldn’t find a company that could sponsor his green card application, he’d have to leave the United States and possibly never return. Time was running out.

In 2009 he landed a job with a startup in San Francisco that hired a small immigration law firm to help. Eight months later Misra had a number in the green card line, but by then the line wasn’t moving.

“It’s important to understand why that happens,” Misra says. “It’s because, in the year 1990, which is when the high-skilled immigration system was last updated, there weren’t that many Indian and Chinese nationals walking around with graduate degrees and five years of U.S. work experience. [In] 2013 or 2017, they’re all over the place. So, the lines for that category, and those countries in particular, are going to be incredibly long. Which is why someone who had come from Pakistan, or Sri Lanka, or Bangladesh at the same time I did, or applied the same time I did, would have been done well before I was done.”

Having to start the green card process over again made him think even more about how the U.S. immigration system could be improved. “Initially I thought there shouldn’t be per-country limits in the employment-based system,” he says, “because I felt like I was being judged based on where I was born.”

He sent a PowerPoint proposal to U.S. Sen. Dianne Feinstein’s (D-Calif.) office in California, and her staff invited him to come and present it. “I said, ‘Here’s the issue. I’ve been in the country for over 14 years and in this process for [5-plus years]. It doesn’t seem like this line’s going anywhere. Why am I being judged on my country of birth and not my contributions?’”

Feinstein’s staff told him that if you remove per-country limits, people from less populous countries won’t get a chance in the employment-based system because India and China would dominate the whole quota. Misra thought that was fair.

“One of the things I value about the United States is diversity of national origin,” he says. “I think that’s important for this country to keep, for its long-term competitiveness, for attractiveness to other countries, or other immigrants, really.”

So he wondered what else could be done to fix the employment-based immigration system. “The answer to me was quite fundamental. Why not just raise the bar so that these lines don’t get that long?”

Intent on sharing his views about how to fix the system, in 2013 Misra started attending meetings held by FWD.us, a political advocacy group founded by Mark Zuckerberg, Bill Gates, and Reid Hoffman — the Who’s Who of tech — to modernize the immigration system and keep the United States competitive.

They invited him to speak on panels and meet with members of Congress. Misra was also invited twice to meet with the White House’s Office of Science and Technology Policy. “They sought my opinion on what could be done to streamline the high-skilled system,” Misra says, “and also what could be done to attract foreign entrepreneurs to build companies and create jobs here in the United States.”

Meanwhile Misra was still stuck in the green card line. So in 2016, he decided to apply for the “alien of extraordinary ability” category, an EB1 visa.

This is the fastest line and has tougher criteria to qualify. Some of the 10 criteria are reserved for artists, entertainers, and athletes. Misra applied for five criteria, including making original contributions of major significance to his field.

“I think that’s a great thing because it doesn’t measure me on contributions to any single company but measures me on contributions to my field, which in a sense are my contributions to the United States,” he says. “I had to have people that I didn’t even know vouch for the fact that the work I had done, in building a company and creating jobs, among other accomplishments, were of major significance. It had to be completely objective and unbiased,” he says. He had to meet three of the 10 criteria to qualify and thinks he got four.

In October 2016, Misra was granted a green card and looks forward to becoming a U.S. citizen by 2021.

Challenges of the H-1B visa

Unlike the EB1 visa that Rishi Misra qualified for based on his individual accomplishments, the H-1B is employer-based. Companies in the United States apply for these visas on behalf of workers they want to hire because they have specialized knowledge, typically in science, engineering, or information technology, and a bachelor’s degree or its equivalent.

Misra worked on an H-1B visa for 12 years because his first employer didn’t follow the green card application process as well as it might have. They parted ways and he had to find another employer who could start the process over.

Misra says, “The high-skilled visa is pretty controversial. One of the issues with that visa is the quota is limited to 65,000, and then another 20,000 for people with U.S. graduate degrees. Most of that quota is taken up by a handful of companies, and when you look at who those companies are, all those companies have outsourcing as a significant business component and revenue source.

“So when I looked at that, I was like, ‘Why are we giving most of the visas to companies that are taking jobs overseas? And these entrepreneurs, who could potentially create jobs in the United States, why are we depriving them of visas?’ I think that part of the system needs to be reformed as well.”

Rishi Misra ’01 was very good at physics in high school, so when his high school physics teacher told him to apply to Grinnell, he did. He was also interested in engineering, so he pursued a 3-2 program in biomedical engineering at Washington University in St. Louis, transferring after his third year at Grinnell. He earned his B.A. in physics from Grinnell, a B.S. in biomedical engineering at Washington, and then an M.B.A there too.

One reason Misra wanted to stay in the United States was to do something innovative in biomedical engineering, which he couldn’t do back home in India. Bangalore has since become India’s version of Silicon Valley, but when Misra was looking for work in 2003, it wasn’t yet.

Misra has worked for a handful of companies, always seeking new opportunities to challenge himself. He’s passionate about preventive medicine. For the past four years, he worked on “this pretty innovative product that takes data from a patient's medical record, plugs it into a very sophisticated mathematical model, and predicts their risk of chronic conditions — like heart attack, stroke, diabetes, things like that — and helps doctors work with those patients to reduce that risk.”

In June he took a new job with a startup funded by Boston Consulting Group’s Digital Ventures arm and the American College of Cardiology. He says they’re “doing very cool things with data, measured by a noninvasive device that’s just kept under someone’s bed. It takes data from a patient’s heart to again try and predict when something bad is going to happen and prevent that from happening. Because when a patient has that first event, their life changes, and we want to make sure that first event’s avoided.”