The Loneliest Band in France 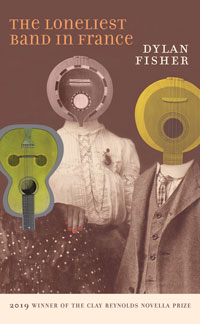 Mistaking an ad to join the Loneliest Band in France for one to sell his blood, the novella’s narrator finds himself instead under the sway of the band, drinking heavily and being recruited to play a battle-of-the-bands-esque concert (that night) at the local Café Bovary. Not only is there prize money attached to the concert, the bandmates also see this as an opportunity to debut a new song — one, they claim, that can hurt — even kill — its listeners. The Loneliest Band in France (Texas Review Press, 2020) won the 2019 Clay Reynolds Novella Prize and is the first book by Dylan Fisher ’14.