Seventy Years in Academe: A Memoir 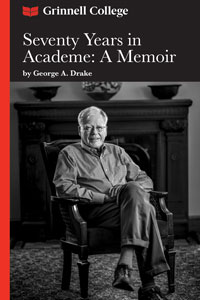 From his undergraduate experience at Grinnell in the 1950s to his retirement from Grinnell at age 85, George Drake recounts the story of his 70 years as a student and educator. He recollects the influence of his Grinnell professors, such as Joe Wall, Homer Norton, Fred Baumann, and John Kleinschmidt. After graduating in 1956, Drake spent a year in Paris on a Fulbright scholarship, studied for two years at Oxford University as a Rhodes Scholar, and completed graduate work at the University of Chicago in 1964. He began as an assistant professor at Colorado College and rose to become dean of the college and implement the distinctive Block Plan. In 1979, he was appointed president of Grinnell College, serving until 1991, and he reminisces about the innovations and crises of his tenure. In 1991, he and his wife, Sue, spent two years as Peace Corps volunteers in Lesotho. In 1994 he returned to Grinnell and taught full time for 10 years and continued teaching part time until 2020, particularly enjoying teaching the First-Year Tutorial.