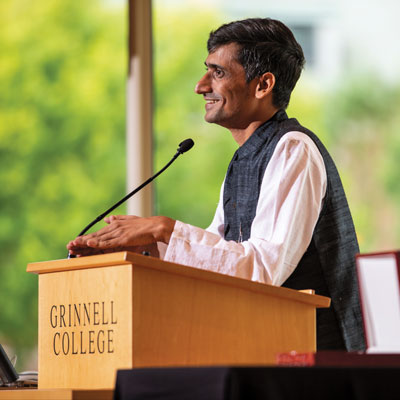 The $100,000 Grinnell College Innovator for Social Justice Prize was awarded to Shafiq R. Khan, founder and CEO of Empower People. Khan and Empower People have been instrumental in the fight to eradicate bride trafficking in North India and in empowering the independence, agency, and leadership of girls and women who have been affected by this issue. He came to campus in October to share his work.

To hear Kahn discuss how he became involved in the fight against bride trafficking, his vision for the organization, what he has learned from working with survivors and other feminist mentors, and the significance of the Grinnell Prize to their mission, listen to episode 2 of season 2 of All Things Grinnell, available wherever you listen to podcasts.