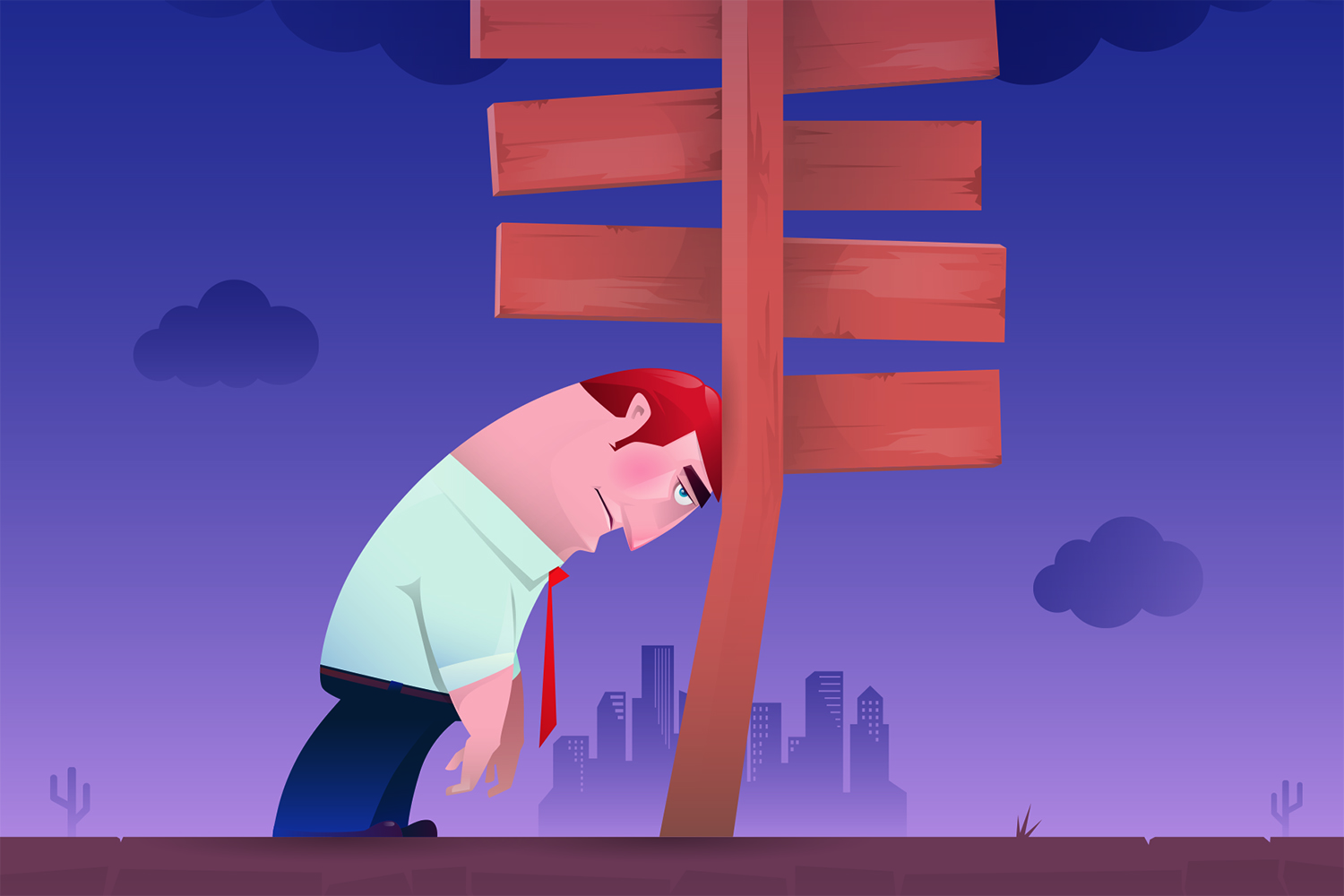 Is Less than Perfect Enough?

Grinnellians expect big things from themselves. So what happens when expectations and real life collide?
Erin Peterson ’98

“I felt like a complete failure at life. It was bad, and I didn't tell anybody for a really long time.”

For years, Amy Hagan Ketteran ’97 seemed to have everything all figured out. A successful muralist and business owner, she was making money doing work she loved, and she was teaching others to do the same. She was president of an international arts organization. She and her husband Mark Ketteran ’97 had a young child and another on the way.

And then the 2008 recession hit. Work dried up. Their credit card bills mounted, and the pair could no longer afford to pay their mortgage. Their electricity got shut off. They struggled just to buy food. “I felt like a complete failure at life,” Amy Ketteran says. “It was bad, and I didn’t tell anybody for a really long time.”

If the struggles that the Ketterans faced would have been difficult for anyone, Amy says that her Grinnell degree made the sting of their circumstances especially sharp. “I was supposed to be smart,” she says. “I felt like I wasn’t living up to what I should have done with my education.”

Grinnellians are bright, idealistic, and motivated to succeed. But they are not invincible. A poor decision, a health crisis, a divorce, or a series of unlucky breaks can derail Grinnellians with even the most promising paths ahead of them.

Facing real failures — setbacks that require us to recalibrate our expectations of ourselves or even the trajectory of our lives — can be heartbreakingly painful and disappointing. But they can also make us more empathetic, open us up to the generosity of others, and give us the opportunity to help others struggling with similar issues.

For Amy Ketteran, who is now working as a day care provider and whose family is still digging out from those rough years, a turning point came in 2014. After a frustrating morning, she posted about her struggles for the first time on Everyday Class Notes, a 4,000-alumni-strong Facebook group. “It felt weird, but I knew if I didn’t get it out, I would explode. I needed to talk to someone, and the only people I was going to see that day were under 6 years old.”

She returned to the post a few hours later to find hundreds of supportive responses. “People cared,” she says. “They were there, they were listening, and some of them said, ‘Yeah, my life’s not that great, either.’ I was crying. It made me feel not so by myself.”

Telling the stories and mining the lessons from our darkest moments — or simply the stretches that will never merit a classnote — won’t guarantee that we’ll make our way to some better-than-imagined future. But they can be a welcome counterbalance to the endless stream of upbeat Facebook posts and perfectly filtered Instagram photos that make everyone else’s lives seem flawless. And sharing our setbacks can remind anyone who is struggling that even in a sea of Grinnell success stories, they are not alone.

By all outward appearances, Christine Newkirk ’02 was a Grinnell success story. A strong student at Grinnell, she was thrilled when her adviser helped her line up a top-notch grad school and research opportunity in anthropology that included free tuition, a generous stipend, and the chance to do research in Brazil over several summers with funding from the National Science Foundation. “It was such a huge vote of confidence,” she says of her adviser’s support.

There was just one problem: She wasn’t particularly invested in the topic, cognitive anthropology. Still, it seemed to be the next obvious step in the trajectory of her career, which she assumed would include getting a Ph.D. and becoming a professor.

And Newkirk had always been good at meeting others’ expectations. “I was really driven to do well and get good grades,” she says. “But that didn’t always include thinking about my own opinions and ideas.”

The focus and drive she had honed to perfection at Grinnell weren’t enough to propel her all the way to a Ph.D. on a topic she didn’t love. She specifically remembers the moment it all came crashing down. On the night she arrived in Brazil for her third summer of research, she knew almost instantly that she’d made a terrible mistake. “I walked into the apartment, and I was bereft,” she recalls. “I just thought, ‘Oh, my God. What have I gotten myself into?’ ”

The next morning, after a run on the beach, she sat down on a wall that overlooked the ocean. As she looked out on the water, she understood with crystal clarity that she couldn’t do the research or the program she’d set out to do. “Even now,” she says, her voice breaking, “it’s still upsetting.”

After four years of grinding away at a topic she couldn’t connect with, Newkirk left her Ph.D. program. She worried that she had disappointed mentors who had believed in her, and she hated knowing she was no longer moving forward in the academic career she thought she wanted.

Since leaving the program, Newkirk has spent years working in nonprofits and mentoring teenagers through a variety of programs. In her role as a high school director at the Heart of Los Angeles, for example, she has particularly zeroed in on the high-achieving kids who seem more focused on garnering praise than finding a passion. “The advice I dispense to them is often about knowing yourself first and then figuring out how to apply yourself, rather than just being concerned about prestige and racking up accomplishment,” she says. “Don’t compare yourself to other people.”

Over the past few years, she has discovered what she is passionate about: education. Now, years later, Newkirk is applying to graduate schools in education, hoping to earn the Ph.D. that eluded her the first time around. She is now more certain in the direction she wants to go, but her previous experiences still weigh heavily on her. “You only live once, and you should go after what you want,” she says. “But the feeling of failure and shame still haunts me.”

Finding a home, and gratitude, in a quieter life

Many times, the lives we carve out for ourselves don’t match up with the grand plans Commencement speakers have dreamed up for us and veer far from even our own ideas of our lives’ trajectories after we graduate.

Alethea Drexler ’00 says she might not have had a clear vision of what awaited her after Grinnell, but she didn’t exactly envision her current life, in which she lives with her parents in a suburb just outside of Houston. She’s there for a complicated mix of reasons — among them, to support her aging parents and save on housing costs so she can live on her modest salary working in the historical archives of the Texas Medical Center. “I don’t have a job that will really support me in a big city. I don’t have a partner or family of my own,” she says. “All of the things that everyone seems to take for granted as cornerstones of life aren’t here.”

She knows she has many things to be grateful for: her health, a job she generally enjoys, parents she loves. Still, she sometimes wishes for a bigger life. “I should have pushed myself harder for my own sake and gotten that library degree, but I’ve lost the steam for it now,” she says. “It’s not as though I’m suffering, but my life is very quiet and small scale.”

Bill Turner ’87, meanwhile, admits he sometimes feels frustrated with his life, which looks little like what he had expected. After sailing through Grinnell and finishing his Ph.D. program almost effortlessly, complete with peer-reviewed and prize-winning papers, his ascent up the academic ladder seemed all but assured.

But after a series of one-year contracts and administrative positions at three universities, he stalled out. He went to law school and graduated, and found work on a legal history project he enjoyed. But it was short-lived. “The HIV that I had been ignoring for two years finally caught up to me, and I had to quit working,” he says. “I muddle along, and at the moment, I have one project I’m working on that may yet allow me to salvage a real life from the current mess. We shall see.”

And while he acknowledges that “we’re never supposed to admit failure,” he says he truly works at feeling gratitude for the good things in his life, including a stable family growing up, a strong education, and being gay, which he believes has allowed him to meet people and have experiences that would have been possible no other way.

A move from reaching up to reaching for each other

“It’s so hard, when you’re in the trenches, to see that there’s a way out,” says Amy Ketteran. “But if you can be honest about what’s happening to you, you never know who might be out there to help you out. Maybe they’ll just hold your hand for a minute. But sometimes that — just that — can make a difference.”

Learning How to Fail

When new students arrive at Grinnell, they’re often used to being among the best at what they do, both in the classroom and beyond it. But that can change quickly when they join hundreds of other similarly brainy students, tackle classes that are a big step up from high school, and adjust to living on their own in a new community.

Whether students are struggling with classes, relationships, depression, or any of the myriad issues that can come up during big transitions, College faculty and staff can often give students the advice and resources they need to make changes.

Academics can be a particularly fraught area for students who are used to doing everything perfectly on their own, says Joyce Stern ’91, dean for student success and academic advising. “I think that students sometimes think that ‘adulthood’ is about complete independence and doing everything by themselves,” she says. “But of course adults ask for help all the time, whether it’s hiring an accountant to help with their finances or talking with their friends to get help with parenting. But that’s what we’re supposed to do — to get guidance when we need it.”

A robust array of tutoring services and programs, including the Writing Lab, Math Lab, and Science Learning Center, are all designed to help students get back on track.

Even for students facing serious consequences, such as academic suspension, Stern tries to reframe the suspension as an opportunity, not a banishment. Many students return after a semester or two off to deal with whatever has derailed them, whether it’s a family issue, substance abuse, or other problems.

“We want to help students understand that something has to change,” Stern says. “We want them to know that we really are on their side; we don’t want them to be paying thousands of dollars for something that isn’t working.”

For many Grinnell faculty and staff, helping students accept and learn from their failures is a big part of their job. Jen Jacobsen ’95, director of wellness and prevention and assistant track and field coach, says athletics can be particularly “failure-friendly.”

“Some of us are really intentional about asking athletes what went well after a performance, even if the overall result is not what they hoped for,” she says. “One of the biggest lessons I want them to draw from a competition is that no performance is an unmitigated disaster — let’s find the parts under their control that they did well and what we need to reinforce in practice. Also, sometimes they can do everything ‘right’ and still not achieve the outcome they hoped for. That’s frustrating, but it’s why we work on valuing the process as well as the outcome.”