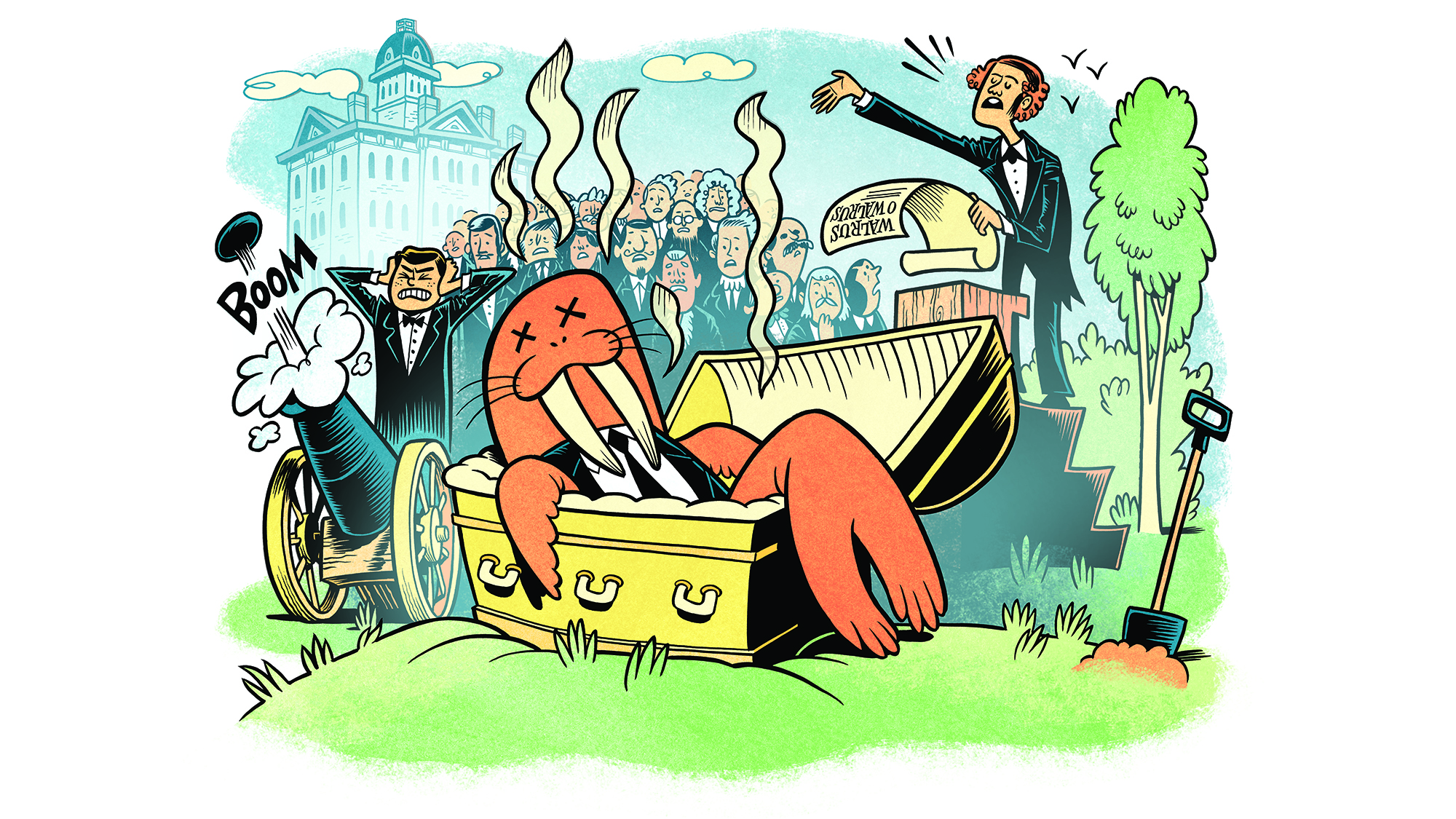 Shenanigans include a stuffed walrus, a cannon at midnight, and a presidentially authorized skip day
by Erin Peterson ’98

A desire to craft and carry off the perfect prank seems etched into Grinnellians’ DNA.

Take, for example, the walrus incident.

In 1871, after one of the College’s two buildings burned to the ground, a casualty was a stuffed walrus, part of the school’s natural history collection. A faculty member believed the animal could be restored and kept it in a hallway of the remaining building for months. But as the decaying walrus grew increasingly fragrant, a group of students — led by sophomore Henry Carter Adams 1874, son of Grinnell co-founder Ephraim Adams — decided that the mammal needed to be disposed of after a proper send-off. They wrote a poem for the animal, buried it outside of the building, and shot off a cannon at midnight to honor it. (Why the school had a working cannon on campus remains murky.)

President George Magoun was furious about the shenanigans, and after delivering a long lecture to students in the chapel the following day, he suspended a freshman who was involved in the prank. (In true Grinnell fashion, the entire first-year class took action: They went on strike in support of their fellow student, who was later reinstated.)

To find out more about some of the great Grinnell pranks through time, we’ve combed through the College’s archives, interviewed alumni and administrators, and shared the playbooks of Grinnell’s greatest mischief-makers.

The most spacious room on campus 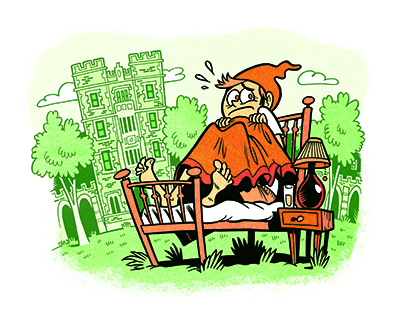 In the 1996 documentary Grinnell Stories, Augusta “Gus” Towner Reid ’28 recalled a young student in Langan Hall who slept like a rock and was often the target of practical jokes because of it.

One night while he slumbered, fellow floor members took everything from his room — dresser, lamp, the bed with him in it — out onto the lawn near Mears Cottage. They perfectly replicated his dorm room layout near the path students used when they returned home from that night’s dance. As couples gawked at the peacefully sleeping student, he was none the wiser. “Only when he woke up in the morning did he realize what had happened to him,” Reid recalled.

The president’s popularity ratings had never been higher

In 1976, Doug Dohrer ’76 helped orchestrate a prank that had a campuswide impact. He agreed to confess to his involvement with some apprehensiveness. “My bag is packed and my passport is up to date, just in case I have to flee,” he jokes. He shares his memory of events:

“One dark evening, knowing our beloved President A. Richard Turner was out of town, a group of students decided it was time for the annual springtime Skip Day. Gently letting ourselves into the president’s office, we borrowed some official stationery and wrote up a declaration announcing the cancellation of all classes for the following day, complete with music and games. We thoughtfully signed his name. 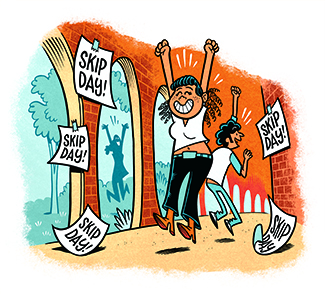 “We made a few hundred copies and discreetly distributed them around campus at the library, the Pub, dorms, everywhere. In short order, we gleefully witnessed our fellow students pouring out of the dorms and the library to party like there was no tomorrow.

“The running dogs and imperialist lackeys at the campus radio station tried to say it was bogus, but the horse was already out of the barn. Our revolution was complete.

“I can only hope that the statute of limitations has expired for this heinous crime.” 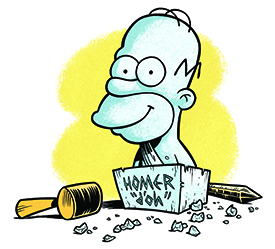 Serving either as inspiration or intimidation, the names of some of Western civilization’s greats — Dante, Plato, Homer — are chiseled directly into the stone of Grinnell’s Carnegie Hall. But in 1997, some students decided that there was another Homer worth honoring: Homer Simpson. Students hung a giant image of the animated family man beneath the Homer name.

The reason behind the student-created campaign, according to a letter in The Scarlet & Black, was to raise awareness of “the division of labor and the exploitation of the proletariat” and to demand that the College observe Labor Day by giving its employees and students the day off.

The administration didn’t change the academic calendar, but they did acknowledge the effort: For the phonathon that followed, all volunteers got a T-shirt with a photo of the cartoon-covered building that said “Phone Homer.”

Few people make better prank targets than earnest first-year students. At the beginning of one academic year in the early 1980s, all first-year students got official-looking invitations to a pizza party, ostensibly hosted by President George A. Drake ’56.

The only problem? Drake wasn’t in on the joke. Students began arriving at the president’s house, but Drake was out for a run. His wife Susan Ratcliff Drake ’58 delivered the bad news to the arriving crowds.

Drake says the joke didn’t anger him — it inspired him. “It was a pretty good prank — and a great idea,” he says. “It made us realize we should do something like that.” To recover, the Drakes began hosting ice cream socials, which became a much-loved tradition for students.

Wait, it’s not “pranks and circumstance”? 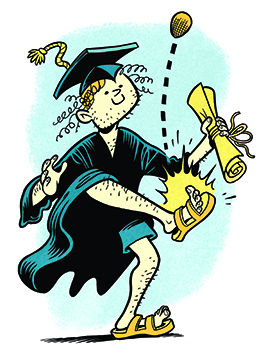 Graduation often brings out the best in student ingenuity. As their final official acts as students, many Grinnellians decide they want to get the last laugh.

Drake, president of the College from 1979 to 1991, always arranged for a table to be placed on the stage next to the diplomas, just so he’d have a place to put all of the “gifts” he received from students as they shook hands with him at the ceremony. “One year, I shook hands with a student and it was a mannequin arm,” he says. “I just pulled it right out of the gown.” Another time, in the late 1980s, a student flipped a Hacky Sack into the air and waited for Drake to respond. “I hit the ball with the side of my foot and it bounced right back into his hands. I couldn’t have done that if I tried a hundred more times,” he says, still recalling the perfectly precise kick joyfully.

Word was that all the fish received honorary degrees

Great practical jokes are rarely the work of a single individual. Over the years, students have coordinated their efforts at graduation ceremonies. One year, graduating seniors assembled a massive puzzle of a photo of President Pamela A. Ferguson. Another year, during Drake’s presidency, seniors crossing the stage handed over dozens of individual marbles and finally, a marble raceway. 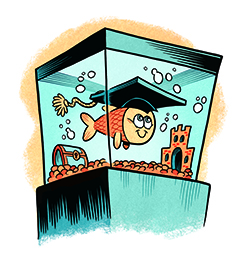 In 1994, a prank made a particularly big splash. Scott Ihrig ’94 coordinated efforts to help students to create a fish-filled aquarium on the graduation stage. Students who were eager to participate each took individual elements up to the stage, Ihrig explains. “It started with a small black acting cube from the theatre that was placed downstage center, then the glass fish tank, then disposable cups filled with gravel, then the same cups with water, then the castle for the tank, then the fish,” he recalls. “Pam [Ferguson] took it in good stride, and it turned out to be a clue to my career path: I opened an event design and production company that creates live experiences for big corporations.”

But for Ihrig, the joy for him is not that he was the prank’s mastermind — but that he was just one part of a larger achievement. “I’m glad it was a group effort,” he says. “It took a whole class to make it happen.”

On the plus side, he never denied his god complex

Plenty of offbeat candidates have entered the race for president of the Student Government Association, including Tripod Bob, a beloved three-legged campus cat. But the most successful was David Kramer ’80, who in 1979 ran as a messiah — not for a yearlong post, but an eternal one.

In an S&B interview, Kramer-as-messiah campaigned on issues including the liquidation of the $60 million endowment to support free morphine for all students, support for coed bathrooms, and a promise that if plans moved forward to tear down Mears Cottage, he would personally “tear down the trustees.”

Kramer ultimately prevailed in a runoff vote, 357-240, over a more traditional student candidate. (“My prophets helped me immensely,” he said in a follow-up S&B interview, in reference to campaign pals Bob Weiss ’80 and Chuck Platter ’81.) As for the work of his presidency? With Mears still in use and coed bathrooms the norm, one might say his desire to have an everlasting impact wasn’t so far-fetched after all.