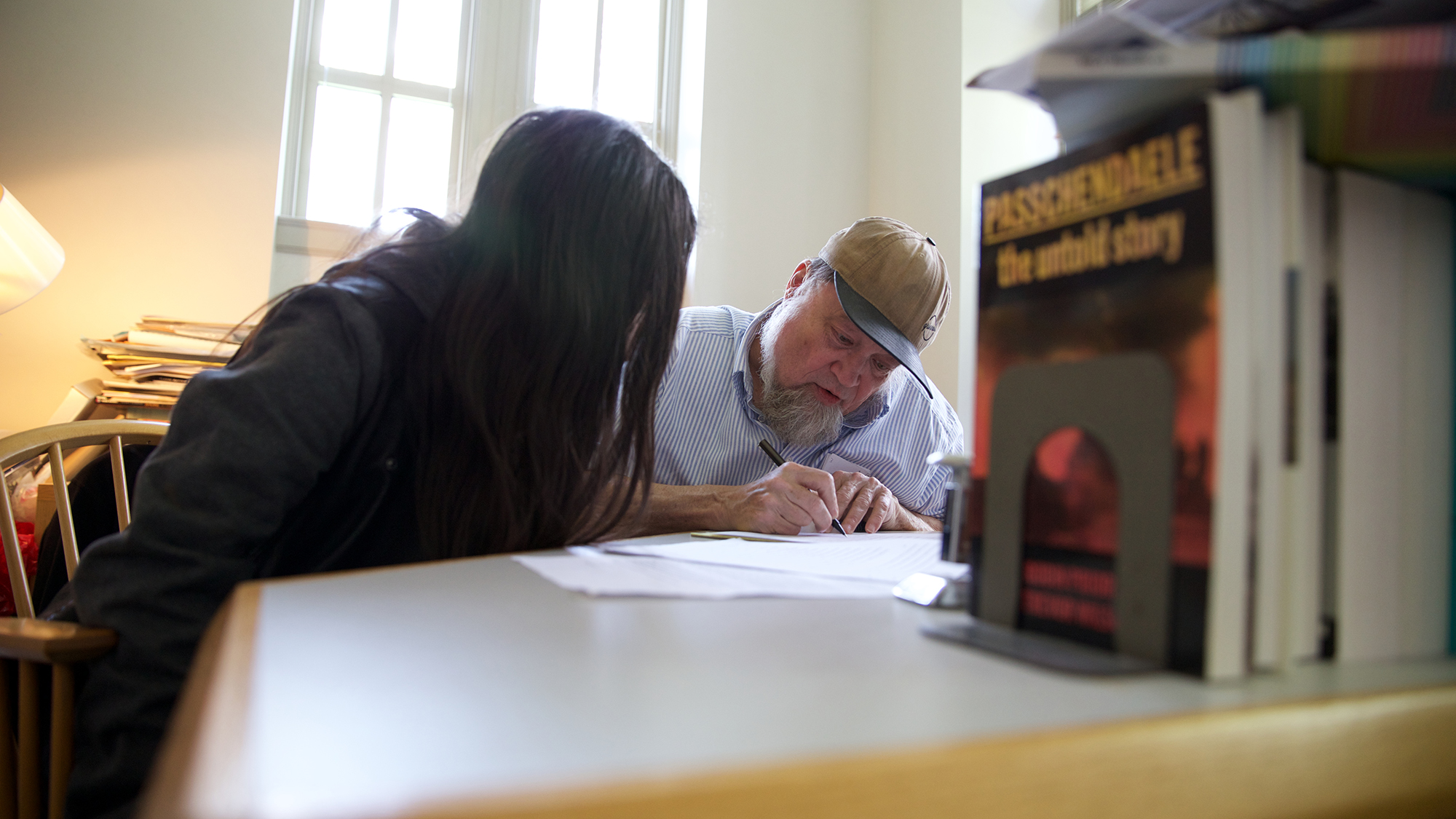 On a cold March day, Alejandra Rodriguez Wheelock ’17 arrives right on time for her Writing Lab appointment with Kevin Crim, Writing Lab assistant and lecturer. She grins, shrugs out of her backpack and coat, and hands Kevin draft number four of her essay, “The Basic Principles of Long-Distance Running,” for Dean Bakopoulos’s course in creative nonfiction.

Kevin and Ale (pronounced “Allie”) sit side by side at a table piled high with books. Through the tall windows of Kevin’s office — northeast corner of Alumni Recitation Hall (ARH), ground floor — they could see bare sycamore branches and leaden sky, but they pay no mind. Their attention is on Ale’s essay.

“I’m happy with the content,” Ale says. The essay has been workshopped in class, and Kevin has responded to content and structure in earlier appointments. “I want to review the editing.”

Kevin nods and begins to read aloud, exactly as the piece is written, so Ale can hear for herself where a word may not be the best choice — a “this” rather than “the,” “through” instead of “across.” Ale is from Guatemala and English is not her first language.

He reads, “I felt the hospital.”

Ale stops him. “Okay, left,” she says, and he notes the change on her draft.

Kevin reads with a pen in hand, following each line. He reacts as a reader and notes problems — all are minor at this stage of her draft.

“I like to hear my own voice,” Crim jokes when asked why he reads each student’s work aloud.

In fact, it’s emblematic of the kind of work the Writing Lab staff does day in and day out — helping students learn to recognize problems in their own work and figure out solutions.

“Our model is one-to-one tutoring,” says Janet Carl, director of the lab, “and that’s what we do most of and that seems very effective. One person giving you everything they’ve got in terms of feedback, and conversation, and respect, and support. That’s a good deal for a writer.

“It’s really become a major part of the way the College teaches writing,” Carl says, “although certainly we believe we’re working fully in partnership with the faculty. It’s not the primary source of instruction at the College, but it is a major resource that this College offers.”

The way the Writing Lab approaches the teaching of writing — primarily individual appointments with students who are coming in because they want to — fits neatly with Grinnell’s individualized approach to education.

But it wasn’t exactly planned that way.

In the late 1960s, like many other colleges and universities, the Grinnell College faculty voted to eliminate the core and distribution requirements and adopt an individually advised curriculum. This took the onus of teaching writing off the instructors of Humanities 101, which had been a required course.

Then, says Waldo Walker, professor emeritus of biology, they all realized: “Oh my god, we’re not teaching students to write anymore.”

The First-Year Tutorial, which had been pilot-tested but was not yet required, became the only required course. As a result, the responsibility for teaching writing spread across the curriculum, but not all faculty members were comfortable teaching students how to write.

Walker, who was dean at the time, set up summer writing seminars for faculty teaching the tutorial. “It worked,” he says.

But students don’t typically learn to be good writers from a single course or a single semester. “I needed a couple people we could refer students to,” Walker says. He knew two faculty spouses, Jan Irving and Linda Finton Morris ’61, who had expertise in writing. (Morris went on to get her doctorate in English and teach at the University of California-Davis.) Then Walker asked Mathilda Liberman to help out.

“[He] asked me to meet with a few of the students one by one to discuss their writing problems,” Liberman says. “One or two resident advisers were assigned to help me, part-time. We met with our students in one room or another. It was all very casual, unstructured.”

The Writing Lab came to fruition in 1973.

“I had no vision of the Writing Lab,” Liberman says. “In fact, I expected it to be canceled almost right away, but Dean Walker had plans for our future.”

“Mathilda shaped the lab,” says Betty Moffett, who was hired as a Writing Lab assistant in 1973, became the director in 1998, and retired in 2000. “She made the lab respectable. She had the admiration of every faculty member that I know of. I think she kept the Writing Lab from being a second-class citizen. She raised its status so people respected the work we were doing and the people who were doing it.”

One way Grinnell’s Writing Lab stands out compared to writing centers at other colleges, although it is not unique, is in the use of professional staff. The staff grew over time to five full-time people with expertise in writing and teaching writing.

Many of them stayed for years and years. For example, Kevin Crim retired in May 2016 with 41 years under his belt.

Judy Hunter, director from 2000 to 2011 with 38 years total at the lab, worked with Crim her entire career. “His ability to grasp the whole import of where the student is trying to go and then help them is kind of amazing. I loved watching his appointments. I learned so much from him.”

In recent years, partly due to demand for more services, the lab has begun training students as writing mentors, a project Hunter initiated. Mentors are nominated by professors, attend the class they serve and meet with students outside of class to offer feedback. The writing mentors also take a two-credit course taught by Carl on the teaching of writing.

Katherine Tucker ’16, a writing mentor her senior year for two different sociology courses, says, “I would try to get a sense of what the student was trying to convey regardless of what I was reading on the paper.” The temptation for mentors, she says, is to fall into editing mode versus a more global perspective. “I always had to pay attention to what the professor was looking for.”

Using the resources at hand

Some students may feel a sense of shame at needing help with their writing.

Carl says, “I hope students don’t feel that faculty would think less of them because they use the Writing Lab. In my experience, the opposite is true.”

The Writing Lab is “a place that a lot of students don’t find, unfortunately,” Hunter says. “But many students, when they do find it, find it a place of support and one-on-one interaction and friendly people that they maintain relationships with. I still have students I’m in touch with.”

Carl adds, “Success is really linked to using the resources at hand. People who are successful are people who use the resources.”

Ale Rodriguez Wheelock ’17 is the perfect example. The essay she was working on with Crim, “The Basic Principles of Long-Distance Running,” won the James Norman Hall 1910 Aspiring Writer Award last spring.

I remember one young Chinese man who had gone to a very good high school in Nanjing, and he was not used to getting anything lower than very, very top grades. He had a tutorial with Mark Montgomery, who for that time was marking his papers in green ink because red looks like blood and green looks like growth.

This young man came into my office one day just mad. Just mad. He said, “Look at this. I want to write Mr. Montgomery a letter.”

I said, “Let’s think about this for a minute.”

He said, “There’s green ink all over. This has never happened to me before.” In a few minutes, he said, “I’m calm now. But I still want to write Mr. Montgomery a letter.”

I said, “Okay, as long as you let me read over your shoulder.”

He agreed. “Dear Prof. Montgomery. Give me more green writing. You have not crushed me.”

That young man did very, very well at Grinnell College.