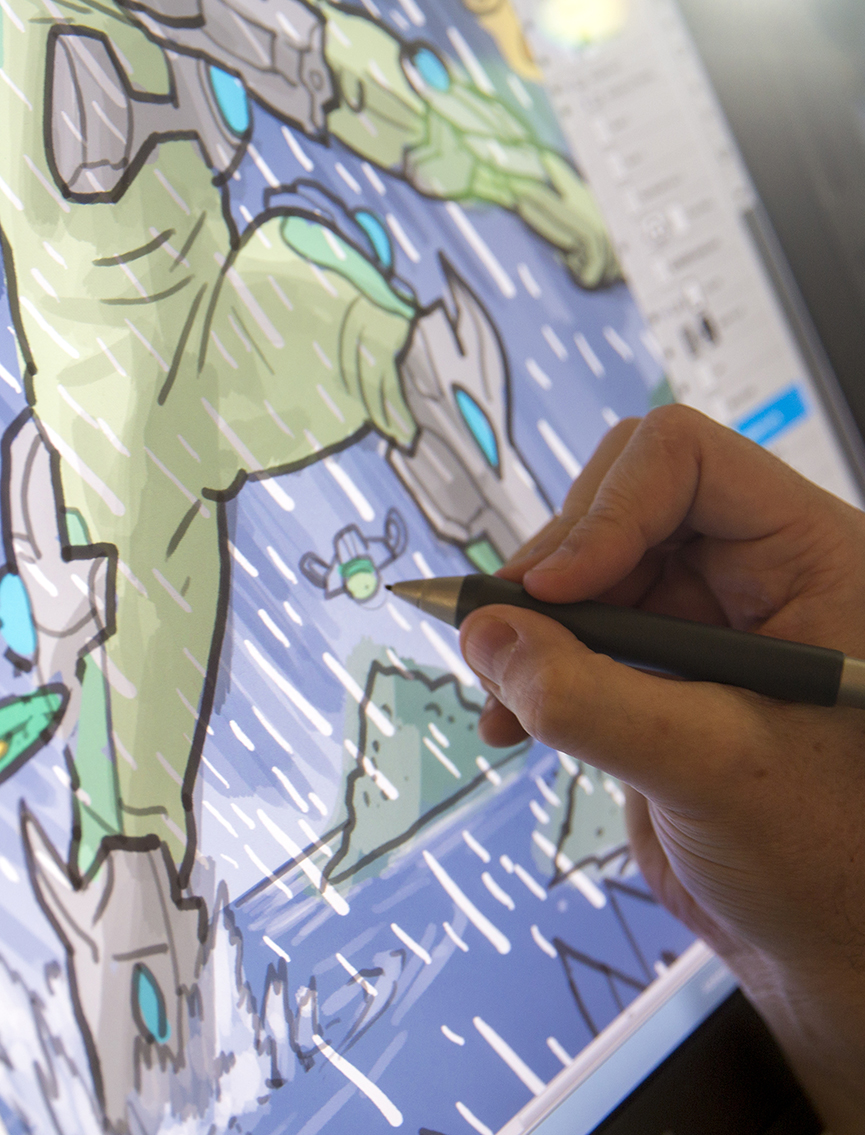 Big Time Attic, the Minneapolis cartooning studio where Zander Cannon ’95 and Kevin Cannon ’02 (no relation) forged their business partnership and later launched solo careers, is a little like your favorite bookstore, toy store, and coffee shop combined. It exudes fun and promises delight.

The evolution of Big Time Attic

Zander and Kevin founded Big Time Attic in 2004 with a third partner. “We thought if we teamed up as this three-part company we could basically be stronger as a unit than individuals,” Kevin says. “That’s when we immediately landed animation jobs with Cartoon Network and a project with Target. And really big stuff kept coming.”

After the animation partner left in 2007, Zander and Kevin focused on illustration and storyboarding.

“For the first seven or eight years, we would work exclusively together on every project,” Kevin says. “I consider those the golden days. We’d be physically across from each other at the table, physically passing pages back and forth.”

Looking at the work later, Zander says he often couldn’t tell whose work was whose.

“It was really good to spend five or six years doing whatever came across, especially adapting to technology,” Zander says. “When I started, computers were barely even a part of it. Everything was done on paper. I was shipping artwork that’s irreplaceable all over creation, hoping it gets there, hoping it gets back.

“It was nice for us to take on jobs that we never knew what we were going to get so we could adapt to that technology, learn a new skill, learn a new program.”

“I think 90 percent of the skills that I have now I was basically forced to learn on the fly over the last 10 years,” Kevin says. “That’s what I love about the variety of client jobs. From designing a family fun center theme park or buttons or websites, I’m always pulling skills that I learned on one job and using them on another job.”

Over the years, they worked on many nonfiction books — about space, evolution, rhetoric.

“I like the [projects] that are like, ‘We’re going to try to explain in the simplest possible terms these vague concepts,’” Zander says. “Where you have to draw things that are noncorporeal.”

“Or don’t even exist,” Kevin adds. “I wish the books we make now were around when we were learning and growing up because they would have been so helpful.”

"There's essentially no money in this business so you should always follow your passion.

The siren call of fiction

And then for fun, Kevin wrote an arctic adventure graphic novel, Far Arden, published in 2009.“It got nominated for awards and got a lot of critical attention,” Zander says. “Then I did a graphic novel basically in the same mold as Far Arden, called Heck. By the time that was finished, I felt like I really wanted to do fiction again. I hadn’t done fiction for years.”

Heck received critical attention too. After that, Zander says, “The fire went out of me for nonfiction.”

“There’s essentially no money in this business,” Kevin says, “so you should always follow your passion.”

Since fall 2014, Zander’s passion has been funneled into his own monthly comic book series, KAIJUMAX, about giant monsters in a maximum-security prison. “It’s for diehard fans of monster movies and prison movies. It’s so genre-based,” Zander says.

It takes him five or six weeks to create a comic. “I’m writing and penciling and inking and lettering and coloring. I’m writing the letters pages. Basically everything. I have one assistant on colors,” he says.

“I used to be a little more like let’s jump in and do page one. Now when I’m doing KAIJUMAX, I do it all visually before I write a word because that gives me the pacing of it, and I make sure there are no boring panels. They all have to communicate something visually.

“Only when I’m doing tightened up pencils do I actually do final dialogue. It helps too because it keeps me from being too wordy and lets me see what I have already explained through the visuals.”

The series has a six-issue season, similar to a TV season. “Then I get a break,” Zander says.

The first season “ends on sort of a cliffhanger, but basically that starts a new story,” Zander says. “I like each issue to have its own little episode and its own little arc and each season to have its own arc and really tell a story. I want to skip ahead in time for the second [season] so that it really starts fresh. If that’s the first issue you pick up, you’re not behind.”

With all the work involved in producing a monthly comic, he no longer takes on clients.

“All the stuff that I used to be doing I can’t do anymore,” Zander says. 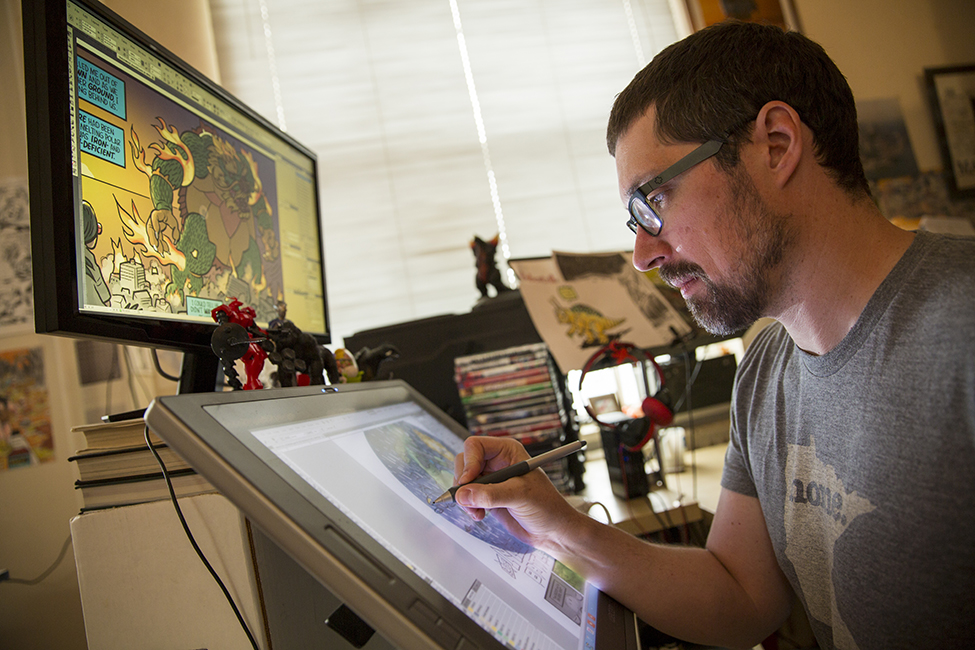 Zander Cannon ’95 draws his comic book series, KAIJUMAX, entirely on the computer. “It has its quirks, like any other tool,” he says, “but I’d never be able to keep up if I did it on paper.”

An approach to nonfiction comics

“I’m the opposite,” Kevin says. “I think my career has gone more down the path of client-driven. Small projects. Big projects. And very diverse projects from mugs for Starbucks in Seattle all the way to doing large graphic novels.”

In 2014 Kevin co-wrote The Cartoon Introduction to Philosophy, published in 2015 by Hill and Wang. His co-author, philosopher Michael Patton, supplied a prose document that provided the chief narrative conceit of a river and the basic points of view of the major philosophers.

“Experts are too wordy,” Zander says. “When you’re writing comics, you can’t make those word balloons longer than a Tweet. We’ll be able to do a better job at coming up with metaphors and narrative structure.”

“I took the master document and broke the whole thing down into an outline to try to tease out what the major elements were,” Kevin says. “I created a script out of it, which was actually kind of easy after doing 1,000 pages of personal graphic novel stuff. At a certain point, you get into the rhythm. I could see a joke clearly goes here. Here’s a good page break.

“Visuals all came later. It’s all white guys. How do you make them distinct? I really wanted to push the caricature aspect of each of the philosophers so when people heard Descartes, they saw this guy with this mustache and this flowing hair.”

How comics have changed

“There are essentially no rules in the comic book industry anymore,” Kevin says, “which is exciting. On one hand, it’s a very Wild West atmosphere, but it’s also a little frightening too to people like us who grew up with this track to become a comic book artist, and now we just have to wing it for the rest of our lives.”

“It increases my appreciation for pen and paper but only for the things that pen and paper really provide,” Zander says. “If I was going to draw something with a pen, I wouldn’t make it neat. I hand-letter the book even on the screen. I like keeping a little bit of that wiggle.”

When they were kids

“I wanted to be a newspaper cartoonist, like Calvin and Hobbes or Garfield,” Kevin says. “Doing the cartoon for The Scarlet & Black was my way of feeling out that process. I had so much freedom, I realized I could never do this professionally.” He drew Johnny Cavalier all four years at Grinnell, in addition to trying other gag strips. Kevin also contributed to The Grinnell Magazine for nine years.

“From about 12 on, I wanted to be a comic book artist,” Zander says. He was the editor of his high school newspaper and did cover illustrations. “Some knucklehead would turn in seven inches instead of 11 so I’d have to fill in.”

At Grinnell, Zander majored in English and worked in theatre. “Theatre was where I felt you were doing art with a purpose,” he says. “Pip Gordon [former assistant professor of theatre] was the tech director and was essentially my adviser. She was really sharp about the use of art in narrative and set design and costume design.”

Kevin majored in art, specifically painting. “I thought the Grinnell art department was great for getting the classical art foundation. I had a great friend in Bobbie McKibbin [professor of art], who was my adviser. She paid attention to what we were interested in. Next class she’d have a stack of books of famous artists so we were constantly inspired.”

Making art and making a living

“There’s a constant struggle between doing what’s asked of you, doing what you think is important, and doing what you want to do, what you need to do as a creative person,” Zander says. “You’re writing stuff that’s meant to sell. Trying to reconcile that commercial aspect of what sells with the things that are in your mind, that preoccupy you, that you want to get out in a piece of art, and hiding them, in my case, in a silly genre story, I don’t think that anything really prepares you for that.”

“I’ll definitely have periods where I feel sort of a void,” Kevin says, “where I’m constantly doing projects that other people tell me to do. It helps me pay rent, but there’s nothing coming from inside. I’m not telling my stories. It’s always good to have a balance. You have to make time to tell your own personal stories.”

“On the flip side, I think there’s a lot of people who only want to tell what’s inside them,” Zander adds. “I feel like those people wash out pretty quick. You can’t throw yourself 100 percent into everything. They ask for a logo. Give ’em a logo. Don’t give ’em a $20 million ad campaign. Save your care for something that deserves it.”