Grinnell’s 26-member Alumni Council came together on campus March 7–9. The weather was typical Iowa — snow, rain, ice, and some sun — but indoor spaces in both the Joe Rosenfield ’25 Center and the partially finished Humanities and Social Studies Center (HSSC, now shortened by students to “husk”) were warm and welcoming.

The council discussed two topics of significance to the entire Grinnell community.

The first of these discussions focused on the issue of civility and possible strategies that the Alumni Council might use in facilitating discussions within the larger College community. The subject was originally raised at our fall 2018 meeting when Development and Alumni Relations (DAR) staff shared reports of several unfortunate incidents where courtesy and respect among volunteers and between volunteers and staff at the College were lacking. An ad hoc committee of the Alumni Council has been formed to further explore how our alumni volunteers and the broader alumni community can affirm Grinnell’s common values and focus on making alumni events safe and respectful experiences for all.

The second conversation explored the role of the Alumni Council in supporting engagement and communication among Grinnell alumni and between the alumni body and the College when major issues arise on campus. Because the council represents a broad and diverse group of alumni, we have the opportunity to pass on information and facilitate discussion and debate within our community — to involve Grinnellians in ways they have valued since their own days on campus.

New efforts to reach out to alumni are already under way from DAR personnel. The mechanics of communication present challenges: How best can we solicit your opinions? How can we engage you in dialogue with others in the community? We welcome your thoughts as we go forward. Incoming council president Ryann Haines Cheung ’93 will distill the ideas generated within the council and incorporate them into its work for the upcoming year.

Final agenda items on Saturday afternoon were the announcement of new members, who began their terms in late May following Reunion, and a vote on the new president-elect. Those joining the council include Robert Gehorsam ’76, New York City; Bernard Jackson ’86, Maynard, Massachusetts; and Eric Mistry ’14, Duluth, Minnesota. Next year’s president-elect is Christopher Meyer ’70, from Sarasota, Florida. 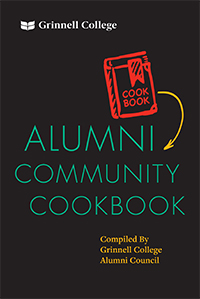 The Alumni Council has published a brand new Grinnell College alumni cookbook, filled with recipes many of you contributed! The last one dates back to 1975. Inspired by President Raynard S. Kington and with significant support from DAR, the council’s committee on engagement and communication organized the new cookbook project. In his preface to the cookbook, Kington observes that sitting down together at a table with good food to share is one of the best ways to create and sustain a community. You can purchase the Alumni Community Cookbook online through the Grinnell College Bookstore (bookstore.grinnell.edu).