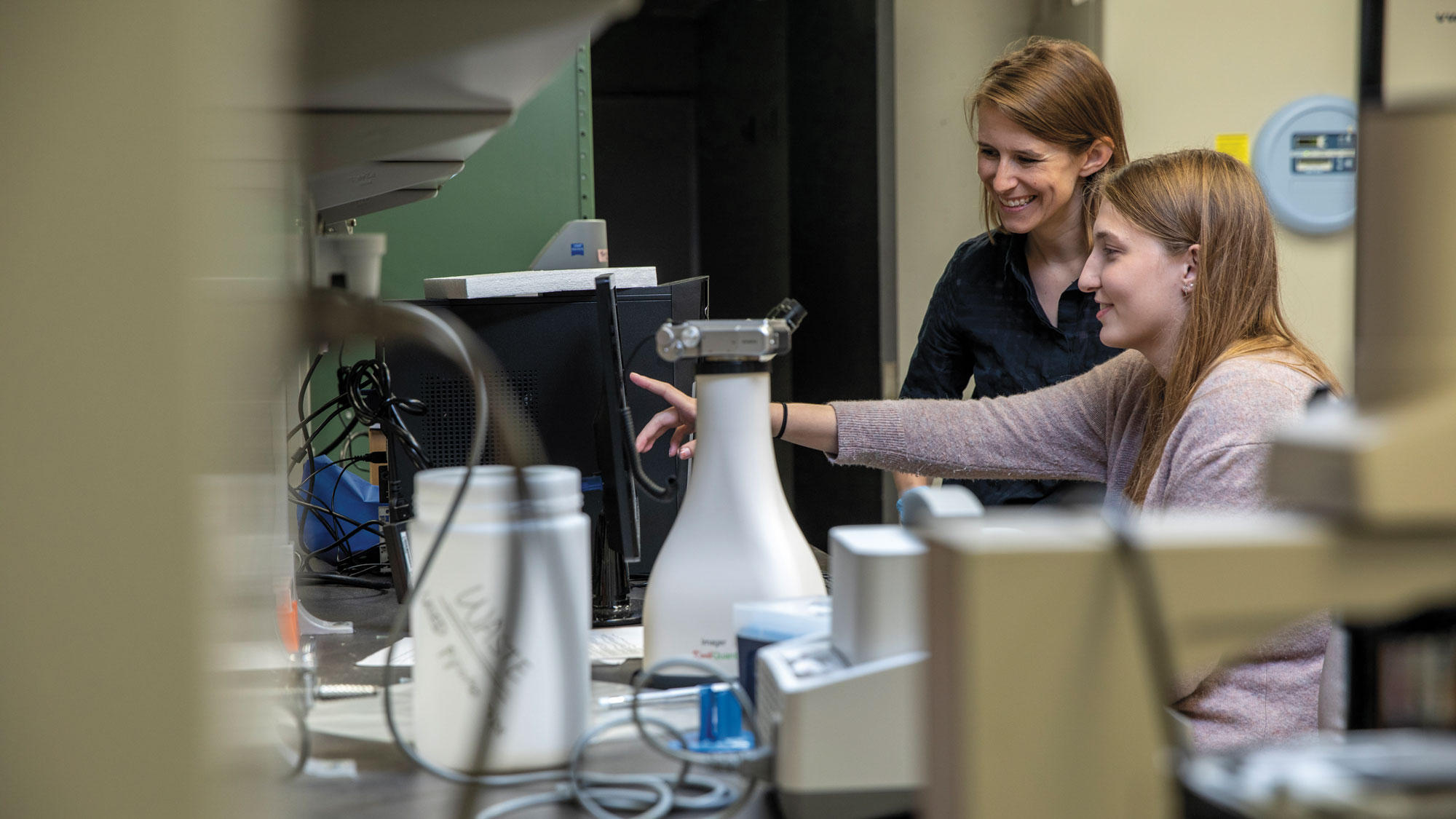 Good Help Is Hard to Find

Why a Cellular Microbiologist Returned to Iowa

Imagine you’ve been working in Paris for several years, but now your job is ending. Where would you go next? And would the state of Iowa be at the top of your list?

In 2017 Lilliana Radoshevich ’04, a biology and French double major, was wrapping up her postdoctoral position at the Pasteur Institute in Paris while looking for a tenure-track faculty job in the United States.

“I saw one at the University of Iowa and I thought, ‘Oh, this is great,’” she says. One reason the job appealed to her? Its proximity to Grinnell and therefore the strong possibility of attracting Grinnell interns.

“I have a friend, Manav Pathania ’05, who started at Cambridge, and he was jealous because I would get Grinnell interns,” Radoshevich adds, smiling. “I immediately thought that I could tempt some Grinnellians to start working in the lab.”

“That 150 course is really a deep dive into how scientists do science. And Grinnell really excels at placing people in graduate school, because the courses are designed that way. So I thought that would be a great way to help out Grinnell and also help out our lab,” Radoshevich says.

As a student at Grinnell, Radoshevich was in the first cohort to take the redesigned Biology 150 course, Introduction to Biological Inquiry, so she knows well the educational experience it provides. She also did a summer internship at the Pasteur Institute where she made the connections that helped her land her postdoc years later.

Shortly after arriving in Iowa City and starting her new job in December 2017, Radoshevich introduced herself by email to Shannon Hinsa-Leasure, associate professor of biology at Grinnell, who was already in touch with one of Radoshevich’s colleagues at Iowa.

“Shannon is really an amazing professor and I want to give her all the credit. One thing that she’s been doing is incorporating visits to the University of Iowa labs and also journal clubs where her class talks, either in person or via Skype, with the lead authors of a paper from the primary literature,” Radoshevich says. Reading primary literature is not unusual in Grinnell courses, but it’s less typical for undergraduates elsewhere. 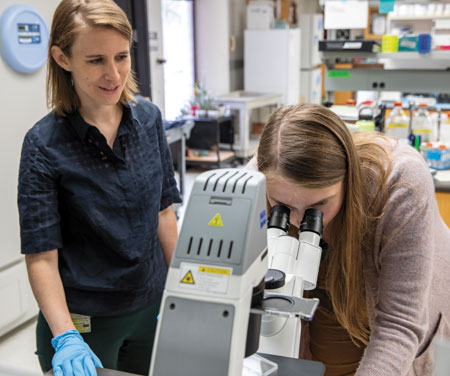 Madeleine Vessely ’20 arrived at Grinnell planning to major in chemistry, but taking BIO 150 with Hinsa- Leasure changed her mind. “The topic was microbial pathogenesis. I took that class and that was it for me,” says Vessely, who decided to double-major in biology and anthropology.

During her second year, Vessely applied to “a bunch of internships.” All of them turned her down. She went to her adviser, Hinsa-Leasure, and asked, “Do you have any ideas of what I could do this summer?” Hinsa-Leasure reached out to Radoshevich, and Vessely soon had a summer internship.

“It was the first time that I worked in a lab outside of class, and I loved it,” Vessely says. Her parents are both medical doctors, so she’s familiar with the clinical side of medicine. Working with Radoshevich exposed her to the research side.

How an Internship Helped Shape a Student’s Career Plan

Radoshevich’s research is focused on a protein called ISG15. “It’s up-regulated or stimulated by interferon, which is one of the main proteins that makes you feel feverish,” she says. She uses Listeria monocytogenes, a food-borne bacterial pathogen that can invade host cells, to understand what this protein is doing generally. “We try to understand the basic and fundamental biology associated with these proteins and that could then be used to treat diseases,” she says.

During Vessely’s summer 2018 internship, she experimented with Listeria in liver cells. “We were looking at it just for fun,” Vessely says. In the process she made a discovery. “We didn’t expect anything different. And then we saw a different phenotype in these liver cells compared to a different kind of cell.” She found that in liver cells the protein gets upregulated when the cells are starving — cells can starve just like humans can.

Vessely followed up on her 2018 findings the following summer, interning with Radoshevich again. She conducted experiments and repeated them to try to get reproducible results.

“That’s one thing that many students have to learn,” Radoshevich says. “It’s not like a canned lab class where your experiments would all work. You actually have to troubleshoot. Changing variables and getting something to work is a big part of graduate school. I think a lot of people start in this area because they want to help human health, but getting something from bench to clinic can take 30 years.”

Which means many experiments that don’t return the hoped-for results. “It’s definitely hard at first,” Vessely says. “It’s like, ‘Oh, I’m doing something wrong.’ But sometimes you just have to get good at it, at failing.”

One reason Vessely did a second internship with Radoshevich is because she likes the self-directed nature of the work. “If you have a question that you want answered, you can go about finding it yourself. But it’s also about collaborating with other people,” she
says.

As a result of her 2018 internship, Vessely’s interest in public health research has deepened. In spring 2019 she did a Mentored Advanced Project (MAP) with Hinsa-Leasure, researching antibiotic resistance. She intends to apply for post-baccalaureate positions to see
if she wants to pursue a doctoral program in the future.

“I feel like she’s a perfect Ph.D. student,” Radoshevich says of her first intern. “But she’ll do
whatever she wants. She has a very bright future.”

One can imagine Radoshevich’s internship supervisor saying that about her once upon a time too.