Daria Guzzo ’19 plays center for the Grinnell women’s basketball team. She is among the one-third of Grinnell’s student body that participates in varsity athletics. For service-oriented students like her, it can be a challenge to fit volunteerism into a jam-packed schedule that includes intercollegiate competition and weekend travel.

By heading up Student Athletes Leading Social Change (SALSC), Guzzo is helping ensure that student-athletes have access to quality opportunities for community involvement. She is building participation and continuity into SALSC, which was started three years ago by Grinnell athletes Ariel Keller ’17 (basketball) and Dana Sherry ’16 (swimming).

“They wanted to provide a way for athletes to stay involved and give back to the community by working around their schedules,” Guzzo says. “There are a lot of great organizations at Grinnell for volunteering, but a lot of them either conflict with practice hours or involve heavy commitment times, which is a little bit harder for athletes.”

SALSC’s mission is “to catalyze and connect college student-athletes to use their passion and platform to inspire and transform communities through sports, education, and leadership.” A few other colleges and universities — such as Illinois College, North Carolina, and Lehigh — have SALSC groups as well. “We gave [the mission] some Grinnell tweaks, because each college town is different and has different needs,” Guzzo says.

“We have a really great committee of 20-plus members who come continuously,” Guzzo says. “It’s always understood that if you’re an in-season athlete you’re a lot busier, and so some will participate more in the spring or the fall. That is totally fine with us because we understand their schedules. We just try to stay involved.”

Focusing on what matters 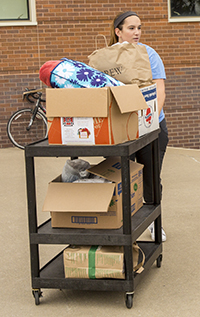 Having limited time means organizational efficiency is essential. The group meets twice a month, with a chairperson named to each of SALSC’s annual major projects. Emily Jordan ’19 is campaign chair for SALSC’s human trafficking campaign, and Carson Dunn ’18 took charge of the sexual assault awareness work. An expanded annual community field day for Grinnell area youth is being planned for spring 2018 by chair Noah Jacobson ’20.

In setting its priorities for the year, SALSC partners with the Student-Athlete Advisory Committee (SAAC), Student-Athlete Mentors, and Grinnell Advocates, among others. Guzzo surveys SALSC membership at the start of the year to measure interest in various topics. “We see what’s feasible, what’s relevant to our campus and our community,” she says.

“I want to do things people are passionate about because people get involved and stay caring when the topics come from something that matters to them,” Guzzo says.

SALSC relies on effective planning for its major events, but it is also agile enough to respond to emergencies. When Hurricane Harvey ravaged Texas and Louisiana in August, SALSC quickly organized a drive to help victims of the storm.

“That actually came about through Ariel, who emailed me and said this would be great for SALSC to do,” Guzzo says. “Everybody was really on board, and we had a ton of support from the athletic department.”

Student-athletes went to work collecting cash donations, gently worn shoes and clothing, cleaning supplies, and other nonperishables at football and soccer games during Family Weekend. Their efforts netted more than $500 and “five or six big boxes” of donations. Guzzo says the Student Government Association helped SALSC with shipping costs, and the donations were sent to Catholic Charities in Houston in October. The monetary funds were donated to victims of Hurricanes Irma and Maria.

“I was really happy with the donations we received,” Guzzo says. “That so many other areas were touched by hurricanes made it even more important that we did it, and I think people realize the impact. Our small contribution in the grand scheme of things is only so big, but if you think about other people doing similar things all over the country, hopefully it helps.”

Guzzo likes the concept of SALSC because “it’s an opportunity for all athletes to be a leader.” She explains, “In athletics, captains are always upperclassmen who’ve shown certain leadership traits that apply to certain things. SAAC and the Student-Athlete Mentors are great, too, and we need those, but SALSC is a way for people to develop their leadership, give back, and have a different role if they want. It’s open to everyone.”

A political science and Spanish major, Guzzo says her personal sense of volunteerism comes from her parents’ commitment to community service and her high school’s emphasis on volunteer work.

“Volunteering matters a lot. People help me out, I should help others out. It’s just part of being a community,” Guzzo says. “I grew up in a town that’s a little bit bigger than Grinnell (Coal Valley, Ill.), but you can see the effects it has in a small town especially. It gives you a lot personally, but it also helps people along the way.