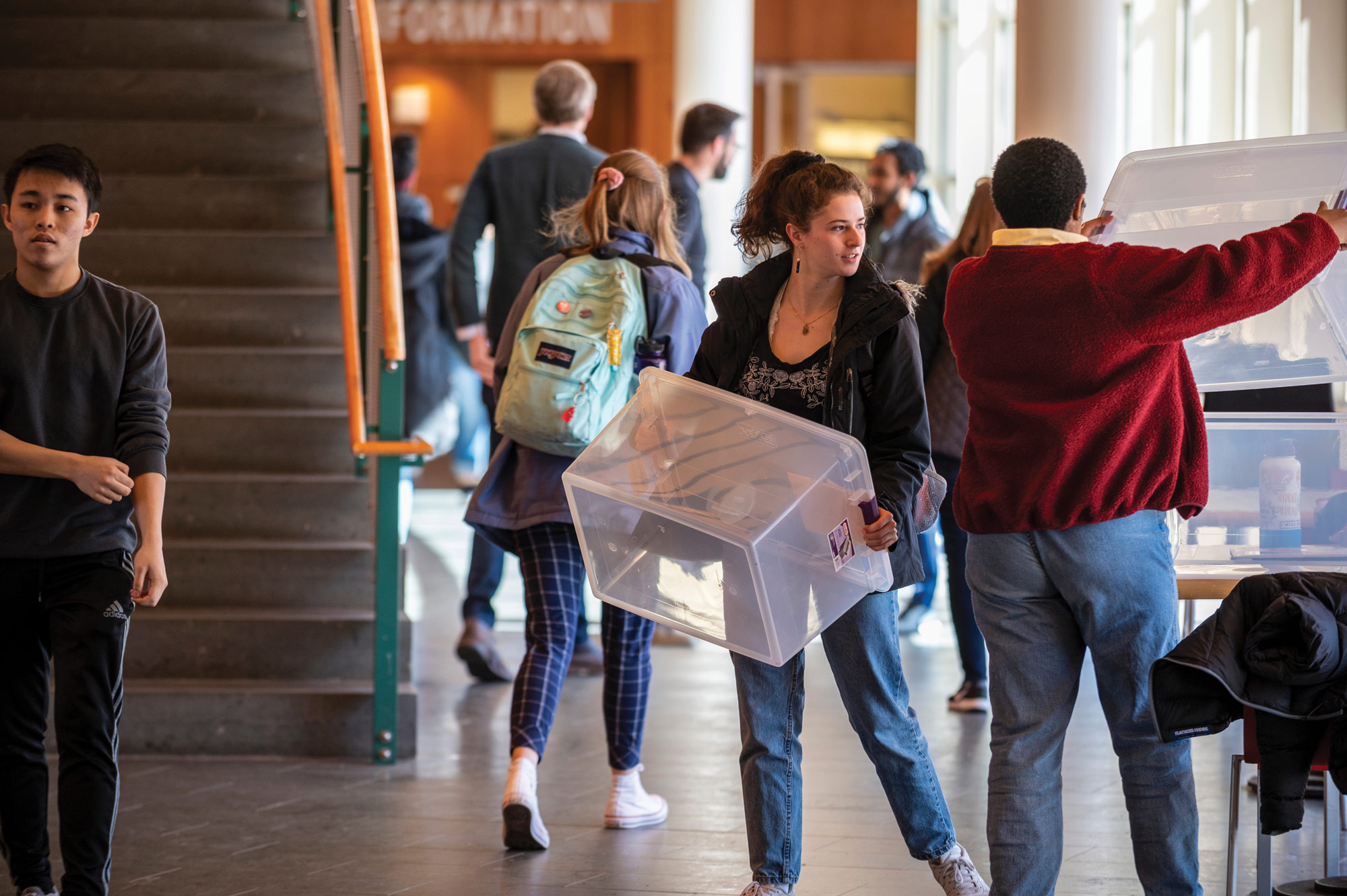 They knew there would be pushback.

When Grinnell College announced on March 10 that it would require students to leave campus, transition to distance learning after spring break, and cancel all events through the end of the spring semester, it was the first Iowa college to take those steps.

“We had been working on coronavirus responses for some time, and we understood very early on what the threat was to the Grinnell community,” says Sarah Moschenross, associate vice president of student affairs. “We had three guiding principles: Protect the health and safety of our students, provide for academic continuity toward graduation, and protect the most vulnerable in our community. We knew we would face pushback in all kinds of ways. But knowing these principles and the College’s mission of social responsibility fortified us when the pushback came.”

Those early decisions by College leaders have gone a long way to mitigating the spread of the COVID-19 virus in Grinnell. But how did the plan actually become reality? How did more than 1,400 students from all over the world return home safely while students who couldn’t go home were set up with social distancing measures?

Student affairs leaders frequently referred to this action as moving mountains, and the list of what and whom it took to move those mountains was about as tall as a mountain itself.

“I have never seen a whole institution mobilize for our students like Grinnell just did,” says Maure Smith- Benanti, dean for diversity, equity, and inclusion. “We’re so lucky to work here.”

Well before the pandemic officially became a pandemic, Grinnell College was holding meetings about it.

Knowing Grinnell’s local medical facilities had limited capacity, a planning group led by Anne Harris, dean of the College and vice president for academic affairs; Angela Voos, vice president for strategic planning and chief of staff; and Heather Cox, associate director of emergency management, started meeting weekly in January and then with increasing frequency to map out plans and contingencies.

“When you are in the emergency, you are executing,” says Moschenross. “By starting in January, it allowed us to center ourselves in our mission and then execute it in action mode.”

Smith-Benanti says it was clear when the College went into emergency mode. “There was one day where I was getting so much communication at the same time that I couldn’t put down my phone long enough to get my shirt on my head.”

“I can’t possibly explain how intense it was for student affairs,” adds Jaci Thiede, vice president of development and alumni relations. “They didn’t have the time to think; they just had to execute. Those early meetings made all the difference.”

The other crucial aspect to executing the plan was getting help from everyone across the College and beyond. Within student affairs, every staff member rose to the challenge.

“Our staff would identify a need and then take care of it,” Moschenross says. 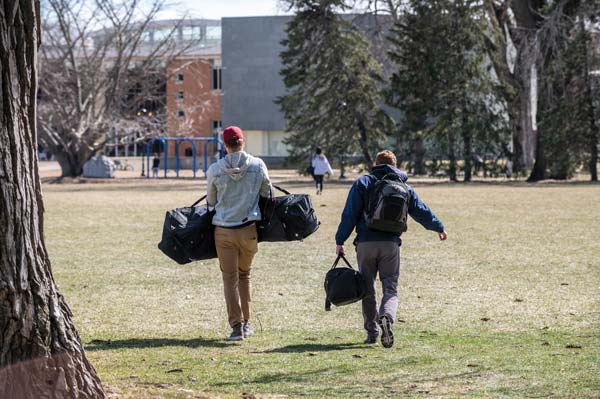 Campus partners assisted in countless ways. Since the Division of Student Affairs didn’t have a designated social media manager, professionals within student affairs, the Office of Diversity and Inclusion, and the Center for Careers, Life, and Service pitched in to post information.

“Susan Sanning, associate dean and director of service and social innovation, and Erik Sanning ’89, technical director in the theatre department, drove their horse trailer into Des Moines to purchase totes so students could pack,” Newhouse adds. “That was something that was critically needed, but none of us had the time for it. That’s one of many examples of how people showed up in really powerful ways.”

Originally students had until March 23 to depart, but the College ultimately moved up the timeline by a week.

“That decision weighed on me for many days,” Moschenross says. “I saw the window for travel closing for some students. There was a real chance that students wouldn’t make it home to their families and that they would be here — where we knew they couldn’t access medical care in the same way they could in other places.”

“Students were looking at their phones all at once.”

Saketan Anand ’21 shares what it felt like to be on Grinnell’s campus when everything changed. Anand, a double major in Spanish and economics from Mumbai, India, is the Student Government Association’s vice president of student affairs.

I was in the dining hall with my close friend and president-elect of SGA Lana Katai ’21 when we received the email about classes moving online and students moving out.

It was crazy. Students were looking at their phones all at once, and their expressions were changing rapidly. It felt like watching a movie in slow motion. I ended up leaving and reading the email in my room, because I felt like everyone was already panicking and asking so many questions. It was overwhelming. As an international student, I had hoped that the College would allow me to stay, which allowed me to focus on helping others, advocate for students and say goodbyes way earlier than anyone really wanted to.

I am still in Grinnell, in the same room where I received the news. I have a single dorm room on East Campus. Since the news came out, the students who stayed have been shuffled around campus and been assigned individual bathrooms with no more than two students on a given floor. Meals are delivered to us at scheduled times on tables placed outside our dorms. We have access only to buildings within our cluster. Academic buildings are shut. Businesses and restaurants in town are shut. It feels like a ghost town, especially at night.

A lot is difficult right now, but it’s been important to me to remember that this is an effort that is successful only if everyone takes it as seriously as the next person. I’m glad the global community is taking this seriously. I have been reflecting on the varying levels of privilege we have as individuals and as a generation as interconnected as we are now, with the internet and Zoom and Skype and Facebook and Instagram and YouTube.

We’re all in this together, and that’s how we’ll get through it.

Another powerful asset in formulating a response to the unprecedented situation was having a medical doctor and public health researcher as the College’s president. Before becoming Grinnell’s president in 2010, Raynard S. Kington was principal deputy director of the National Institutes of Health (NIH). He also held several other roles within the NIH and was at one point a division director at the Centers for Disease Control and Prevention (CDC).

“Dr. Kington has tremendous leadership with large-scale crisis management and decision making,” Voos says. “He’s a creative problem-solver, reads widely, and has a wide range of knowledge. All of those factors contributed mightily to our response to the pandemic.”

David Maxwell ’66, chair of the Grinnell College Board of Trustees, echoed that appreciation in an April 6 campus message.

“Since the outbreak of the COVID-19 pandemic, [Kington’s] background as a medical doctor and a public health researcher has been invaluable in shaping our actions from the early days of this crisis,” he wrote.

Likewise, the leadership from Harris, Cox, and Voos was crucial in steering the College through troubled waters.

“Anne is a big thinker and a community builder,” Voos says. “Heather is incredibly organized and experienced at crisis management. We hired her to raise our level of preparedness for incidents, and she came here in the nick of time.”

Thiede says Voos is a problem-solver by nature.

“Angela works hard to see obstacles that could get in the way of progress and movement, and then does a superb job of removing those obstacles,” she says.

The accelerated timeline meant plane tickets and rental cars had to be reserved immediately. Past gifts to the College and the new Supporting Our Students Fund were instrumental in making it happen.

“I don’t know if all of this would have been possible without the generosity of alumni and donors who have given back,” Newhouse says. “That enabled us to do the right thing and give students emergency help to travel.”

While it was hard to demonstrate it during crisis mode, student affairs staff sympathized with students who were dealing with such an abrupt end to their time in Grinnell, especially members of the class of 2020, who lost their final weeks at college.

“We saw students helping each other,” Moschenross says. “We saw students celebrate in the ways that they could. There was real grief, and we shared in their grief, but we were so busy with emergency operations that we couldn’t take the time to grieve with them in the way that we wanted to. I think students have been adaptable. Because our students are already tuned into social justice and social responsibility, they came to understand really quickly what their role is to protect each other and the vulnerable members of the community.”

Smith-Benanti half-jokingly says that she doesn’t want to go through any emergency again without Moschenross and Newhouse.

“They would lay down their own health and safety to support our students, and so would I,” she says. “We tried to do everything we could, pushing ourselves past our physical and emotional abilities to do the right thing for our students. We believe in them. We love them.”

Grinnell’s response to COVID-19 is rapidly evolving. See more about the College’s current response for alumni and the campus community.