Thank you for Kevin Cannon [’02]’s fold-out spread showing the campus in 1967 and today. It was informative and whimsical.

The train engine in the 1967 view is an amusing anachronism. It is an “American” model, which were in use from about 1850–1900, and could well have run on those tracks. But any model steam engine running in 1967 would have been a recreation, not a daily occurrence. In the 15 years or so after World War II, U.S. railroads retired virtually their entire fleets of steam engines, replacing them with more efficient diesels.

While diesel locomotives have, in my opinion, no charm, they allow rail to move a ton of freight more than 400 miles on a gallon of fuel. Perhaps we will see the day (led by Tesla’s current efforts?) when semi trucks will have the efficiency (and safety) rail freight has provided for over 50 years.

It was a special treat to “study” the 1967/2017 Grinnell College map! How do you avoid getting lost in the new HSSC? I assume that this new facility will replace the old “heart” of Grinnell, the ARH? I think it’s smart to keep the M&StL tracks as they are, assuming that they are still in place. Certainly, a key landmark for letting you know where you are versus where you should be. There was a side-track beside the old heating plaw occasion would provide “sport” for male students to “reposition” a tank car waiting there.

Again, congratulations on your 50 years presentation of Grinnell!

I loved the magazine insert with the map of the campus. I was only at Grinnell for two years, leaving in 1967, and haven’t been back since, so this is really appreciated. Kudos to the staff for producing this for us.

Taking umbrage with [“Q&A with the Fossil Fuels and Climate Impact Task Force,” Winter 2017, Page 4], which obviously was predetermined as to its outcome.

“This has been a completely open, inclusive, and transparent process.” How so?

WHERE are the excerpts from the “open, inclusive, and transparent” discussions?

Exactly HOW has this been open and transparent when the PURPOSE of the “process” has been to discuss how to divest Grinnell of investment in energy companies that sustained it for over a century?

If I had submitted this article to my Modern Philosophy professor in 1970, I’d have been graded a 2- (D+) or an F for the effort.

Editor’s note: As mentioned in the original article, more information on this issue — including recordings of a series of dialogue sessions in the fall of 2017 — is available through the task force website.

The article in the Spring 2017 Grinnell Magazine, “Studying Arabic for Fun” [Page 32], took me back to my four years of taking classical Greek “for fun” with [Bill] McKibben. (It’s hard to know how you could take classical Greek for anything but fun.)

In the third year, studying Plato, McKibben found out I was also taking German. He gave me an assignment: read a German philosopher’s take on Plato and present it to the class. I didn’t really have enough German to understand the philosopher. Comparing his work with Plato seemed insurmountable.

I wandered the library looking for higher-level German students or philosophers or both. When I presented my findings to the class, they exploded with outrage and/or puzzlement and argued among themselves about the topic.

Afterwards I went to visit McKibben to apologize for my failure. He looked at me for some minutes and then said, “It’s good to have something impossible to do once in a while.” Plato’s philosophy passed by me, but those words have come to mind a number of times in my life. Thank you, Grinnell, for continuing to hire teachers who have a great sense of humanity.

I read with interest the feature “Chemistry in Copenhagen” in the Fall 2017 edition [Page 33], but was disappointed that the article dismissed bidets as a “silly topic.” When my wife returned from a trip to Japan two years ago extolling the virtues of the bidet, we quickly bought one (on Amazon!) and it has become one of our favored appliances.

The bidet is often a source of discussion at parties, but it has also contributed to improved hygiene and a reduction in toilet paper consumption. Several friends and family members have purchased bidets after visiting our house!

I recommend Grinnell College purchase bidets for all of their toilets for sustainability reasons: you will be amazed in the reduction in toilet paper, at a cost of slightly increased water use! Your students will thank you too.

I was saddened to learn of the death of Michael Cavanagh in August 2017. The English department at Grinnell holds a special place in my heart as an English major and 1974 graduate — Michael Cavanagh, Edward Moore, James Kissane ’52, Peter Connelly, among others at the time.

I am grateful to Grinnell for the education that I received, for the opportunities afforded me, and for the socially and politically charged debates to be had and lessons to be learned. The times were tumultuous, but I have fond memories of studying Joyce, Woolf, Auden, Yeats, Keats, Shelley, Milton, and Shakespeare in hallowed halls.

I still have my notebook on modern British literature from Cavanagh’s class. And evidently through the years, more offerings followed: A Joycean walk through Dublin, poetry-writing classes, a book on Seamus Heaney. Ar dheis Dé go raibh a anam. Thank you.

When reading “When Work Doesn’t Work as Well as It Could or Should” [Fall, Page 26], I was struck by how redundant much of the material was.

We’ve all heard, or at least should have heard, of “issues” with workplace layouts. Should we have cubicles? Should we have open layouts to inspire creativity/decrease overhead costs?

Regardless of the outcome, this is a tired conversation. If Grinnell wants to inspire its current populace (and disinterested alumni) to do more and better, churning out another tired article that replicates masses of tired articles is not the way to do it.

As for the topics within this article, “Is it time to toss the organizational chart?” and “What to ask before you take that new job,” better advice would be to have a Grinnell graduate to find a job with a company that will appreciate their knowledge and input. My honest advice would be, if you’re working for a company that would fire you for “pushing yourself hard and taking risks,” it sounds like you work for an outdated organization that’s about to fail anyway. Why waste your time and talents on a company that won’t be around long enough to appreciate them?

If you’re going to write about a subject, please invest some time into it. You have a whole breadth of resources from alums who I’m sure can actually share some insight into the markets into which your current students will soon transition. 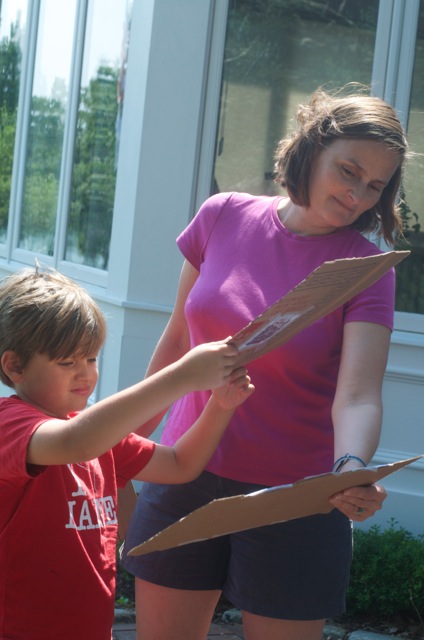 After seeing the “That’s So Grinnellian” photo of the eclipse viewing in the Fall 2017 issue of The Grinnell Magazine, I thought I’d share how this Grinnellian and her family viewed the eclipse: homemade pinhole viewers and no viewer at all (thanks, Kartik Sheth ’93, for the interlaced fingers tip). Photos were taken in Boothbay, Maine of Storck with her nephew Harry.

I loved reading the article “Portrait of a Teacher: George Drake ’56” [Page 20, Summer 2017]. I formed a special relationship with George. To this day, I believe in the phrase “everything happens for a reason” in large part due to our meeting. The year George took over as College president, 1979, I was elected SGA [Student Government Association] president. I ran on a unique campaign proclaiming myself “not just president for the next year, but messiah for the coming millennium.” The campaign was printed in papers nationally by UPI and caused quite an uproar among conservative ministers and others. (I wonder how much worse it would have been with the Internet.) It seems they didn’t have my sense of humor.

I had no idea what to expect from a man who went to seminary. And I had heard from other SGAers that the previous president, A. Richard Turner, was very serious about how SGA was run, although I had no interaction with him. Was I going to find the same sentiments with George?

Of course, George couldn’t have been more opposite those concerns: He was very open-minded with a profound sense of humor. I remember initially and nervously addressing him as “President Drake” and he responded — with that great smile and a handshake — “SGA President Kramer.” We laughed, I learned to call him George, and from that moment on I felt comfortable around him. I would meet with George regularly to update him on student happenings. He never judged or interrupted. He was engaged and interested in everything I discussed with him, as was I with his suggestions. We worked together to make student life a little bit more interesting that year.

In those days, we had a Skip Day, announced by the SGA president on KDIC. Some of the professors, especially in the sciences, were against this inconvenient nonacademic intrusion and scheduled tests for that morning. George was very supportive, feeling Skip Day was an important part of student life. He always seemed to be on the students’ side. In retrospect, this was one of the best years of my life in no small measure due to George’s enthusiasm for Grinnell.

It is so nice to read George is still actively teaching and engaging students with humor and open-mindedness. I hope to hear he is still doing so into his 100s!