As the tail end of the post-World- War-II generation, I boosted the United Nations as a forum for identifying and solving issues of peace, war, and humane development. At Grinnell I led the International Relations Club supported by Professor Phil Thomas (who identified himself as an underdeveloped unbalanced economist). For three years running, I attended the New York City annual meetings of the Collegiate Council for the U.N. and was elected National CCUN vice president. This year, 2019, I am teaching a course, The U.N. and Global Order, at North Carolina State University. 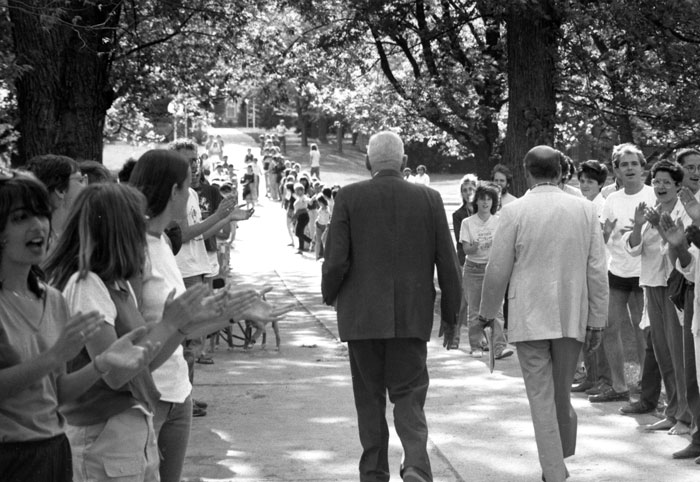 After the 1976 Soweto student uprising, I came to Grinnell in 1977 determined that the school divest from companies operating in South Africa. Our group wrote articles, protested, and eventually negotiated with the trustee chosen to speak with us, the young tech guru Steve Jobs. We were part of a national movement working for divestment. This year, I had a chance to visit Soweto and met Antoinette Sithole, the sister of the first student killed, Hector Pieterson. She said the Soweto students took strength in knowing that American students were organizing alongside them. We thanked one another for helping end apartheid.

Chicken or the egg

When I was a student at Grinnell, I did an independent research project with Chuck Sullivan in the biology department during the summers after my sophomore and junior years. We were investigating eye development in chicken embryos. I still fondly remember the comradery among the students doing summer research projects at Grinnell, and I fondly remember the opportunities to present my research at undergraduate symposia in St. Louis and Chicago. For me, this experience changed the trajectory of my career as I shifted from a pre-med focus to a research-focused career. I went on to earn a Ph.D. in developmental biology from Stanford University, and I continued my research career as a postdoctoral fellow at the University of California, San Francisco. I am now on the faculty at the University of Wisconsin-Madison, where my laboratory investigates prostate cancer and other prostatic diseases.

People fascinate me. Two research projects at Grinnell taught me the value of studying people in aggregate and as individuals. For a sociology project, I used statistical analysis to study a group’s connections and what the members thought the connections were. I learned the nodding acquaintance between reality and perception, how they can influence each other, and the importance of questioning your data. Researching an ethnography taught me how much you can learn from actively listening to people who see the world very differently. Those lessons have served me well, helping me develop a web content management system years before they were common; create an annual research and arts event that, more than 25 years later, is still going strong; and make friends across political, social, and cultural divides.

As a senior, I designed an anthropology thesis research project that included surveying and interviewing senior and first-year women to determine how, why, and to what extent they achieved their educational and personal goals. I was proud of the 40-page paper I produced at the end of the project! The critiques I received from my adviser and thesis committee, however, make me cringe to this day. They provided negative and well-deserved comments about not only the many typos, grammatical mistakes, and page-break errors in the paper, but also about the premise of the project, the methods I chose, and my analysis and conclusions. I’m not sure I read all of the comments in one sitting, as they were so difficult to internalize. Not only was my senior research project a practical learning experience, but so was accepting criticism as valuable feedback for improvement. My Grinnell research project still serves as a humbling reminder to carefully consider my choices of approaches and personal biases in the research I do today.

I was a sociology major, and I found that none of my classes discussed the African diaspora in the Americas outside of the United States. Luckily, Burling had a fairly extensive black history library. There I was able to learn about blacks in Brazil and other Latin American countries. I learned about the difference in the slave trade and how racism and colorism were intertwined with classism. Each Latin American country was a little different. I also learned about blacks living in Canada, who had fled there to escape slavery but still faced racial discrimination. This was never an official research project, but skipping class to read books that I was actually interested in was a highlight of my Grinnell experience as a black student in the 1980s.

In 1960 my classmate (no names, please!) and I became publishers of the notorious Grinnellian Rebellion. We started this underground newsletter as a humorous alternative to the Scarlet & Blah, the official voice of the student corpus. It was written on a manual typewriter and then mimeographed surreptitiously in Goodnow Hall. Paper cost a lot of money for us impoverished juniors. Fortunately, friends would kick in a ream or two of paper.

The mailroom supervisor, who was indifferent, senile, or had a sense of humor, stuffed each issue into students’ mailboxes. Then we’d stand outside to see who snorted and threw our magnum opus in the trash or laughed uproariously at the parody. Happily, none of us were caught and expelled. He went on to be a direct-mail writer and I a corporate communications director.

You can imagine our delight when we won the state championship in 1968, surely fueled by spirit and grit more than talent. On our way home, we stopped for dinner and carried our 3-foot-tall trophy crowned by its hockey player into the restaurant with us to keep it safe. The hostess looked at our prize and said, “I see you girls won a golf tournament!”

I vividly remember auditioning for the musical Stop the World, I Want to Get Off during the 1968–69 season. Merritt Olsen ’68 was cast as the lead, Littlechap, and I was cast as Ginne, an American cabaret singer, one of his conquests. I recall how intense rehearsals were but how easy Merritt made it seem. His acting was so natural and he was so professional that he immediately put all the cast at ease.

In one scene, Littlechap and I had a flirtatious moment onstage after I sang a song and sat in his lap. It was so much fun to trade lines with him and see how the audience appreciated his performance as much as I did. Although this was my first acting role, taking part in the theatre at Grinnell and working with such a talented actor and the rest of the cast was a thrilling experience for me.

Freshman year I was a member of Cleveland Hall’s after-dinner basketball team. I think we were playing Loose Hall, and with 20 seconds left, we were behind by a point. We stole the ball and called a time-out.

I remember saying, “Don’t give me the ball,” as I knew I wasn’t the one to trust! But with seconds left, and me standing in the corner to not be anywhere near the action, Dave Rosenwasser ’73 tossed me the ball.

As I heard the ref count down from five, I threw the ball with all my might towards the basket, and to my shock it swished through; we won by a point.

I even called my parents after the game to let them know of my “heroics” of that evening. I still remember the ecstasy I felt years later!

From Aikido to Zumba and varsity to intramurals, Grinnell students participate in a multitude of activities for fitness, competition, and fun. Is there a sport or wellness activity you participated in at Grinnell that you still do today? What impact has it had on your life? Submit up to 150 words by Jan. 1, 2022, to magazine[at]grinnell[dot]edu with “Prompted” in the subject line.