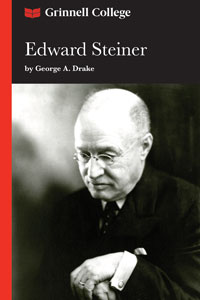 Edward Steiner was Rand Professor of Applied Christianity at Grinnell for 38 years in the early 20th century. He was perhaps the most published faculty member in College history, publishing more than 20 books and 50 articles during his career. In this chapbook, George Drake recounts Steiner’s life as an immigrant from Slovakia, the hardships he experienced until he mastered the English language, and his adherence to ideals of the Social Gospel and Applied Christianity. He crossed the Atlantic at least 12 times, always in steerage, while interviewing immigrants. His friendship with Leo Tolstoy influenced him profoundly. And, in turn, he influenced Grinnell’s five New Deal administrators, including Harry Hopkins 1912.