A Student Commentary on Plato’s Euthyphro 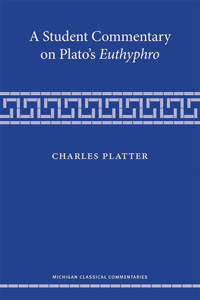 A Student Commentary on Plato’s Euthyphro, a new book by Charles Platter ’81, was published by the University of Michigan Press. The Euthyphro is important for understanding Plato’s presentation of the last days of Socrates, dramatized in four brief dialogues: Euthyphro, Apology, Crito, and Phaedo. In addition to narrating this evocative series of events in the life of Plato’s philosophical hero, the texts can be read as reflecting on how a wise man faces death.