This Thing of Darkness 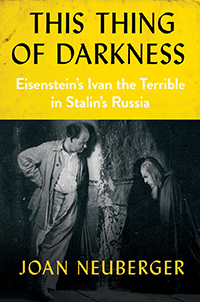 Sergei Eisenstein’s unfinished masterpiece, Ivan the Terrible, was no ordinary movie. Commissioned by Joseph Stalin in 1941 to justify state terror in the 16th and 20th centuries, the film’s politics, style, and epic scope aroused controversy even before it was released. In This Thing of Darkness: Eisenstein’s Ivan the Terrible in Stalin’s Russia (Cornell University Press, 2019), Joan Neuberger ’75 offers a sweeping account of the conception, making, and reception of Ivan the Terrible that weaves together Eisenstein's expansive thinking and experimental practice with a groundbreaking new view of artistic production under Stalin. Neuberger is a professor of history at the University of Texas at Austin.