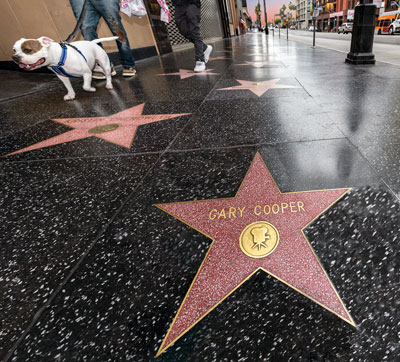 Yes, Gary Cooper ’26 is a Grinnell College alumnus. He earned the coveted pink and brass star on Hollywood’s Walk of Fame for his five Academy Award nominations, including best actor for High Noon and Sergeant York. Born in Montana, he transferred from Wesleyan College in Helena to Grinnell in 1922. There’s a legend he was rejected by Grinnell’s drama club for stage fright and stuttering. Erin Peterson ’98 did some deep archival research for a Grinnell Magazine article about a decade ago and confirmed this was actually true. She even found evidence that the club snubbed him multiple times. Failure — being the best preparation for success — led him to adopt a laconic, restrained, yet intense persona suited to popular Hollywood westerns.