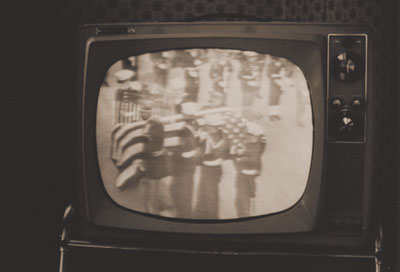 I was playing bridge, which is something I usually did after lunch and before class, in Smith Hall lounge. Someone came into the lounge and said JFK was shot. I don’t remember who turned on the TV and turned on NBC, which was airing a soap. Within seconds, NBC switched to a news special from Dallas. Since our lounge was very near Central Campus, it filled to standing room only within minutes. Except for the news anchor, the [silence] in the Lounge was deafening. Several hours later, I walked to the library because I left some of my books there. The flag [was] at half-staff and the only other living being in Central Campus was Fang, the stray dog.