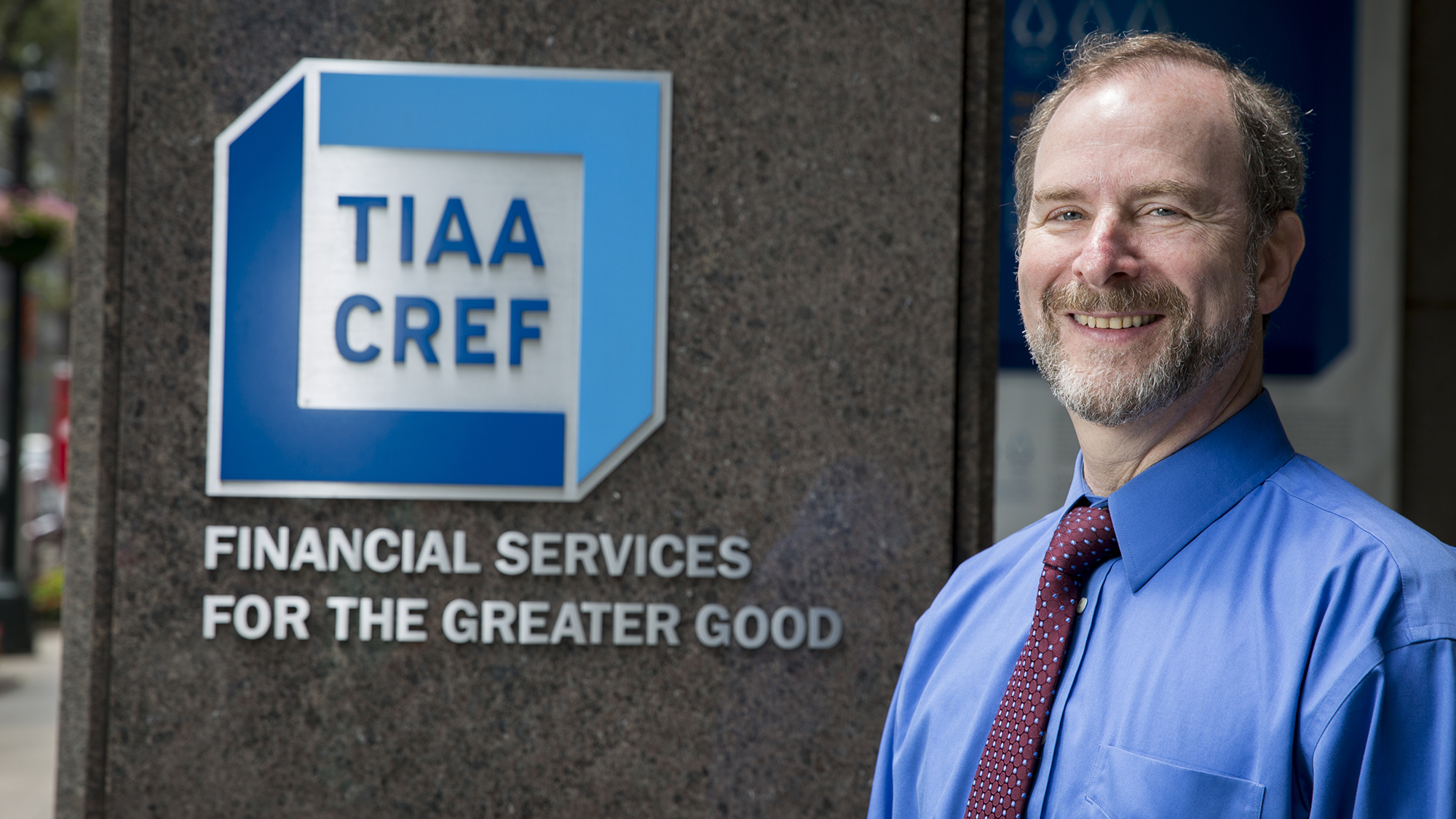 For Grinnell students, summer internships at TIAA-CREF Financial Services are the gold standard for superior learning opportunities. Since 2000, several Grinnell students have been fortunate to be accepted there each year. Not only do students discover an opportunity to develop their skills and career paths in meaningful ways, they find that much about the experience is distinctly Grinnellian.

Michael Kahn ’76 is senior managing director of corporate strategy and development at TIAA-CREF in New York City. He sponsors, mentors, and works closely with the majority of Grinnell interns, whether their student experiences are in midtown Manhattan or at another major TIAA-CREF campus, such as Charlotte, N.C.

“TIAA-CREF is a particularly great environment for Grinnell students,” says Kahn, who was elected to the Grinnell College Board of Trustees in May. “We’re a mission-driven organization. We exist to serve those who serve the greater good, which aligns well with how Grinnellians think about what their role in the world will be.

“We are really good at what we do, whether it’s broad financial services or sophisticated asset management,” Kahn says. “We’re aligned with the interests of all our clients and we produce great outcomes, so TIAA-CREF is a company that has values and capabilities that resonate with Grinnellians.”

Most important for students is that internships offer real substance, and Kahn says TIAA-CREF interns regularly work on assignments that not only are important to the company, but that constitute challenging student learning opportunities.

“Internships at TIAA-CREF typically involve working with senior level staff,” Kahn says. “Students are not buried deep in the organization. They actually get to work with people from whom they can learn a lot and who are really accomplished. I’ve even had students working on launches of new lines of business, which is something that interns would almost never get to do anywhere else.”

David Jutrsa ’15 was a Grinnellink summer intern at TIAA-CREF in 2013. “David worked on a potential major acquisition,” Kahn says. “It was a big deal, and it was complicated. As an intern you’d think you would never get near something that interesting, but he got to work with the core team and was in meetings with our most senior staff.”

Jutrsa recently accepted a research assistant position with the International Monetary Fund. “The TIAA-CREF internship exposed me to the world of business and really solidified my interest in finance,” Jutrsa says. “I would definitely recommend any Grinnellink internship with TIAA-CREF to students looking to break into these fields and connect what they learn in classes to the professional world.”

Natalie Duncombe ’15 also was a Grinnellink intern at TIAA-CREF in 2013. She says building a mentor relationship with Kahn was the most valuable aspect of her internship.

“His advice throughout the summer helped me get the most out of my time at TIAA-CREF, and he continued to help me with recommendation letters, as well as career, résumé, and interview advice,” Duncombe says. “Without him and my time at TIAA-CREF, I don’t know if I would have been as successful in securing my economic research assistant position at the Federal Reserve Board of Governors in Washington, D.C.”

Megan Goering ’08, who interned at TIAA-CREF in 2006, says, “Interning with Michael defined the role and value of a mentor for me. At the time, I was really opening to discovery and my own personal capacity in a new way, and Michael’s example seeded lessons for me that continue to unfold nine years later.

“The consciousness, creativity, teacher and learner’s spirit, and deep dignity and value Michael has for people shown through his work in a way that continues to light my path,” Goering says. “Michael’s way is soulful, honest, connective, endlessly creative, accountable for human principles, and just. There are good people in finance, and because of Michael’s extension of his work through mentorship, perhaps there will continue to be more.”

Dolan Talukdar ’05 was a student intern at TIAA-CREF for two summers, in 2003 and 2004. She says she watched the program evolve into one tailored to develop students’ skills for a job in finance. “Having witnessed the partnership’s initial progression under Michael, I am not surprised to see that it has become a mainstay at Grinnell,”  Talukdar says.

“From day one Michael came across as warm, quietly intelligent, and genuine,” Talukdar says. “His management style convinced me that it was indeed possible to be an empathetic yet successful leader in finance, and I have tried to emulate his approach in my own career.”

Talukdar says she still considers Kahn her “go-to mentor” and tries to renew the connection whenever Kahn’s work brings him to London, where she currently lives and works. “We have wonderful conversations about Grinnell and TIAA-CREF’s consistent collaboration with the school,” she says.

Kahn says he firmly believes that having engaged alumni involved in the internship process makes a big difference in the quality of student work experiences. He typically maintains close contact with students at TIAA-CREF, talking with them about their assignment and helping them think about how the internship can prepare them for a career.

“Having a Grinnell alum as an advocate in an internship situation brings additional value beyond the work assignment itself,” Kahn says. “The College already does so much to prepare students for great things in life, and our internships are an excellent example of how Grinnell extends the community beyond the prairie to places like midtown Manhattan.

“I’m passionate about Grinnell, and I’m passionate about giving back to Grinnell in any way I can,” Kahn says. “One of the best ways I believe I can do that is by being a resource to current students, as well as to younger alumni who may be early in their careers and looking for that type of guidance.”