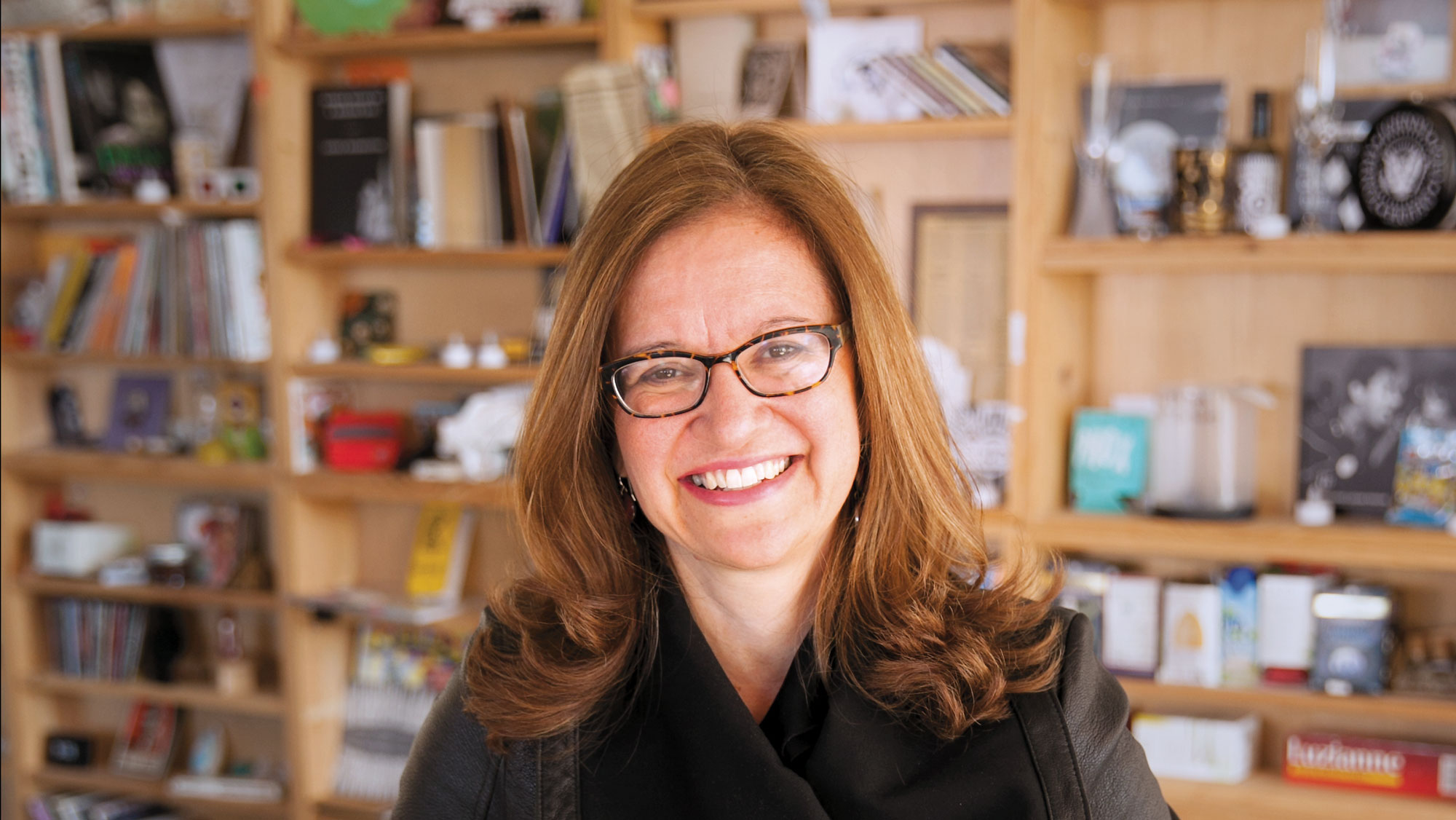 Anya Grundmann ’89 stayed in Grinnell after graduation, taking music classes and working in town as she contemplated her next move. One day she turned the dial on her radio to the local public radio station. Fresh Air was on, and Terry Gross’ soft voice cut through the static, capturing Grundmann’s imagination through smart conversations with fascinating people on topics she had never thought about.

What Grundmann loved about Fresh Air — learning intimately about wide-ranging topics — she also found at Grinnell. Both drove her to a career in public radio and her current job as vice president of programming and audience engagement at National Public Radio.

Grinnell’s individually advised curriculum allowed her to spend as much time on her English major as she did on music — studying piano, singing in the choir and Grinnell Singers, and participating in music ensembles. Grundmann embraced opportunities to learn outside the classroom, including studying biology at a wilderness field station. She also worked as an editor of The Scarlet & Black, a valuable experience for her future career in journalism.

“The whole point is that we’re there to learn and explore,” she says. “I tried to throw myself experientially into the different facets of academic subjects, but also in terms of the extracurricular things … I really appreciated the freedom and flexibility of that.”

How She Found Her Sound

With Terry Gross’ voice still ringing in her ears but without a semblance of a plan, Grundmann set out to Flagstaff, Arizona, in January 1990.

Flagstaff’s public radio station, KNAU, was housed in the music building where Grundmann started taking classes toward a master’s in music.

“I just kept walking by.” She told herself, “one day I’m going to walk right in there.” And she did, offering her services as a volunteer.

As it happened, the news director needed someone to cover a press conference on the Navajo reservation that day. So, armed with a recorder and absolutely no idea what she was doing, Grundmann set out for her first report.

She covered the press conference, returned to the station, and made a short radio spot — her first experience cutting tape and piecing together an audio story. “I thought that was magic.” Grundmann continued to learn the ins and outs of public radio, allured by the creative process of producing audio stories.

When the station needed someone to produce another classical music program, Grundmann jumped at the chance. They put her on air Friday and Saturday nights. “I was not that good, but it was enjoyable.”

At the station, Grundmann was able to channel her lifelong passion for music into her work and develop her skills as a public radio announcer.

From the beginning of her work in public radio, Grundmann focused on “connecting people with great music, the ideas and issues around music, the creative experience of music, that communal connectivity that music brings to us that’s beyond the spoken realm.”

How an Internship Helped Her Learn the Craft

Then, in 1994, she accepted an internship in the cultural programming department at NPR in Washington, D.C. She noticed people complaining about writing certain parts of their shows and volunteered to try her hand. In that way, she honed her skills in pursuit of that coveted NPR sound. She ascended the ranks from intern to associate editor and then supervising editor of the classical music program, Performance Today, before becoming executive producer of the NPR Music unit.

But it all started with an internship. For Grundmann, learning on the job was expected, and it was the best way to learn. “Historically in public radio, internships have really been a great pathway because it gives people a real exposure to the craft.”

Perhaps even more so back in the ’90s when she was learning the craft.

“Back then we were using reel-to-reel tapes and razor blades, and I have scars to prove it. And then in order to mix things that were beautiful and complicated, you had five different reels and you had to sync them up. It was like directing some kind of movie or something.”

Nowadays, digital recorders and audio editing software have enabled quick and accessible learning opportunities for audio production, allowing anyone (including the author of this story) to start a podcast.

A Pioneer in the Digital Realm

As technology evolved, so did Grundmann, pushing for new ways to engage with the audience in the 21st century. As NPR looked to expand into the digital space, Grundmann zeroed in on the opportunities she saw to enhance the music programming. At the time, much of NPR’s music programming was ephemeral, so a website that could aggregate and organize public radio music programming would have been a valuable addition. But Grundmann thought they should do more.

“We’re in a new space where it’s a different experience for people to click on something and engage on the web; and it’s very visual. So just taking the things we were doing on the radio and putting them online felt like a half measure.”

So, with Grundmann at the helm, they came up with ideas for the new digital space, landing on three initiatives as they launched NPR Music: Project Song, a documentary series detailing the journey of a song’s creation; a blog from Carrie Brownstein of Washington indie rock band Sleater-Kinney; and a recommendation list from renowned cellist Yo-Yo Ma.

The overwhelmingly positive response from these new ideas encouraged Grundmann that NPR Music was on the right track with the web-first music programming approach. From that spirit of experimentation also came the incredibly popular Tiny Desk concerts, a series of intimate video performances recorded live at the desk of All Songs Considered host Bob Boilen.

The Ethos of NPR

Changes in the digital landscape have challenged NPR to grow and adapt while still adhering to its mission. As millions of viewers watch Tiny Desk concerts and millions more tune in to NPR’s podcasts, Grundmann’s focus remains fixed on innovation, maintaining the delicate balance of sustaining current listeners while connecting to new audiences across rapidly changing platforms. Part of what has made her so adept, throughout her career but especially now in her leadership role, is what she describes as a “surfer” mentality. NPR is filled with incredible journalists who are experts in their fields, “deep divers,” as she calls them. But just as vital in journalism are “surfers,” people who can learn and explain how complex issues relate and inform each other, a skill found in spades among liberal arts students.

From comedy shows like Wait Wait Don’t Tell Me to the TED Radio Hour and everything in between, NPR’s content helps people understand our crazy world and, at its best, understand each other.

Grundmann believes the first step to understanding is listening better, urging us to “take a breath while we’re listening to people whom we may not agree with. Take a deep breath and then empathize and take a beat and then have a conversation.”

Part of being a good listener, she says, is also about respecting the spaces in between.

“What if you were to walk through a day and think about the spaces in between what people are saying, or the spaces in the music and what the spaces do in terms of making that music really pop and be strong, and the quality of the conversations when you have some space?”

What happens, she says, could surprise you. “People might say some things that they wouldn’t have if you were talking all the time. I think if you practice that in your life, it’s actually interesting what happens.”

So the next time you turn on the radio, or ask your smart speaker to play a podcast, you might still hear Terry Gross’ soft voice, but if you listen closely to the spaces in between, you might be able to hear Anya Grundmann, shaping what America listens to.

Anya Grundmann helps manage NPR’s award-winning lineup of podcasts. If you want more podcasts with a Grinnellian flavor, you'll find brief descriptions and links at All Things Grinnell. Listen to the full interview with Anya Grundmann on season 2, episode 8.