Anybody Can Do It

A brief portrait of an oddball club sport
Michele Regenold ’89

Players tread water as they pass and catch the ball one-handed, swim while pushing the ball in front of them, or power up out of the water to whip the ball through the air to score. 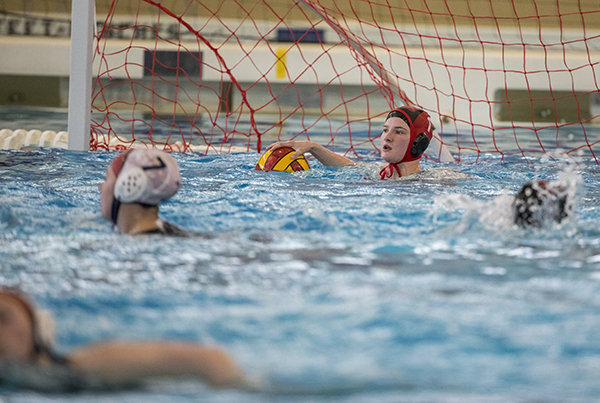 Play is fast-paced and loud, with players hollering at each other — the ear protectors on the helmets make it a little hard to hear. Communication is crucial because it’s hard to see well. Players’ heads are the only things consistently above water.

“Knowing who’s open, who you should pass to, that’s a big thing,” says co-captain Olivia Konieczny ’21, who is also a varsity swimmer.

At a glance, the game can look a little intimidating with 14 people in the pool at once.

“Anybody can do it,” Hall insists.

As a club sport, water polo is open to anyone who wants to participate, which means the players have very different levels of experience with the game. And that makes coaching a lesson in embracing and appreciating differences.

Since club sports don’t have coaches, the team captains do much of the coaching, although players have a say too. It’s all very self-governing.

They must be coaching each other well. During the spring 2018 season, Grinnell finished first in its conference, qualifying for the Women’s National Collegiate Championship for the first time.

Hall says of the 14 players who went to nationals, 11 or 12 had never played water polo before that season, and the team lost just two seniors.

During the student organization fair in August 2018, Hall and Konieczny recruited new players. “I think a lot of people are really eager to try it out,” Konieczny says.

During the upcoming season, which runs from late February to early May, the team will practice three times a week for an hour and a half each. They’ll warm up by swimming a few 50-meter laps.

“We’ll do passing and shooting drills,” Konieczny says. “We practice how to move around, where to go, or random scrimmages.”

Moving around in their set up is akin to running a play in basketball. And similar to basketball, when a team has possession of the ball, it has 30 seconds to try to score.

Konieczny says water polo also teaches how to play under pressure. “When you’re getting pressed by a defender, it’s easy to not know what to do.”

The women’s water polo team plays three other schools in the region — Carleton College and St. Mary’s University in Minnesota and Knox College in Illinois.

“That’s more fun because we get to travel and meet other people,” Hall says.

“Which I love,” Konieczny says.