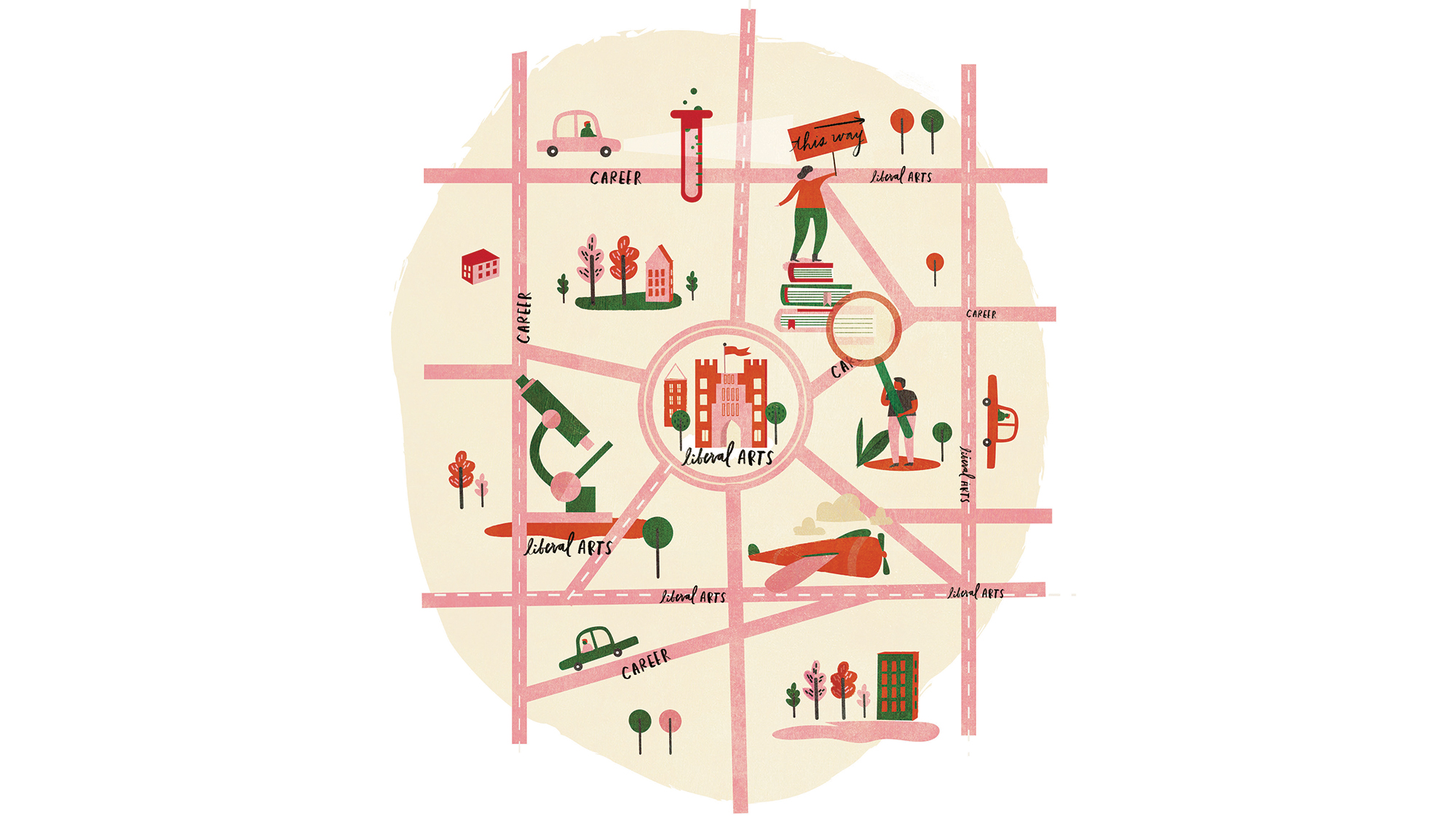 Alumni share their meandering paths to unexpected careers — and how their liberal arts education helped get them there.
Erin Peterson ’98

Grinnellians have long been told that a liberal arts degree prepares them to excel at just about anything. The wide range of careers that Grinnellians have pursued successfully bolsters that argument.

But getting from point A to point B can seem like a mysterious process. What’s the path from anthropology to fighting cybercrime?

In this story, we talked to four Grinnellians whose majors could hardly seem further from the work they do now. They shared their off-the-beaten-path tales and the elements of their Grinnell education that made even their biggest leaps perfectly possible. They also shared the advice they’d give anyone who wants to make a major career pivot.

“It was a big leap into the void.”

Stephen Potter ’80 is a pilot for Delta Air Lines. 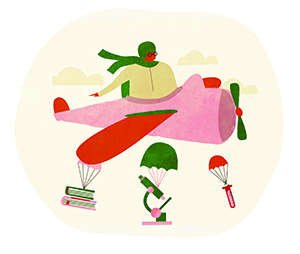 I was an airplane nut as a kid. For some reason, I got it in my head that I was too tall to be a pilot, even though that turned out not to be true. I went to Grinnell thinking I might be pre-med, and I majored in biology. I liked the intellectual life, I liked the campus life. I also really liked that Grinnell inculcated an idea of service.

At some point I decided that medical school was not in my future, so I went home to Boston and got whatever I could get for a job. In 1980, that was not much. I did work in a beautiful high-rise building near a government center, though. I remember seeing an ad for the Air Force that was “Aim High, Air Force.” Then, one day, I was eating my sandwich, looking down from an empty office, and I saw an F-15. There was an Air Force recruiter beside it.

The seed was planted. I knew whoever won the election that year, the military was going to get bigger. I still wanted to be a pilot, and I knew demand for pilots would be high. I aced the initial aviation tests.

Still, it was a big leap into the void. You sign a contract for six years. There’s no guarantee that you will do anything you want to do. In so many ways, the culture was the complete opposite of Grinnell. There were no choices. The workload and lifestyle is so hard on individuals and their families. But at Grinnell, I had learned how to cram a lot of information in my head in a short time. I could work hard.

Learning to fly is a long process. You don’t cook up pilots like pancakes. But eventually I flew the F-4, a Vietnam-era twin-engine, twin-crew fighter. It was cool and fun and fast and loud. It was everything I was looking for.

It’s fun flying fighter jets, but it’s a young man’s sport. You’re pulling G’s. Imagine your head weighs 120 pounds and you’re turning around to look at a jet behind you … trying to kill you. You get back problems. You can pass out. People die doing that stuff. It was thrilling, but demanding. I thought of it as giving back.

I love this work, and Grinnell is something that actually prepared me for it. I knew how to study. I have a humane outlook on life. Being a pilot is about more than just stick and rudder. It’s about interacting with crew, customers, and also representing the company well. It’s about someone who can be a well-rounded individual.

“When you understand people, you unlock the secret to everything.”

Mona Ghadiri ’11 is a senior product manager at Trustware. 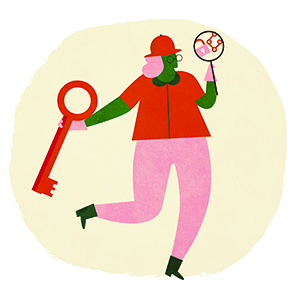 I started as a history major at Grinnell, but one day I was sitting with my roommate and I said, “I really just want to study people. What major is that?” She looked at me and said, “You’re joking, right? That’s anthropology.” I fell in love with it. It was the first A I ever got in college.

Anthropology teaches participant observation. You pay attention to the way people do things, and that’s how you learn the “rules” for groups of people. You find out what’s important to them. I realized that when you understand people, you unlock the secret to everything.

I was interviewed for a story in The Grinnell Magazine about some work I did in anthropology, and the editor put my face on the cover. After I graduated, I ended up working at the magazine.

While I was in Grinnell, a friend connected me with a business owner in Grinnell who was Iranian. I’m half-Iranian, so she thought we should talk. We did. He worked in manufacturing, and he offered me a job as a project engineer. I had no business doing that! But a copy of The Grinnell Magazine was in his office, and my face was on the cover. I said, “That’s me!” I think that helped me get the job.

My new boss gave me a book about injection molding — the process used to make hard plastic parts, like things you might find in your car — and told me to learn it in three weeks. I did. Beyond that, I used what I learned in anthropology: watch, learn, copy.

I eventually went to get an MBA, and applied for a job at the cybersecurity company Forcepoint. When I interviewed, they told me everyone else had software experience, which I didn’t. But sometimes, like in the TV show Chopped, the person with the least experience beats the person with the Michelin star. They’re not afraid to go outside the box, because they don’t know what the box is. Sometimes, the box is a burden.

In cybersecurity, it’s not just about building the strongest lock. It’s about understanding people, so that you can help them be as strong as the lock you might create. This work isn’t just about how you prevent malicious users outside of an organization from getting in, but about preventing the ones inside from doing damage. How do you create a system so someone who gets a bad performance review can’t steal intellectual property? Maybe it’s just making sure that a big change can’t be made unless two people approve. 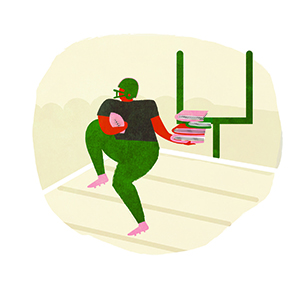 When I got to Grinnell, I thought I’d be a doctor or an engineer. But I’d come from a small, rural high school, and my preparation was nowhere near where it needed to be. I ended up with a psychology major, and I had to bust my ass just to get out of Grinnell with a degree and a decent GPA.

I played football and baseball at Grinnell. I had toyed with the idea of coaching. So while I was in the graduate program at Western Washington, I sat in on an undergrad football theory class that was taught by the head football coach. It was a bunch of football players and [first-year] students. Here I was, a Grinnell grad in graduate school. But my work piqued the interest of the coach, and eventually I got a graduate assistantship. That allowed me to be an assistant coach on the women’s fast-pitch softball team.

We won a national championship that year.

I got my next job at 24. I was head baseball coach and offensive coordinator [for the football team] at what is now University of St. Mary in Kansas. They’d never had baseball or football before, and I was the head coach — recruiting, working the budget, the whole deal.

Over the years, I’ve been all over. I’ve been in jobs in Kansas, North Dakota, and Ohio. Now, I’m back in Washington. I’m incredibly fortunate to have a partner in life, Jenel Chang ’94, who is a teacher and who has supported me through all of these jobs. It was years and years before I was able to make money in the profession.

Every school has a different challenge. I’m constantly trying to figure out how to put the puzzle together. I’m at Central Washington University, a Division II school that recruits kids from around the state. It’s not a place like Grinnell, where there’s national recruiting and limitations because of the [rigorous] entrance requirements. The competition level is different here. Last year, we went 11 and 1. My evaluation said “needs to improve.” The expectation here is that we win a national championship.

“She might as well have suggested I apply to Hogwarts.”

Christy Johnston Brown ’11 is a zookeeper at the Living Desert Zoo and Gardens. 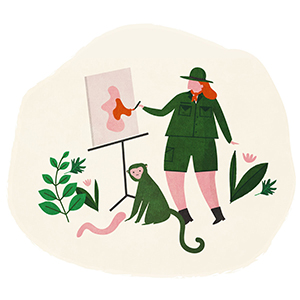 During my junior year of high school, I decided I wanted to be an art therapist. I wanted to use art to work with chronically and terminally ill children to help them deal with their feelings through creative expression. It seemed like a great way to combine my creativity and interest in psychology.

After I graduated [from Grinnell with a psychology major], I knew I had to take the GRE and take a few extra art classes to get into a graduate program to pursue this work. I kept putting it off. Finally, my parents sat me down — I was living at home at the time — and they said, “Is this still what you want to do?”

I had an emotional breakdown, because I had been studying for this since high school. To realize that this path wasn’t for me felt terrifying.

Around that time, I was doing a lot of pet-sitting. I was also re-reading a book that I had been assigned in a psychology class with [Professor] David Lopatto called What Shamu Taught Me about Life, Love, and Marriage. The book was about principles the author had learned at the Moorpark College Exotic Animal Training and Management Program, and how it was possible to train people in some of the same ways we train animals. My mom saw that and said, “Well, why don’t you apply to Moorpark?”

She might as well have suggested I apply to Hogwarts. It felt fantastical — learning to train lions, working with primates, living in a zoo.

It was a light switch. I decided to look into it. Eventually, I ended up taking some classes, applying to Moorpark, and getting in. My two years at Moorpark were some of the hardest of my life, but they were also incredible.

Today, I’m a zookeeper. I help take care of reptiles, amphibians, birds, and mammals [at the Living Desert Zoo and Gardens in southern California]. I train animals to do things like offer their paws for nail trimming or open their mouths for tooth brushing. I do outreach to schools and community centers, and I rely on the skills I learned in Grinnell theatre classes to present.

It’s definitely hard work. It can get to be 120 degrees here, and we often have to move around wheelbarrows of sand and mulch and dirt and gravel. We have to clean the habitats. And depending on what species I’m working with, animal poop can weigh a lot.

Still, I’m working at a job that fulfills me. I could never spend my all of my time sitting at a desk. Even when I’m doing the hardest physical labor, it doesn’t really feel like work, because I’m so excited about what I do.

Tell us about your own unexpected post-Grinnell path.