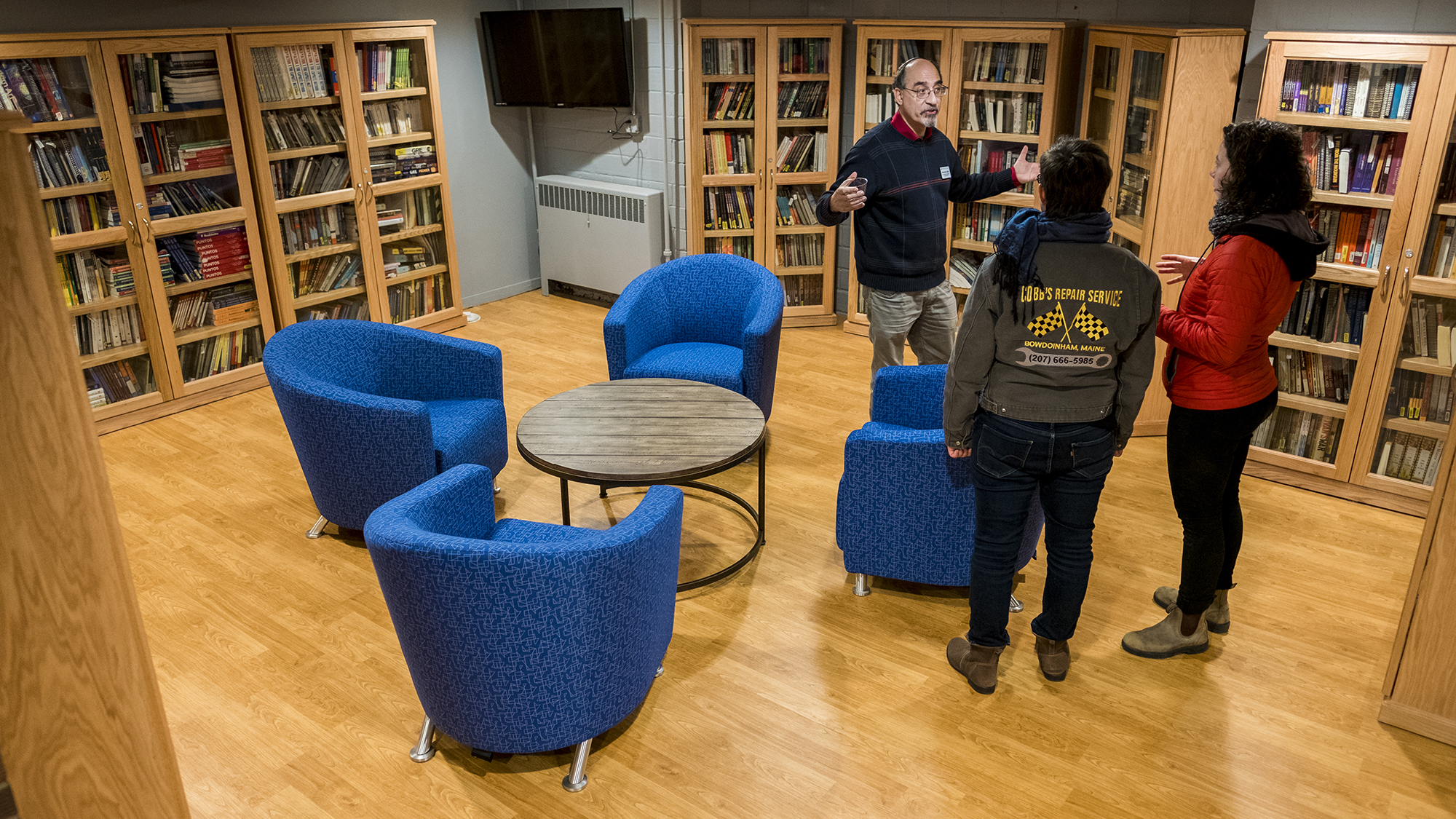 Students have teamed up with Grinnell’s Center for Religion, Spirituality, and Social Justice to launch a college textbook lending library.
Rachel Fritts ’14

In the spring semester of 2016, Tim Burnett ’19 approached Deanna Shorb, the College’s dean of religious life, on behalf of QuestBridge, a national organization for low-income students. Grinnell’s chapter wanted to partner with Shorb to develop more resources for students in need.

Shorb had just the thing in mind. As the co-organizer of a campus first-generation student program, for seven years she has asked participating students about their major obstacles and concerns. First-generation students are the first in their families to attend college, and while they are not always low income, first-gen and low-income students often face overlapping challenges.

One of those challenges, as Shorb has heard consistently every year from the students in her program, is textbook expenses. Shorb saw Burnett coming to her as a sign. It was time for Grinnell to have a textbook lending library.

Burnett jumped on the idea: “I knew that we could work to make a difference.” As a low-income student, Burnett had personally felt the burden of high textbook costs. “During my first semester at Grinnell I had to drop my Advanced Introduction to French class because I couldn’t afford the textbook,” Burnett says. “The book for that one class was my whole textbook budget for the semester.”

Getting the library up and running

Over the course of the semester, Burnett met with Shorb to work out the logistics of getting a lending library off the ground. They had to complete three major tasks before the beginning of the next school year. First, they had to approach the Office of Financial Aid and ask them to compile a list of low-income students who would be invited to use the library. Second, they had to get the textbooks. Finally, they had to shelve and catalog the books.

Shorb took responsibility for speaking with Brad Lindberg, director of financial aid, who agreed to help them out. He told her that if she and Burnett prepared information about the lending library, his office could determine the students in highest need of the service and contact them directly. That way, only the students themselves and the financial aid office knew whether any given student was on the confidential list.

With that done, Burnett took the lead in developing and distributing a poster asking students to donate their textbooks to their peers at the end of the semester. Students rose to the occasion, and by the end of the spring 2016 semester Burnett and Shorb had more than 2,000 books for their new library.

“I made so many trips with boxes and boxes of books,” says Burnett. “One day we had so many that we filled [up] the bed of [Deanna’s] truck. All of those hours required a lot of commitment, but it wasn’t for naught.” In fall 2016, a small room in the Center for Religion, Spirituality, and Social Justice (CRSSJ) officially opened its doors as the school’s new lending library.

Scaling Up And Expanding The Team

Once the library was up and running, Shorb and Burnett realized they were going to need some extra help. They decided to expand their team of two to a team of three. Ally Leicht ’19, another QuestBridge student, joined the library as student co-supervisor in the fall of 2016 and began assisting with the tasks of organizing, cataloging, and distributing the books.

And she came just in time. After all that effort spent moving books over the summer, the team got word that the CRSSJ was moving to a new location in 2017. The new library was going to have to move with it. “Without Ally, the move would not have been possible,” Burnett says.

Moving all of those books again was a daunting task, but it was also an opportunity to find the library a bigger space. Thanks to the flood of student donations, the number of textbooks had risen to nearly 3,800, and they were beginning to overflow the bookshelves. “There were even jokes about the floor caving in under all of the books,” Burnett says.

Organizing the books within a physical space is only part of the task of running a library. Another big task for Leicht, Burnett, and Shorb was determining the best way to ensure that every student who used the library was getting the books they needed in the manner most useful to them. Since Grinnell’s lending library was the only one of its kind in the country when it opened its doors, the team had to learn through trial and error.

“One of the main struggles we had at the start was the rental period,” says Leicht. Originally they only let students check out books for two days but quickly realized the short turnaround was more of a hassle than a help. “We switched to full-semester loans, which has worked out wonderfully.”

They are also trying to figure out the best way to deal with outdated textbooks and ensuring that the books they have are the ones students most need. Library use has grown from about 30 students in fall 2016, the first semester it opened its doors, to around 150 students in spring 2018. While the library originally operated on a first-come, first-serve basis, the team switched to a wish list-based approach after the first year.

“We still have work to do in creating an equitable system,” Burnett says. “It’s a tough call because we want to loan the most books out possible, but do so in a fair manner.”

Shorb hopes to continue expanding the library. She wants a software program that can help them organize the student wish list, and a way to more reliably have the textbooks students are most likely to need. Eventually, she hopes she can hire someone for a part-time position fully dedicated to the library. Until then, Shorb, Leicht, and Burnett are dedicated to making the library the best resource it can be.

“I love being able to lighten the financial strain for students and help them to focus on learning rather than money,” Leicht says.

In the mid-2000s, a group of students called Grinnellians for Economic and Social Diversity organized and ran an informal textbook lending library for a few years from a residence hall basement. Although the intent was to support low-income students, it ended up being open to all.

One major distinction between the earlier library and the current one is income, says Deanna Shorb. “Use of this library is only for those identified (very privately) by Financial Aid as low income.”