Bundles of Joy (and Snacks)

Scott and Laura Cleveland Shepherd, both class of 1982, are on the second floor of Joe Rosenfield ’25 Center behind a folding table piled high with boxes and bags of varying size, shape, and color. They’re busy handing out care packages to students who stand patiently in a line at least 20 people deep — an improvement over the queue yesterday that stretched at times to more than 100.

Alumni from around the world have spent the past year shopping, crafting, and gathering materials to create these care packages, most of which come with a personal note of encouragement, friendly advice, or words of wisdom to the student recipient.

A tradition now in its sixth year at Grinnell, the care package giveaway began as a grassroots effort by alumni who remain connected through a Facebook group and remember their own time on campus and the positive impact a friendly boost could have during mid-semester studies.

This is the third year that the Shepherds have made the 500-mile trip from their home in Tulsa, Oklahoma, to brave Iowa’s frigid temperatures, ice, and snow in February to help hand out the packages and give a kind and encouraging word to students.

“We had so much fun doing this two years ago that we decided we would do it as long as we can,” says Laura. “We brought 80 boxes in the back of our SUV this year. The drive was fine, but we forgot how high the snow gets piled in the parking lot on campus.” 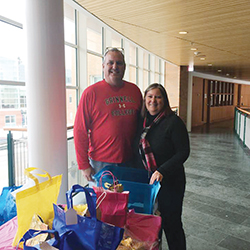 The Shepherds will remain until every student who wants a care package receives one. They, along with other volunteers, gave out more than 700 packages on the previous day alone. And before they’re done, they will have handed out every one of the 1,380 care packages created for students.

“We spend all year buying things and telling each other through the Facebook group when Target puts things on sale,” says Laura. “It is a lot of fun for everyone. Coming here is a chance to reconnect with students and it’s good to bring a little joy to them.”

“It’s all about the surprise,” says one student who quickly steps to the table to grab an unopened box with “This might be the care package for you” written across the top.

Others, like student Linnet Adams ’21, spend considerable time looking over the table, searching for the one package that speaks to them.

“Choosing a major is pretty straightforward,” she tells the Shepherds. “But you come here to pick something, and it’s really tough.”

She eyes the many options before her, bags and boxes of many colors, some with items visible to the naked eye, others sealed. Some state “gluten free,” or “vegetarian” or “gender neutral.” Others are a total crapshoot. She explores the length of the table and starts back at the beginning.

“Maybe I should just be smart and pick something with food, since I’ll be here over break,” she says, looking through a bag with snacks, soups, and chips. But then she recalls last year and how much fun it was to open a bag and find a small coloring book, colored pencils, and a whistle shaped like a pair of lips.

“Oh my God,” she says, finally spotting her package, a glittery, sealed bag labeled as a “Fundle,” short for “Fun Bundle.”

“It’s a lot of fun and a great distraction from the stress of the semester,” she says. “I love that there are options for everyone, and I love getting a note from the alum who put it together.”

Another pair of students move through the line and make their picks more quickly. Hadley Luker ’19 selects a small bag with hair chalk, suspenders, and a small flag among other things. Zachary Susag ’19 grabs a sealed box with “Packed with love from dual alums” written on top.

“The dual alums thing intrigues me,” he says.

Laura Shepherd hears him and says “Hey, that one is from us!” indicating herself and Scott, excited to see the person who picked their package.

Susag opens the box and finds several bags of snacks, a box of glowsticks, a stapler, a small amount of cash with a note saying, “Get a snack at the Spencer Grill,” and a trio of small rubber creatures he describes as “Really cute … kind of creepy, but cute.”

But the absolute favorite thing he finds is the letter from the Shepherds.

He reads from it to Luker, telling her where the couple met, about their daughter who also attended Grinnell, how they love to come back every year, and other bits of information they shared in the letter.

“That’s Grinnellian right there,” he says. “This really means a lot to me. To get a real letter and such a thoughtful gift and then to see them here and be able to thank them in person is amazing.”