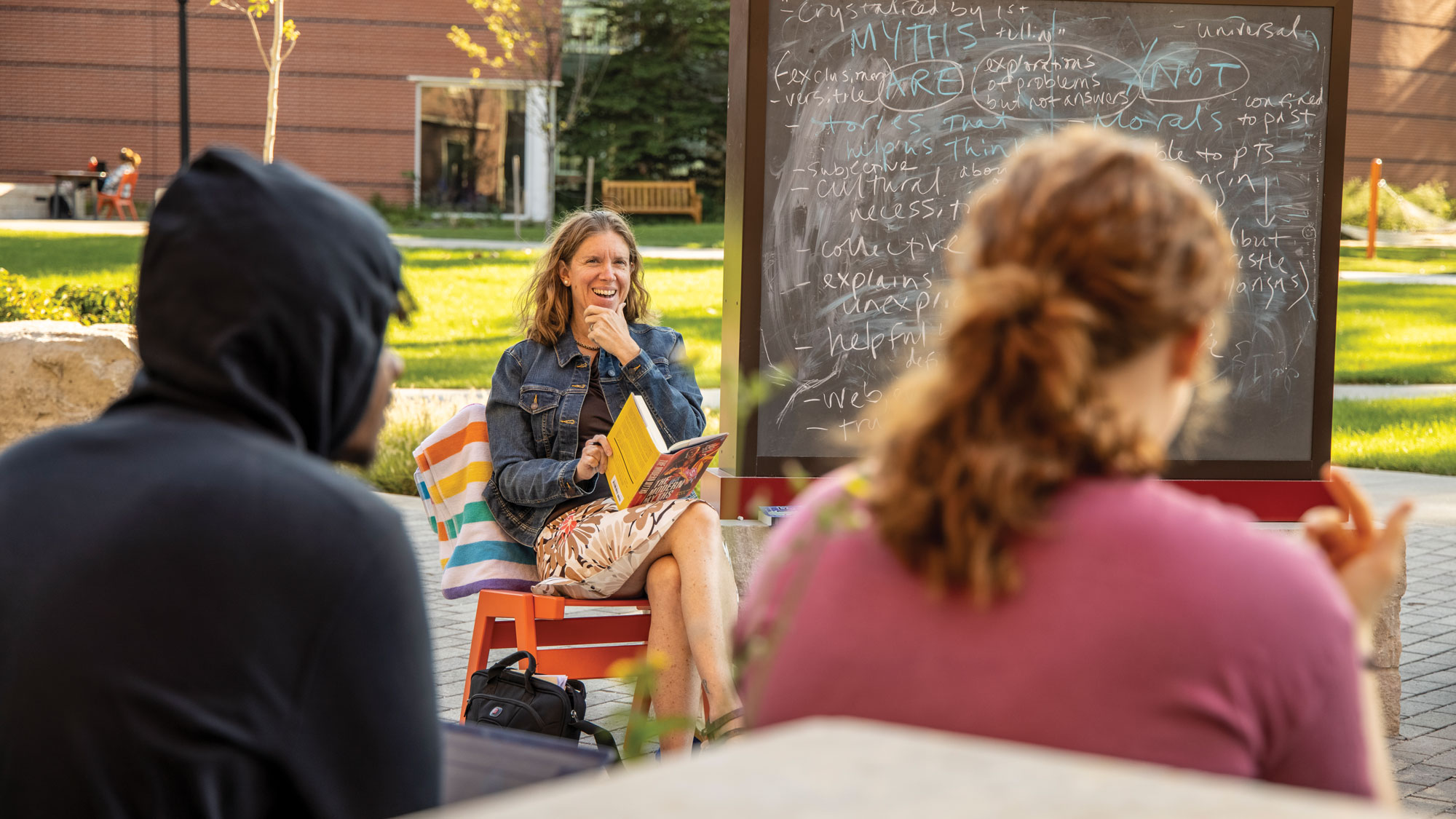 First-Year Tutorial Is the Linchpin

Few of those involved in the effort to jettison gen ed requirements and reimagine learning in 1971 could have predicted how an open curriculum would change advising relationships and become a hallmark of a Grinnell education that has lasted for 50 years.
Michele Regenold ’89 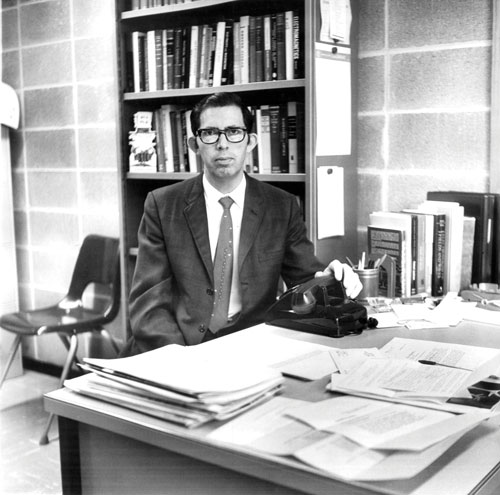 One of the things that has made Grinnell College distinctive, particularly since the early 1970s, is the freedom students have to chart their own path through the curriculum. Beginning in 1971, Grinnell adopted a “no requirements” curriculum that eliminated general education and distribution requirements except for one, a new course now called the First-Year Tutorial.

“I would have been satisfied and pleased if this curriculum had lasted for 10 years,” says Beryl Clotfelter, professor emeritus of physics and lead proponent of the proposal. “I didn’t think it was going to be a long time. And I’m really shocked it’s gone 50 years.”

A New Curriculum for a New Era

In the late 1960s, changes were afoot at Grinnell. The faculty were concerned about the student experience as well as the curriculum and its staying relevant. Clotfelter, who was deeply interested in curriculum issues at Grinnell, helped develop a new science course for nonmajors. He and other faculty who tried to develop such courses discovered that they just didn’t work. The faculty were dissatisfied and so were the students.

That experience was in part what led Clotfelter to draft a proposal for a “no requirements” curriculum, which he submitted to the faculty for consideration in February 1970. Other proposals were submitted as well, but no final decisions were made that spring. The shootings at Kent State and Grinnell’s decision to close the College early that year shifted everyone’s attention to larger concerns.

That fall, Grinnell’s faculty held weekly meetings to discuss three curriculum proposals: the current curriculum with modifications, one that relied on divisional requirements, and one with no requirements. Week after week, the faculty made motions, raised new issues, and discussed some more.

During the Oct. 5 faculty meeting, the “no requirements” proposal lost in a written vote, 42 to 45. One of the concerns about it was that faculty advising would become more difficult without required courses. Under the existing curriculum and its 50-plus required credits, advising first- and second-year students consisted mainly of scheduling and helping them get the requirements “out of the way.”

Another wrinkle to academic advising was the arbitrary way students were assigned to faculty — by the dorm students lived in. (Clotfelter notes that it took him a couple of years of having all women advisees before he realized he’d been assigned to a women’s dorm.) As a result, students and their advisers didn’t necessarily have any interests in common, making it harder to connect. Under Clotfelter’s proposal, faculty advisers “would be expected to get to know each advisee well enough to genuinely advise,” he wrote in his 2003 history. That would take time and energy on top of an already busy schedule.

How could faculty be encouraged to know their advisees better and make more meaningful connections? A small group of students found the answer.

Students Made Themselves Heard

For this part of the story, let’s start with Ric MacDowell ’68, who returned to Grinnell to work as assistant to Joe Wall ’41, then dean of the College. During the 1969–70 school year, MacDowell persuaded President Glenn Leggett to let him work with students to develop their leadership skills.

MacDowell knew very well the positive changes students could make. He had served as Student Government Association president his senior year and helped change the single-sex residence halls into co-educational halls, in part by arguing that “students could govern themselves in the dorm.” 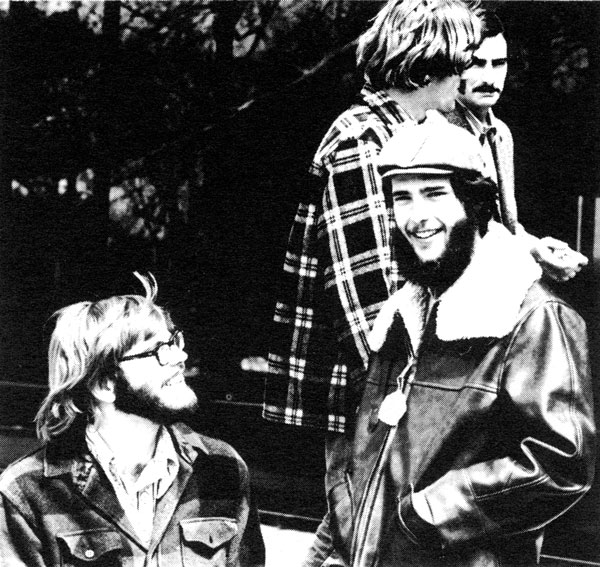 In late 1969, MacDowell began organizing dinners with students he’d identified as “people who seemed like they were going to be leaders.” They met in a private dining room in the basement of the Forum. Barry Zigas ’73 was among them.

Zigas graduated from high school in 1968 at age 17 and then made an unusual choice for the time — he took a gap year. Given that young men were subject to the draft and the very real possibility of combat service in Vietnam, it was also a reasonable choice.

During his gap year, Zigas worked and traveled across the United States and Europe. By August 1969, after a year away from studying, Zigas was “raring to go,” ready for the college experience he’d been anticipating — learning what he wanted to learn and interacting with his professors.

His initial experience did not live up to his expectations. “It seemed a lot like a fifth year of high school,” he says.

So when MacDowell invited Zigas to participate in conversations about students’ rights and what would make the College better, he was primed.

A group of students, including Zigas and Anne Walter ’73, decided to focus on the first-year experience. They looked at how it could be improved and become a more satisfying transition from high school. They surveyed two or three dozen other colleges about the details of their students’ first year. One survey response, Zigas recalls, included the description of a “freshman tutorial of some kind.”

“We felt that the tutorial was an instrumental way to introduce students to academic life at a college and help them make a cleaner break with high school, and to enable them to engage more closely with their fellow students and the faculty,” Zigas says.

They drafted a proposal for a tutorial that would be limited in size, be taught by all faculty, involve a significant amount of writing, and make the tutorial leader the students’ adviser until they chose one for their major.

One of the faculty members with whom they shared their proposal during the spring of 1970 was Alan Jones ’50, professor of history. For several years Jones had been concerned about the experience of firstyear students. He was interested in students’ opinions, so it’s likely that he read with care the work produced by the student committee.

Jones had long been aware of the tutorial system as practiced in Oxford and Cambridge. In 1960–61, he shared an office with George Drake ’56, who was serving as a sabbatical replacement for the year. Drake had just returned from Oxford where he’d been a student in the tutorial system and sang its praises to Jones.

Tutorial Makes It All Work

In October 1970, one week after the “no” vote on Clotfelter’s proposal, Jones distributed a memo to the faculty, letting them know that he intended to introduce a new motion: “Each student is required to complete the Freshman Tutorial Program.” The three-page memo detailed how the new program would work and the rationale for it, including the attributes identified in the student proposal.

“Another justification for a tutorial program,” Jones wrote, “is that it is pedagogically innovative. … It offers immediately to freshmen a different kind of learning experience, one that is particularly appropriate to the kind of college we have become in recent years.”

When Jones presented the tutorial idea at a faculty meeting, Walter recalls the excitement of the back-and-forth discussion. “I remember feeling … the thrill [that] we had hit upon something that resonated with most of the faculty,” she says.

Clotfelter amended his proposal, adding a tutorial provision, thus addressing two of the faculty’s biggest concerns about a “no requirements” curriculum — that they could teach writing skills and provide good advising in a curriculum without required courses. The tutorial proposal was fine-tuned over the next few weeks; and on Nov. 16, 1970, the faculty voted on Clotfelter’s proposal: 48 for and 12 against, with four abstentions.

In Clotfelter’s opinion, “the feature of the no-requirements curriculum which has been most important in its continued success is the tutorial as a device to bring students and advisers together.”

Tutorial Can Resonate for Years

Since fall 1971, the tutorial has been a significant part of the first-year student’s experience at Grinnell. It’s an excellent introduction to college-level writing and thinking by a faculty adviser who gets to know their students’ strengths and weaknesses, yet it’s also evolved and become even more resonant. Community building, for example, is an intentional part of the class.

For many students and alumni, the impact of the tutorial has reverberated well beyond the classroom. A few alumni from different decades shared their experiences:

It was hugely impactful for me — I was coming from a small-town public school with no access to advanced literature courses and felt way out of my league at Grinnell. Simawe liked my work and it meant the world to me. It made me feel like I belonged there.

Wild Lands: The History and Philosophy of Their Use, with Karl DeLong

[It] consisted of lots of memorable trips to the bio preserve (A flock of hundreds of blue winged teal on the water, their colors glinting in the sun! An honest-to-god “Monarch Tree” completely alive with monarchs gathering for the fall migration!) that still are vivid in my memories 47 years later.

I was a Blue Ridge Mountains gal and initially sneered at the flat, “empty” prairie landscape as “ugly.” I don’t remember what I learned specifically from that tutorial, but it sparked a lifelong love and appreciation for the subtle beauties of a prairie landscape. 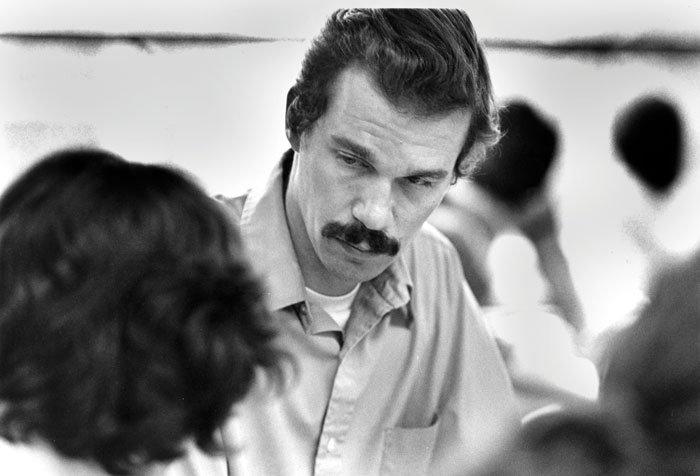 The Ethics of Research in Psychology, with David Lopatto

Peter Singer’s Animal Liberation was part of the syllabus and it rocked my world. It had never even occurred to me that animal rights was even a thing (small-town kid from an extended farming family). It really reshaped my entire worldview of nonhuman life.

Personality and Politics: Case Studies of American Presidents and Their Secretaries of State, with Wayne Moyer

My mother thought it sounded like the most dull class imaginable, but it was my top choice. We met in a private room over dinner.

One memory was my introduction to critical thinking. After reading our first assigned book (my first scholarly monograph) and discussing it for at least four sessions, Moyer asked, “So, what is wrong with this book?”

I was honestly shocked to think that there could be anything “wrong” with a book that we had studied so carefully and in such detail. I realized that “learning” was going to be different now that I was at Grinnell. As a poli sci prof myself now, I love asking my students the same question.

Going into Grinnell, social studies was my second least-favorite subject (after P.E.). In my tutorial, I learned that history is more than just memorizing facts and figures, people and places, and dates. There’s this thing called social history, and I found that I enjoyed it.

Though I’m now a programmer/web developer, I think what I learned as a history major really parallels and applies to programming. In history, there’s no one “right” interpretation, but there are better and bad ways to interpret history. In programming, there’s almost always no one way to solve a problem, but there are definitely better and bad ways. You have to think and use judgment in both history interpretation and programming. In analyzing sources, you have to be able to identify potential bias, context, and quality. In programming, when looking at potential solutions to a problem online, you have to do the same.

Share Your Experiences: How did the individually advised curriculum and/or the tutorial affect your life?

A New Required Course: For many years, Grinnell has promoted its First-Year Tutorial as the only required class outside of a student’s major, so it’s a big deal that in May 2021 the faculty approved a second required course for all first-year students. See Strategy Session, page 5, for more information.