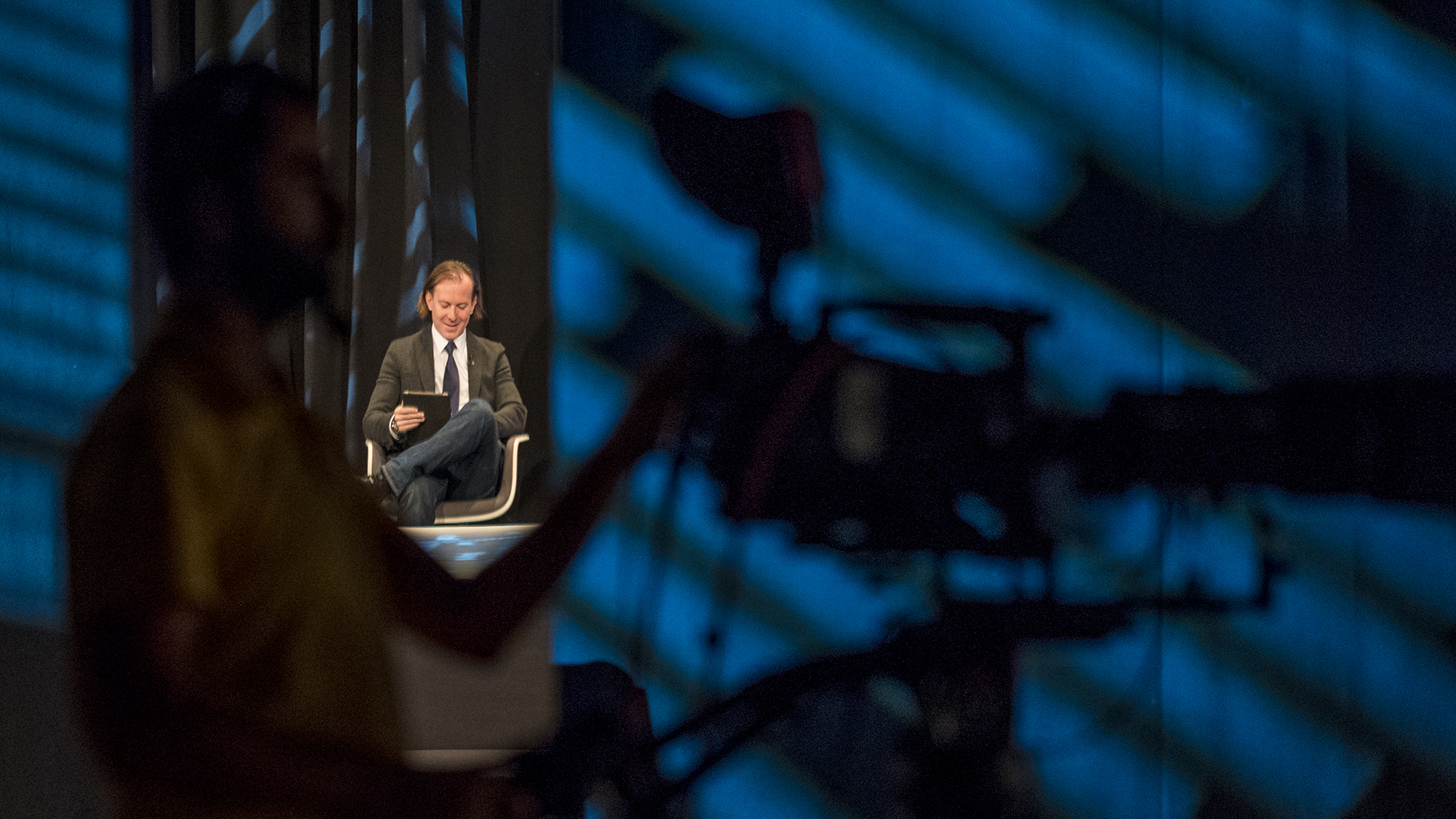 With a wry sense of humor, Florin Cîţu ’96 steps into public service as a fiscally conservative senator in Romania.
Michele Regenold ’89

Growing up in communist Romania with parents who weren’t Communists wasn’t exactly a cakewalk. Then fortune smiled, and Florin Cîţu ’96 met a Grinnell alum who was teaching economics for a year in Romania. At age 21, Cîţu headed to Grinnell with one pair of jeans and a pair of cowboy boots — he never wore the boots.

He never planned on going into politics. “Basically, I was duped into it,” he says with a grin and a swig of beer.

During the fall of 2016, a friend needed Cîţu’s help on a political campaign in Romania. Not the knocking-on-doors, stuffing-envelopes kind of help. No, rather, it was the allowing his name to be on the ballot kind of help.

“My friend says, ‘You can always quit if you don’t like it,’” Cîţu says. He won election to Romania’s senate in December 2016, representing the capital city, Bucharest.

Once he was in Parliament, Cîţu decided to take his new role seriously. Maybe he could help. Particularly with the budget.

It’s safe to say that Cîţu knows a thing or two about finance. After graduating from Grinnell with a major in economics, Cîţu pursued a doctorate in economics at Iowa State University, completing all but the dissertation. Then he took a job as an economist with the Reserve Bank of New Zealand, the first of several in international banking. He returned to Europe in 2003, taking progressively more responsible positions in the banking industry. In 2011, he left banking and opened his own consulting business in Romania.

He also started a blog, florincitu.wordpress.com, subtitled “A look at financial markets and government policies through the eyes of a skeptic.” Critiquing the Romanian government’s financial policies has been Cîţu’s hobby for several years. He’s also been consulted as an expert in finance and Romania’s economy by print and broadcast media.

He argues that private enterprise and innovation are key to Romania’s long-term economic health. “We’ve got to do something to attract investors,” he says.

“Florin understands well the issues affecting the economy in Romania,” says Jack Mutti, professor emeritus of economics. “His challenge will be to get those issues on the table.”

After 42 years under communism, the people of Romania are used to the government providing everything. The current ruling party, the Social Democrats, likes to say that the government will create jobs. Fighting that mentality is the biggest challenge, Cîţu says. “It’s tough to be on the right.”

He’s a member of the National Liberal Party (PNL), which advocates for economic freedom as well as individual liberties, such as rights of gays and lesbians. “We need to fight for both freedoms,” Cîţu says.

He wants to see more entrepreneurs in Romania and thinks the government can make that easier. “We can do some good stuff in government,” he says. Currently the regulations and bureaucracy don’t encourage entrepreneurs to take risks. There’s a fear of doing things wrong. Cîţu says people are scared that if they fail and go bankrupt, they’ll be regarded as “bad.”

Romania’s Palace of the Parliament is the second largest administrative building in the world, after the Pentagon. About 30 percent of the building is occupied, one side by the Senate and the opposite side by the Chamber of Deputies. Each large room has different ornamentation, elaborate and ornate, while power cords for TV camera crews snake down the halls.

Cîţu tried to take his Doberman to Parliament one day but was told no. Cîţu prefers to work at home anyway.

As a member of the main opposition party, Cîţu doesn’t have the power to influence policy directly with his votes, “but I make them think about it.”

He says, “Ninety-nine percent of the time, votes are political.”

Mihaela Paraschiy works with Cîţu in the Senate as chief of staff for the PNL party. She’s had a close-up view of Romanian politics since 2005. “A game like cat and dog,” she says, “never boring.”

Cîţu became a vice president of the party during his first year in office, with a focus on business. He rose quickly because “I found an empty space and I filled it,” he says.

Cîţu understands how to make himself stand out. “You need to make yourself a voice,” he says, something he had practice with well before he was recruited to run for the Senate. He also uses humor and speaks directly to his audience.

Cîţu has worked with a communications consultant to learn how to bring attention to his agenda when speaking with the media. “You have to be in control of your emotions,” he says. Early on, he tended to get red in the face. But now, “I take the high road all the time.”

It’s also important to communicate with people not as an expert, he says, but as a person. One way he does that is by not looking like a stereotypical politician with short, slicked-back hair and a tidy suit. Instead, he wears a sports coat and jeans and keeps his hair a little longer.

He also communicates with people on Facebook — he has more than 14,000 followers — and his blog.

When it comes to being on television, Cîţu only goes on evening news programs with journalists who are experienced and knowledgeable. “I bring substance,” he says. “Then you’re different from everybody else.”

He also tells the truth. “I don’t compromise,” he says. “I can always be a banker.”