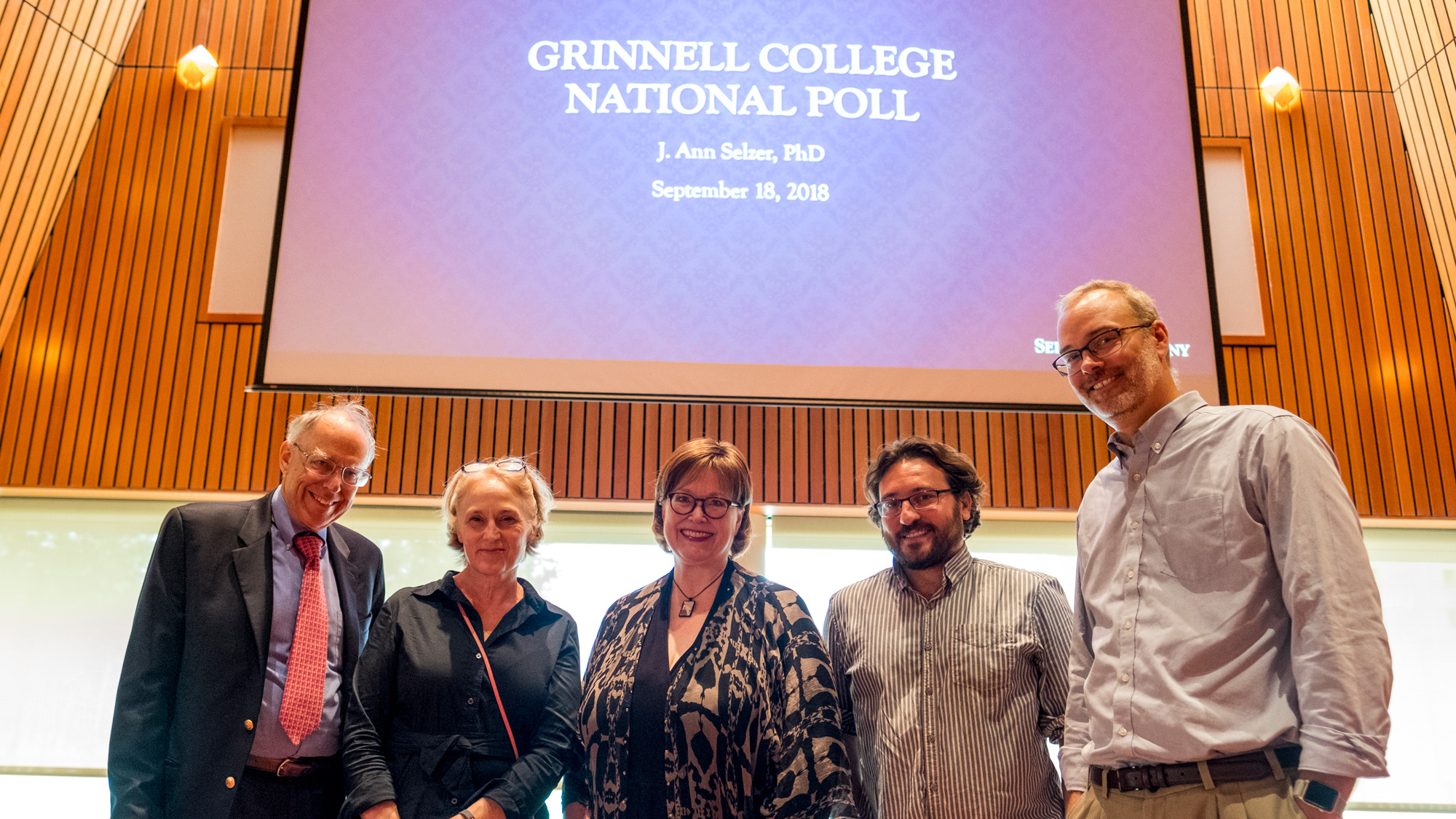 Ethan Pannell ’21 was a poll junkie long before he arrived at Grinnell. He had taken a statistics class in high school that required students to track data from the news and politics website POLITICO. He and his dad frequently pored over the stories and data from the polling data analysis site FiveThirtyEight during the 2016 election season.

So when Pannell learned during his sophomore year at Grinnell that the College had teamed up with respected pollster J. Ann Selzer to develop the Grinnell College National Poll (GCNP), he could hardly believe his good fortune. A political science major with a statistics concentration, he signed up for a short course, Political Polling: Analyzing the Grinnell College National Poll, to learn more about how to study the data collected. And in 2020 he developed a battery of queries for the GCNP linked to the idea of the American dream. More than 1,000 people answered the questions.

He remembers the moment that Peter Hanson, associate professor of political science and director of the Grinnell College National Poll, emailed the raw data to him. “It was incredibly exciting to see [the results] from a question I helped create,” Pannell says. Among other things, he learned that a significant portion of respondents were optimistic about achieving traditional aspects of the American dream, such as homeownership. 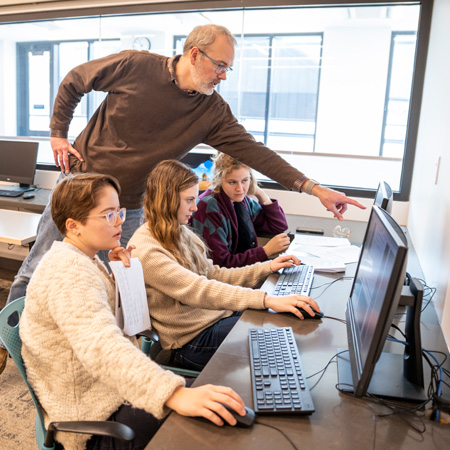 For Hanson, engagement like Pannell’s represent the very best of what the poll can offer: deep, individually tailored experiences that support meaningful student learning. “Giving students the chance to participate in the creation and analysis of our own poll is tremendously exciting,” he says. “I don’t know that there’s another undergraduate institution in the country that gives its students that opportunity. When you’re teaching political science and you have data fresh from the field? It just doesn’t get any better than that.”

Grinnell President Anne F. Harris agrees that the poll is a powerful complement to the work that professors and students do in their classes. “The issues that the Grinnell College National Poll takes on are the issues that are discussed in our classrooms, from political power to racism to democracy,” she says. “The poll gives students the ability to see just how immediate and relevant those issues are, because they see how people are thinking about them in almost real time.”

Since former President Raynard S. Kington approved the launch of the poll in 2018, Grinnell has developed six polls, taught short courses with dozens of students, and supported student MAPs and faculty research with the poll. Through the poll, Grinnell College’s name has been prominently included in top-tier national media including The New York Times, The Wall Street Journal, and NPR.

The benefits of the GCNP go beyond numbers, but there’s no doubt about it: The numbers are very, very good.

Putting the Pieces into Place

When Selzer and Grinnell worked together to create the GCNP, the timing felt particularly fortuitous. The Data Analysis and Scientific Inquiry Lab (DASIL) had been created to support rigorous data analysis. And the new Humanities and Social Studies Center (HSSC), which now houses DASIL, was intentionally designed to bring together humanities and social studies departments, supporting collaborations among faculty, students, and departments on initiatives like the Grinnell poll. 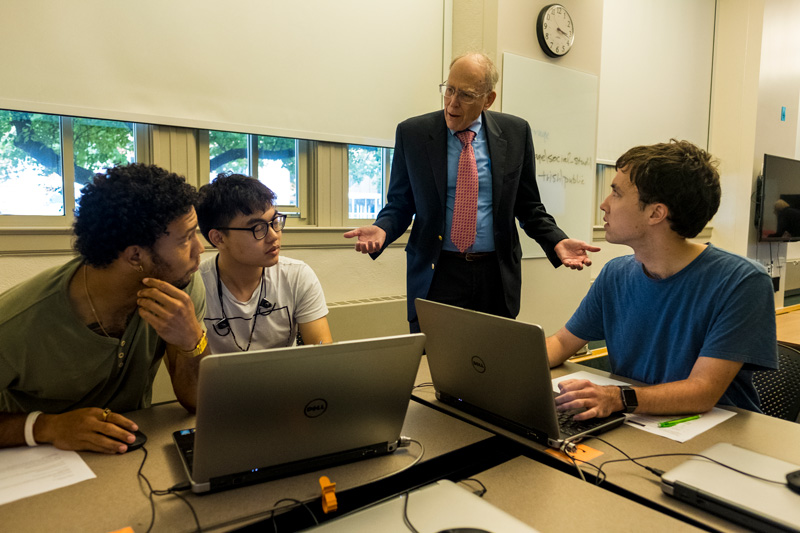 That paired well with other Grinnell strengths: a politically engaged student body and exceptional political science and mathematics faculty members. The College’s Iowa location made it a hotspot during presidential primaries and a prime hub for polling. Selzer’s company, just down Interstate 80 in West Des Moines, had a coveted A+ rating for accuracy and methodology from FiveThirtyEight.

Selzer saw an opportunity to raise Grinnell’s profile with a national poll. And she was delighted to work with a school whose values aligned with her own. “When I saw that Grinnell’s unofficial motto was ‘Ask hard questions, question easy answers,’ I got really excited,” she says. “What could a pollster want more than that?”

Students who work with the poll data get insights about the country that go well beyond what they could learn from a textbook or the daily news.

For example, as part of a polling short course she took with Hanson, Georgia Rawhouser-Mylet ’21 analyzed data collected just before the 2018 elections about political activity.

At the moment of polling, the story of women’s political participation had taken center stage in the media. A handful of events, including the Women’s March after President Trump’s inauguration, an enthusiastic new group of women running for office, and predictions of a “blue wave” that ultimately came to pass, led many pundits to suggest that women’s interest in politics and voting had skyrocketed.

But Rawhouser-Mylet was less interested in the media narrative than what the numbers said. She pulled data from the GCNP to dig into the details. “We expected that we would see a difference — that women would be more politically active than men,” she recalls.

Their work found no statistically significant relationship between political activism and respondent’s gender — or party identification or race, for that matter. The initial hypothesis didn’t pan out — but Rawhouser-Mylet didn’t mind. “It made the analysis more interesting,” she says.

Selzer, who occasionally speaks to students taking polling short courses, says that counterintuitive results are common. “I ask [students] what their hunches are about the way [a poll] is going to turn out, and very often, their hunch doesn’t turn out,” she says. If the results they want don’t show up in the data, “they’ve got to be able to walk away,” she says.

From Hanson’s standpoint, these types of surprises — which he sees frequently in his classes — are golden teaching opportunities. “It’s a wonderful moment when you see somebody being awakened to the possibility that they have to re-evaluate the way they’ve been looking at the world, because the data doesn’t support the assumptions they’ve had,” he says. “Testing your own suppositions against the data teaches us all to have humility.”

The process of creating polls, collecting the data, and analyzing the numbers takes time and demands serious intellectual firepower. But it also leads to a more accurate understanding of the world. “The phrase that I use is research, knowledge, wisdom,” Selzer says. “You gather the best data you can, and you turn that data into knowledge. Then, what do you now know that you didn’t know before? You can turn that knowledge into wisdom by asking: What should I do with [this knowledge]?” 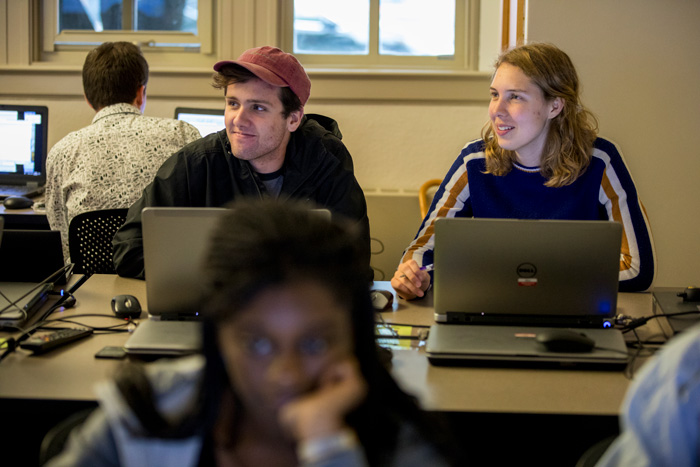 Ethan Pannell ’21 and Georgia Rawhouser-Mylet ’21 have both completed significant projects with the GCNP.

Some students' work on the poll has already paid off in settings beyond Grinnell.

Max Hill ’20, now working on a master’s degree in public policy at the University of Michigan, took a survey design class while he was at Grinnell and did research with Hanson. The knowledge he gained from the process — which included the challenge of determining what he actually wanted to understand from the data — has helped him with his current statistics coursework. “Having a real-world experience with statistics reinforced key concepts so that I really understand them,” he says.

Students aren’t the only ones taking advantage of the poll’s unique value. Caleb Elfenbein, associate professor of history and religious studies and director of the Center for the Humanities, had attended some of the earliest meetings for the GCNP. He was curious how the poll might help him explore his interest in religion, community, and public life in new ways. He also wanted to learn about possibilities for working through the center to connect the humanities and humanistic social sciences at Grinnell to the poll.

He was drawn in by the idea that he could collaborate with polling experts to create questions in areas that were most interesting to him. In 2018, he worked with Hanson and Selzer to devise a series of questions about equality, religion, and what it means to be American.

The results illuminated a gap that was far greater than he might have initially imagined: 91% of respondents said that treating people equally was core to being American, which stood in stark contrast to existing data suggesting that approximately half of all Americans had doubts about whether Muslims truly could be Americans. The tension between those numbers led Hanson and Elfenbein to co-author an op-ed for The Washington Post.

Those statistics also served as a central framing device for Elfenbein’s recent book, Fear in Our Hearts: What Islamophobia Tells Us About America. The poll results succinctly illustrated a larger and more complex problem. It was an irresistible hook. “Numbers have currency,” Elfenbein says. “They can grab attention, offering the chance to then present data in a more humanistic fashion by focusing on stories behind the data.”

Since then, Elfenbein has created other questions for the poll and worked with Hanson to develop a course on creating polling questions. He is eager to widen the pool of students who use it to investigate ideas that animate them. “Political science and economics students see those connections,” he says. “My goal is to pull in more students from the humanities to think about how we can translate humanistic questions into questions that are appropriate for polls.” 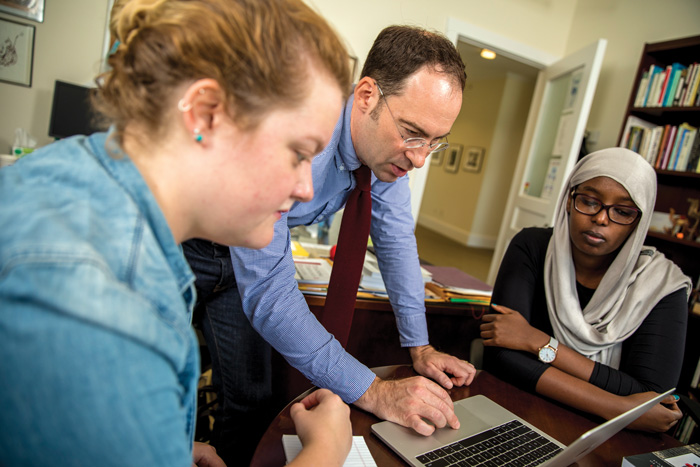 Grinnell College students Julia Schafer ’18 and Farah Omer ’19 work with Caleb Elfenbein on a 2017 project mapping incidents of Islamophobia in the United States.

Faculty are finding ways to bring the poll’s data and details into their classrooms. Xavier Escandell, associate professor of anthropology and director of DASIL, says there are numerous ways that the poll can be integrated into Grinnell’s classes. “I regularly teach Introduction to Statistics,” he says. “The GCNP is an excellent tool for students to undertake serious statistical analyses and practice using data visualization tools. It’s great when students can use data that is so close to home.”

The past three years have offered students and faculty many ways to take part in aspects of the poll, but Hanson says they’re only beginning to tap into the possibilities. “We’ve experimented with different ways of involving both students and faculty, and we’ve learned a lot,” he says. “We also know we have a group of students excited about the poll and looking for opportunities to engage with it, so we want to generate as many of those opportunities as possible.”

Along with the many other opportunities that Grinnell offers to support student learning both in the classroom and beyond it — from internships and off-campus study to research and Mentored Advanced Projects — the poll is a distinctive “tool in the toolbox” for Grinnellians. “At Grinnell, we find that we often ask questions in a way that’s just a little different or has a slightly different emphasis than other polls,” Hanson says. “There’s a real richness there.”

And as the years tick by, the general public’s familiarity with the poll will only grow. Already, the recognition is significant. After Grinnell’s August 2020 poll, for example, the College garnered some 180 major media mentions, from NPR to Bloomberg to USA Today, resulting in widespread national awareness for Grinnell and its programs.

For President Harris, the even bigger goal is to use the poll to put Grinnell’s values into action and enhance its role as a laboratory for global democracy. “People get to see what we do, from coming up with questions to doing analysis,” she says. “The GCNP puts the core habits of a democracy — research, deliberation, and collaboration — into practice. The general public sees Grinnell College at work in its mission,” she says. 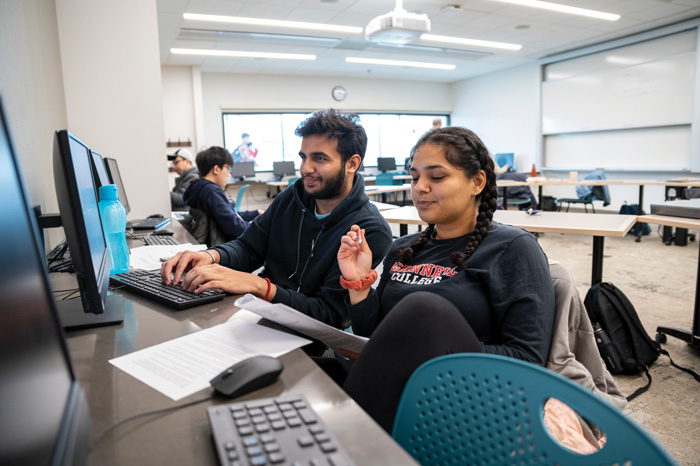 Govind Brahmanyapura ’21 and Razmeet Samra ’20 analyze data from the poll.