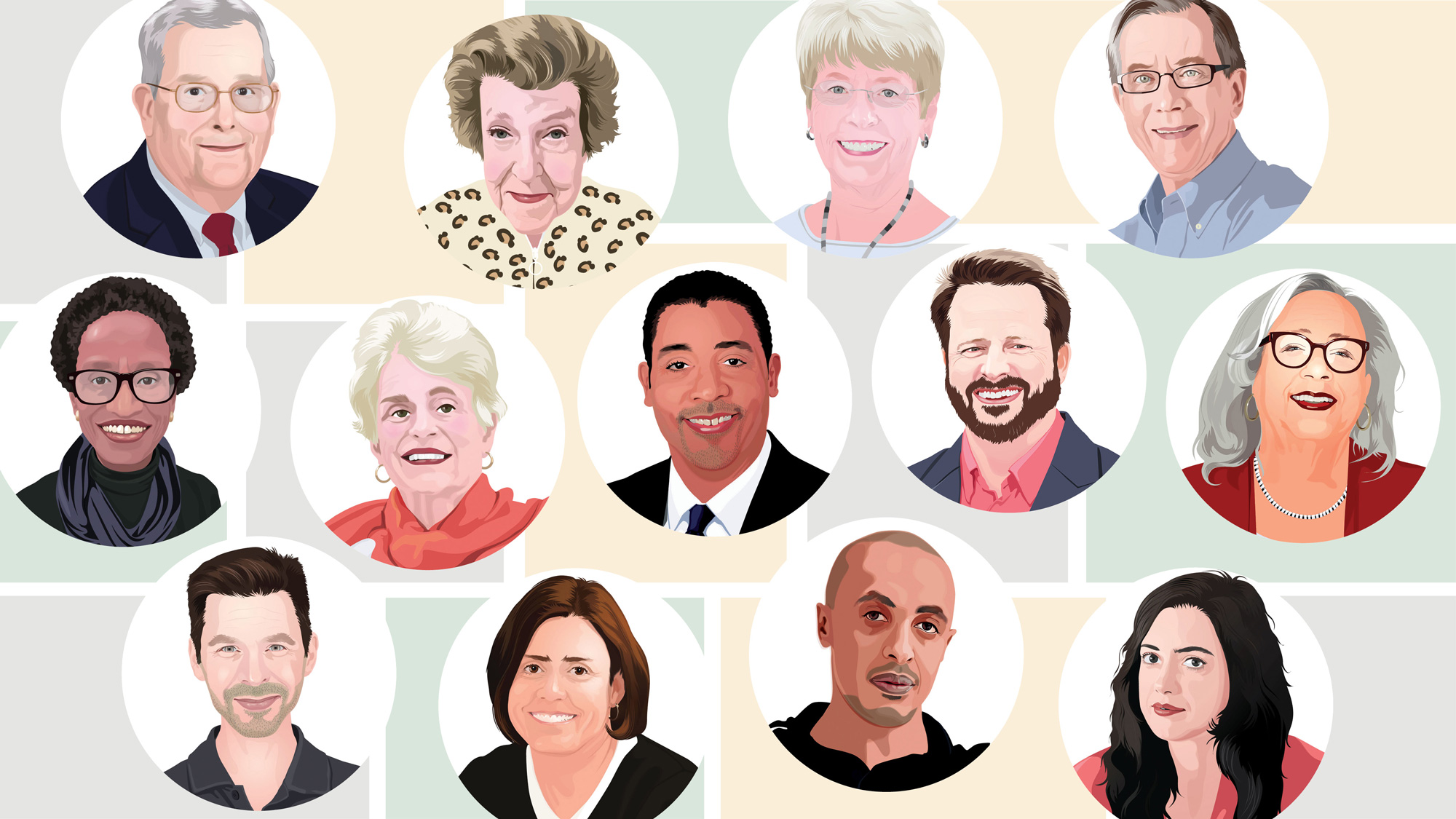 How to Stand Out from the Crowd

These 13 Alumni Award winners epitomize what it means to be a Grinnellian.
Jeremy Shapiro, Illustrations by Pratap Sharma (pixinografix)

The Alumni Awards recognize individuals who embody Grinnell College’s mission of lifetime learning and service. Recipients have distinguished themselves by their service to their careers, their community, and Grinnell College.

Alumni are nominated annually by their classmates and peers, and the Alumni Council selects the recipients. The council this year selected 13 recipients. We’re thrilled to share their stories in the pages that follow.

For his leadership in expanding Grinnell’s facilities as a trustee

Part of a long line of Grinnellians, Richard Booth was a key force in expanding Grinnell College’s facilities during his two decades on the Board of Trustees. Booth served as a jet pilot in the Air Force before embarking on an impressive business career at Lennox Industries. He became a trustee in 1982, serving with dedication, dependability, and excellence while also participating in many class and College activities.

For adding beauty to the world with her paintings

For the past 37 years, Joan Fuhrman Jones has been doing what she enjoys most — painting. Focusing mainly on watercolors and pastels, she has won more than 75 awards and prizes, and her art has been featured in more than 100 juried shows and competitions. While she majored in art at Grinnell, Jones put aside painting early in her career for public service roles, serving as a program director for the YWCA and working in public relations for the American Red Cross.

For being a class connector and vigorous volunteer

Barbara Hunt Moore has rejoiced with the members of the class of 1965 in their successes, sympathized with them during losses, and kept the class linked together through detailed, friendly class letters. She has written more than 70 class letters since becoming a class agent in 2001. While leading the International City/County Management Association’s publishing and information resources department has kept her busy, Moore also has found time to give back to her class and alma mater by serving on the Alumni Council, participating in Grinnell-in-Washington regional events, and helping plan reunion activities.

For her devotion to environmental education

Dorothy Dosse Metzler has been planning, leading, and implementing change since she was a student at Grinnell. An educator and a naturalist, she uses the outdoors as her classroom. For example, she started Hudson Watch, a summer program for science teachers to do a field investigation of blue crabs in the Hudson River. Later, as education director at a 2,300-acre South Carolina greenway, she created programs for elementary school teachers, showed them how to use the outdoors as a classroom, and developed programs about the human history of the area.

For her deep conviction that education is the essential path

Delabian Rice-Thurston’s dedication, commitment, and passion for higher learning is commendable and inspiring. For 17 years, she served as the executive director of Parents United for the District of Columbia Public Schools, a parent organization advocating for adequate funds for Washington, D.C., schools. “Nobody left the city because it didn’t have a baseball team or because the convention center was too small,” she said at the time. “They are leaving our city because we don’t have good schools for children in their neighborhoods.” Rice-Thurston attended PTA meetings all over the city to encourage parents to be advocates for education. She later taught social studies in the district’s schools in an effort to solve problems by working on the inside. At the age of 64, she started working on her Ph.D. at Howard University, investigating evidence that conditions endemic to states that reduce achievement for even the best students are not analyzed in the United States.

For groundbreaking research and leadership of the Howard Hughes Medical Institute

The only Grinnellian to win a Nobel Prize, Tom Cech has had an exemplary career including breakthrough research, decades of teaching, and 16 years serving as a Grinnell College trustee. Cech received the 1989 Nobel Prize in Chemistry for the co-discovery of the catalytic properties of RNA. He served for a decade as president of the Howard Hughes Medical Institute and then returned to the University of Colorado at Boulder as director of the BioFrontiers Institute. He has authored more than 350 publications.

Encourages, reaches out, steers, connects, teaches, shares, guides, and mentors: All of these words are used to describe Merryll Penson. During her 32-year career, Penson infused her spirit and technological understanding into libraries throughout the state of Georgia. She helped establish a groundbreaking statewide electronic library, GALILEO (Georgia Library Learning Online), and made sure that resources were open to everyone. As executive director of library service for the University System of Georgia, she directed the electronic library, coordinated collaborative efforts of 29 libraries, and led a systemwide implementation of next-generation library platforms. During her student days at Grinnell, Penson played an important role in the foundation of Concerned Black Students (CBS) and the Conney M. Kimbo Black Cultural Center (BCC), including serving as the first BCC house monitor.

Through his tireless work as an attorney and author of legislation, Joel Shapiro is at the vanguard of fighting human trafficking in the United States. His inherent goodwill, promotion of social justice, and ability to see inequities drives him to identify strategies to create social change. In his law practice in Portland, he specializes in advocating for domestic victims of sex trafficking, as well as consumer protection cases. While earlier working as chief counsel for U.S. Sen. Ron Wyden of Oregon, Shapiro helped craft national anti-trafficking legislation. He also is co-founder and executive director of the Trafficking Law Center, which provides pro bono legal services to Oregon trafficking victims and survivors. “I can trust and confide in Joel without feeling re-victimized or re-traumatized,” said one survivor. “He’s made a positive impact on my life.”

For her landmark scientific research on cancer therapies

Julia Wulfkuhle has worked for more than 20 years to improve therapies for cancer at the National Institutes of Health and now is a research professor at George Mason University. She recently published a landmark scientific paper describing a revolutionary method to identify drugs that are most effective at killing a highly aggressive form of breast cancer. A frequent mentor, Wulfkuhle was involved in establishing the Aspiring Scientists Summer Internship Program for high school scientists from underrepresented minority groups.

For fostering inclusiveness and the protection of worker rights

With a remarkable ability to listen to people on all sides of complex issues, David White has thrived in his role as national executive director and chief negotiator of the Screen Actors Guild-American Federation of Television and Radio Artists. As a labor and entertainment attorney, he has promoted inclusiveness and the protection of worker rights. White also is a director for the Federal Reserve Bank of San Francisco and a Grinnell College life trustee. He chaired the College’s Board of Trustees from 2007 to 2011.

For his mentorship and commitment to the Grinnell community

Jacob Willig-Onwuachi gives his time generously and is known for his diplomacy, mentorship, and devotion to the Grinnell community. As an associate professor of physics at Grinnell for a dozen years, he conducted collaborative research with undergraduate students in magnetic resonance imaging and medical physics. With a longstanding commitment to diversity, he has been involved in numerous campus and community organizations. He is now a clinical professor of physics at Boston University.

Matheos Mesfin identified cultural factors that prevent East Africans from taking advantage of educational opportunities. Then he went to work on fixing the problems. In Washington, D.C., he founded the Institute for East African Councils on Higher Education, which has opened doors to college for immigrants and first-generation immigrant students of East African heritage. The institute tailors scholars’ high school curricula and helps them complete college applications and interview effectively. As a result, more than 100 institute students have landed in four-year colleges and universities, including Grinnell College, Stanford, and MIT. In a 2018 letter to Mesfin, President Raynard S. Kington wrote, “Getting promising students to consider the whole range of educational opportunities is a challenge that will need to be addressed on many fronts, and I admire your drive to confront it in an underserved community close to your heart.”

As the immigration and border affairs reporter for the San Antonio Express-News, Silvia Foster-Frau has brought attention to important issues while maintaining a humanitarian perspective that is deeply aligned with the values of Grinnell College. During the 2017 Sutherland Springs church mass shooting, she broke national stories and wrote heartfelt long-form articles. Her extensive reporting on immigration has made her to become a sought-after expert and earned respect from her peers, and she won the 2019 Texas AP Star Reporter of the Year award.

Nominations for future Alumni Awards are accepted at any time. To nominate a fellow Grinnellian,  complete the nomination form.