How a treasured friendship turned into a biology professorship

Students in Leslie Gregg-Jolly’s First-Year Tutorial course, What Makes You You?, are exploring identity formation. To demonstrate the role of relationships, Gregg-Jolly is incorporating a real-life example into the tutorial about a friendship formed in the mid-1970s.

John Chambers ’77 and Doug Johnson ’77 got to know each other during swim team practice at Grinnell. Those bonding experiences have stayed with Chambers more than 45 years later and played a role in his decision to endow a biology professorship in honor of Johnson.

“The idea that they had such a meaningful friendship — and the impact it had on John’s life even though Doug died so young — is extremely meaningful to me,” Gregg-Jolly says. “I teach good, conscientious students who are great about focusing on learning in my classes. I also want them to pay attention to the people they are with. I think forming relationships is a really critical part of their experience in college. This has been a tool I can emphasize due to John’s generosity.”

Johnson majored in biology at Grinnell and was particularly interested in the fields of human anatomy, physiology, morphology, and molecular biology of animals. Sadly, his career in those areas was cut short. In 1981, while attending graduate school at Wake Forest University, Johnson died in a hiking accident in the Blue Ridge Mountains.

“I think Doug would have been very pleased with Dr. Gregg- Jolly’s appointment because she will carry on the tradition of facilitating learning in cell and molecular biology,” Chambers says. “I’m delighted she will be helping students who — as Doug once did — are attempting to launch their careers in science or in medicine.”

A molecular biologist and geneticist who studies DNA damage and repair in bacterial systems, Gregg-Jolly has taught at Grinnell for the past 28 years and serves as chair of the College’s biological chemistry major. She has mentored nearly 40 Grinnell student research assistants, co-authoring papers with many of them. She says the funding associated with the professorship will help her build community among biological chemistry majors.

Gregg-Jolly was one of six Grinnell College faculty members ( joining Tamara Beauboeuf-Lafontant, John Fennell, Leslie Lyons, Elizabeth Prevost, and Hâle Utar) that were honored at the College’s 2021 Installation Ceremony for Named Chairs and Professorships on Sept. 30 at Herrick Chapel. Chambers attended, as did Johnson’s brother, several friends, and fellow swim team members. A recording of the installation event can be viewed online.

“The ceremony was not only to honor the career of Professor Gregg-Jolly but also to honor the memory of Doug Johnson,” Chambers says. “It was a fine tribute to them both.”

Johnson and Chambers competed on the swim team together under coach Ray Obermiller. Both lettered all four years, and they served as cocaptains during the 1975–76 and 1976–77 seasons.

“We had a very strong team, and it became stronger as our time at Grinnell went on,” Chambers recalls. “Our senior year we won the conference championship. It was the first time in a decade that Grinnell had won the championship, and it was the start of many more conference victories for Coach Obermiller.”

Chambers, who retired as chairman of Standard & Poor’s sovereign rating committee in 2017, returned that year to Grinnell to attend three molecular biology classes and talk with biology faculty members. He saw firsthand how faculty members are encouraging and supporting students interested in health-related careers. This fall, Chambers will speak to Gregg- Jolly’s First-Year Tutorial class. She’s using his visit to demonstrate how liberal arts skills can contribute to successful careers.

“Academics are at the core of what Grinnell is all about,” Gregg-Jolly says. “This was a gift in recognition of the impact that academics and relationships with faculty have on our students. It’s such a lovely thing to create for a friend. It’s an incredible honor to be the recipient.” 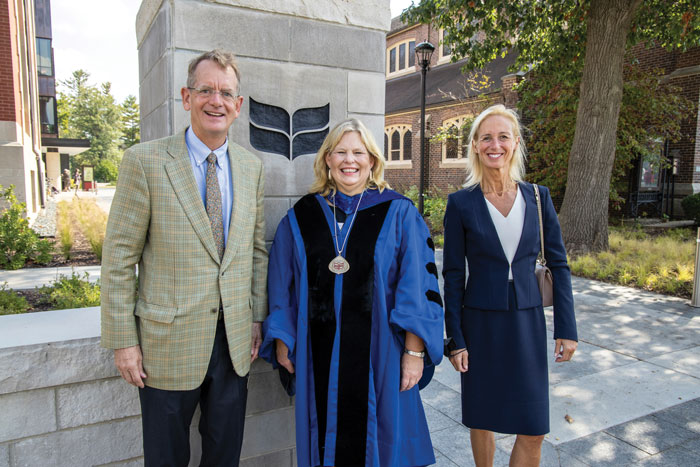