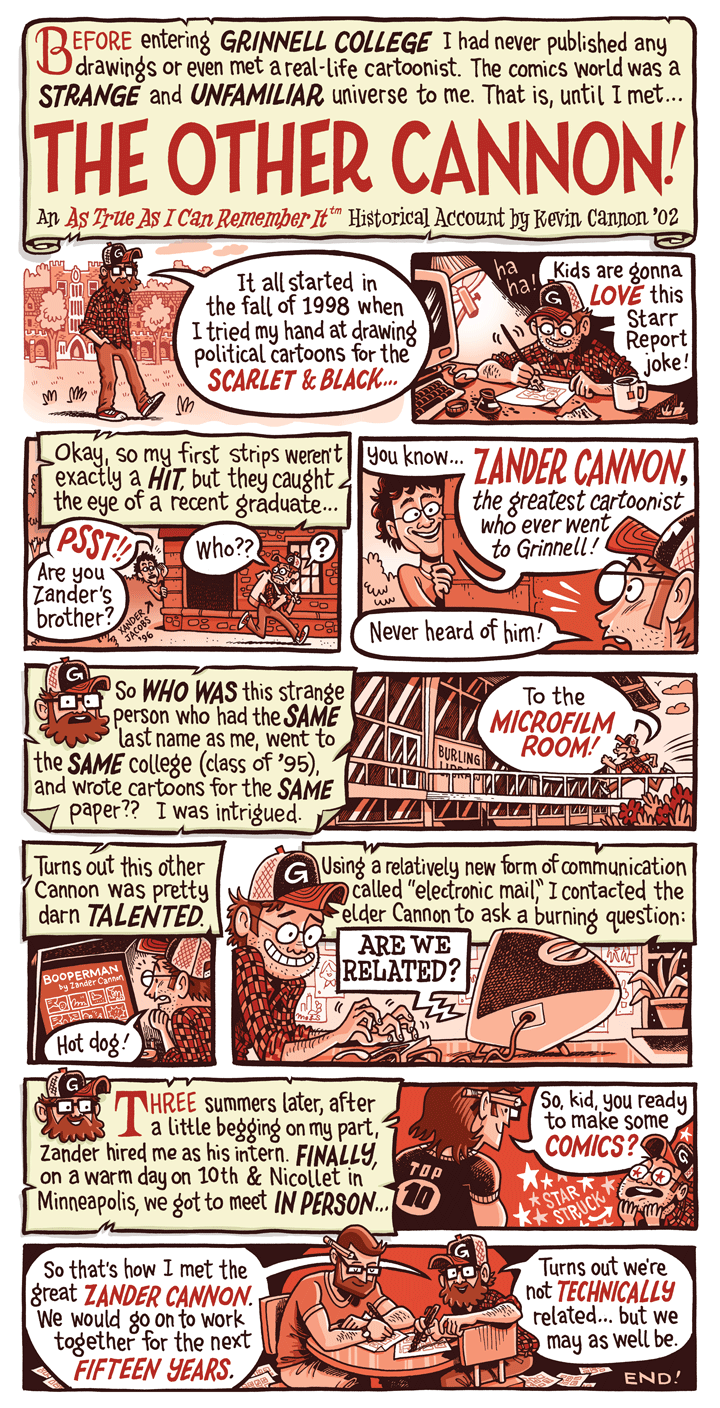 Before entering Grinnell College I had never published any drawings or even met a real-life cartoonist. The comics world was a strange and unfamiliar universe to me. That is, until I met... The Other Cannon! An As True As I Can Remember It(tm) Historical Account by Kevin Cannon ’02

[panel] Kevin, bearded and wearing a plaid shirt and G cap, strolling past Gates/Rawson tower. Text: It all started in the fall of 1998 when I tried my hand at drawing political cartoons for the Scarlet & Black...

[panel] Xander Jacobs ’96 leans around the corner of a building and catches Kevin's attention. Text: Okay, so my first strips weren't exactly a hit, but they caught the eye of a recent graduate... Xander: PSST!! Are you Zanders's brother? Kevin: Who???

[panel] Xander grins at a surprised Kevin. Xander: You know... Zander Cannon, the greatest cartoonist who ever went to Grinnell! Kevin: Never heard of him!

[panel] Kevin dashes to Burling Library. Text: So who was this strange person who had the same last name as me, went to the same college (class of ’95), and wrote cartoons for the same paper?? I was intrigued. Kevin: To the microfilm room!!

[panel] Kevin types a message on an old Macintosh computer, with pictures posted on the wall behind him. Text: Using a relatively new form of communication called "electronic mail," I contact the elder cannon to ask a burning question: Are we related?

[panel] Star struck Kevin, with liberal stars in his eyes, meets Zander. Text: Three summers later, after a little begging on my part, Zander hired me as his intern. Finally, on a warm day on 10th & Nicollet in Minneapolis, we got to meet in person... Zander: So, kid, you ready to make some comics?

[panel] Bearded Kevin and Zander sharing a table while drawing cartoons. So that's how I met the great Zander Cannon. We would go on to work together for the next fifteen years.

Kevin: Turns out we're not technically related... but we may as well be.