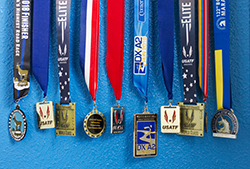 During his first semester at Grinnell College, Roger Sayre’s Norris Hall friends dubbed him “a menace to society,” or “Menace” for short. “I hadn’t really taken up running yet, so I had all this excess energy,” Sayre says by way of explanation.

Long retired from bouncing off walls and pulling pranks, the 60-year-old Colorado resident remains strenuously youthful. And when Sayre laces up his cross country spikes or racing flats, only a handful of sexagenarians on the entire planet can match strides with him at distances from the mile to the marathon.

Though he dabbled in field events while attending high school in Iowa City, Iowa, it was viewing the 1976 Montreal Olympics on television that inspired Sayre to get into running. “I thought (U.S. Olympic 400-meter hurdle champion) Edwin Moses was the coolest guy, and I wanted to be just like him,” Sayre recalls with a laugh. But after being “blown away” in a few Iowa City all-comers meets, Sayre traveled an hour west to Grinnell that August without a single track medal to display in his dorm room.

The blond freshman was spotted running around campus during New Student Days by the late beloved coach and academic adviser Ray Obermiller, who tried to interest Sayre in cross country. Obe got a no-nonsense reply: “I told him ‘Nah, I’m not a distance runner,’” Sayre recalls. “’Those guys are crazy, running 10 miles a day and 15 on Sunday. I’m not doing that.’”

During his first indoor and outdoor track seasons as a Pioneer, Sayre gradually realized that he was no hurdler or sprinter, and that endurance was his forte. He joined the cross country team the following fall and, nagging injuries notwithstanding, developed into a strong varsity runner, capping his Grinnell career with All-Midwest Conference honors in the steeplechase at the 1980 outdoor track and field championships.

Armed with an anthropology degree, Sayre left Grinnell determined only to return to his native Colorado and improve his running. But he eventually completed a master’s in rangeland ecology at Colorado State University in Fort Collins and a doctorate in biology at the University of North Dakota in Grand Forks.

As to running, Sayre did indeed improve once out west. He notched a pair of mid-2:30s marathons at altitude while in grad school at Colorado State. But a lengthy injury following his second 26.2-miler prompted him to take up cross country skiing as a winter alternative, and for 20 years he avoided racing longer than the half-marathon distance.

During his thirties and forties, Sayre focused on running from early April through October. His “off season” was devoted to almost daily skiing, with a little easy running mixed in. The Sayre family — wife Tamara and two sons — lived in Fairbanks, Alaska, between 2004 and 2014. Although competitive skiing took slight priority during those years, Sayre did some fine running while living in the 49th state, including several age group wins and records set at the grueling Equinox Marathon.

“Alaska was a fantastic place to live and raise our two sons,” Sayre says, “but we were ready to get back to Colorado and a milder winter climate.” Returning to Colorado also appealed to Sayre due to the unmatched running scene in the Boulder/Denver region and easy access to high quality masters competition.

“Last summer I thought about turning 60 and having goals on the local and regional level, maybe going after some state records,” he says. “And then I looked at the times the top 60- to 64-year-olds were running and I thought, ‘Hey, I could be up there with those guys.’”

So far in 2018 Sayre hasn’t merely been “up there,” he’s been the nation’s dominant 60-year-old distance runner with age group victories at several major road races. In late February he was overall masters (age 40-plus) champion as well as 60–64 age group winner at the prestigious Gasparilla (Florida) 15K. He also won titles at USA Track & Field-sanctioned 8K and half-marathon national championship events and at the 40th annual Bolder Boulder 10K, one of the world’s largest road races.

Sayre’s finest performance thus far in 2018 was at the Shamrock 8K in Virginia Beach, where he completed the 4.97-mile race in 28 minutes 10 seconds, an agonizing 3 seconds off the age 60–64 American record for the distance. His exemplary performances this year have enabled his team, the Boulder Road Runners, to contend for the national 60–69 team championship in the yearlong USA Track & Field grand prix.

Not everything has gone smoothly for Sayre of late, however. Horrendous weather — “the worst conditions I’ve ever raced in, at any distance, anywhere” — during the Boston Marathon in April had him hypothermic at 22 miles. Sayre fell well off his goal pace and crossed the line in 3:12:41, but savored the experience nonetheless. “Even though I struggled at the end,” he says, “to get fourth in my age group in such a big event under terrible conditions was a bonus, and I fought for it every step of the way.”

That fighting, youthful spirit is really what has enabled Sayre to excel for so many years, though he prefers challenging himself to beating others. With the prospect of more national titles and even a few American records later this year or next, Sayre is taking everything in stride. “I don’t know that I’m all that competitive,” he explains. “I just like the process, getting out there and doing it. The competing just kind of goes with it.”