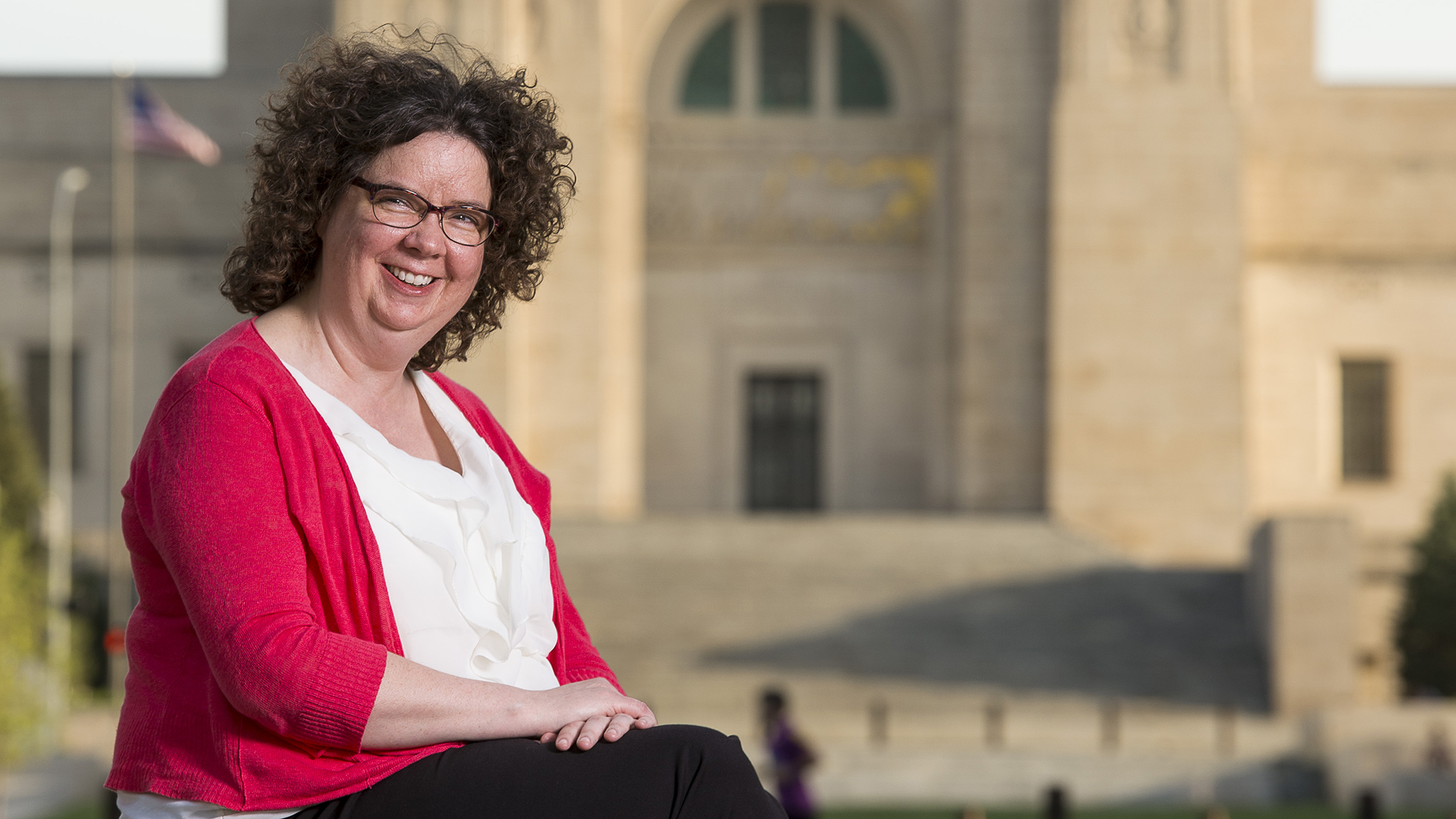 As one of just three full-time lawyers working at American Civil Liberties Union of Nebraska, Amy Miller ’93 puts her boundless energy, empathy, and passion to use on a daily basis. She seems so entirely in her element that it’s hard to imagine there was a time when she balked at the thought of becoming a lawyer.

An art history major from suburban Nebraska, when Miller first came to Grinnell she pictured herself in a profession that involved plenty of books and little cause to be the center of attention. But a series of experiences at Grinnell and an insightful adviser changed all that.

“I feel like a jellyfish that rode the wave and washed up in the most perfect ocean that I could have hoped for,” says Miller. Now, as a mentor with the Grinnellink internship program, she’s helping a new generation of Grinnell students find their own perfect ocean.

When Miller was considering her options for college, she had a few criteria. She knew that she wanted to go to a smaller school in the Midwest with rigorous academics and that she was not interested in sports or a Greek system. She added Grinnell to her list because the promotional materials she received included student-written essays that were “sassy, funny, and quirky.” She decided to visit.

“The minute I stepped on campus, a guy walked by wearing one of those long, floaty, Indian cotton skirts, and I thought ‘Yes, this is where I want to go!’” laughs Miller. “My parents were totally freaked out but I knew I was already in my right place.”

Before coming to Grinnell, Miller had not experienced much outside her “suburban bubble” in Nebraska. “My parents were more on the conservative side … they certainly weren’t taking me to protests or anything like that,” she jokes.

But her undergraduate experience was to prove transformative. Grinnell, Miller says, “took my head and opened it up.” 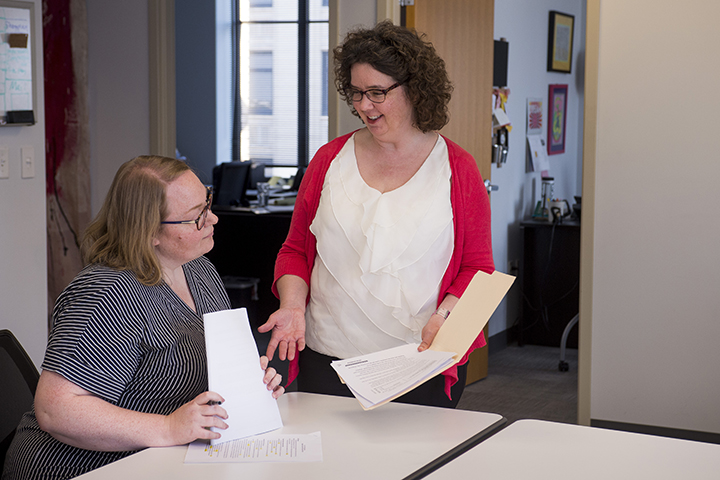 A crisis of conscience

When Miller was a first-year student, some of her Langan Hall floor mates invited her to volunteer with a group that helped out at a homeless shelter in Des Moines, Iowa, on weekends. It was unlike any experience she had had before. “It feels dumb to admit it, but I had not really had that face-to-face experience with people living in impoverished situations,” Miller says.

Then, in her third year, she studied abroad with Grinnell-in-London.

“That was my next crisis of conscience,” she says. Her first time in a big city, Miller saw things that shocked her. There were people sleeping on the streets and police hassling people who clearly didn’t speak English or understand what was happening. She recalls thinking, “Why are you hassling him? He’s trying to do the best he can!”

“I had kind of a meltdown,” she says. “I had met people at the homeless shelter in Des Moines, but they had a roof over their head and they had their own room. Wow. It sounds naïve, but I had no idea that was how the world worked.”

She talked to her Grinnell-in-London professor, the late Michael Cavanagh, trying to make sense of it all. After listening to her concerns, he suggested a career path she hadn’t considered: law school. She initially resisted. “I was a very shy person, and I couldn’t envision myself standing in court shouting ‘Objection!’”

Cavanagh insisted that she wouldn’t be happy unless she was actively making a difference. She relented. “I told myself I just wouldn’t be the courtroom type of lawyer.”

Going back to Nebraska

Miller has now been “the courtroom type of lawyer” for nearly 20 years. She started working part time at ACLU of Nebraska in 1999 and came on full time in 2001. Miller has long since overcome her shyness. “People were being mean to my clients! And I realized no matter how shy I’m feeling, I’ve gotta figure out how to yell at somebody.”

After Grinnell, Miller returned to her home state to attend law school at the University of Nebraska-Lincoln. She decided she should use her “gift of a good situation” to give back and right some of the ills in the world. “And then I thought, well, I should do that in Nebraska. Because we do suffer from brain drain, and somebody has to stay and fight. I guess I decided I would do that.”

Then, after a few years working at ACLU, Miller saw an appeal from Grinnell asking alumni if they would like to host student interns. “And I thought, ‘Uh, Cha! Yes, I would!’” Miller has been hosting a Grinnell intern each summer ever since.

Practical help and a fresh perspective

Miller had never thought to take on an intern until she saw the call for volunteers, but she now sees interns as an invaluable asset to her office. “Grinnell students pick things up so fast, and they really are quite independent, because that’s how the College is training them,” she says.

She also appreciates the more intangible benefits of mentoring Grinnell interns. Interns come back from court appalled at how the judge is treating people, or don’t understand why police seem to resist cultural sensitivity training. Seeing interns’ genuine reactions reminds Miller that certain things that seem commonplace to her aren’t so commonplace to those viewing them with fresh eyes.

“Having that fresh perspective keeps me in check so that I don’t allow injustices and inequities to seem like they’re just day-to-day business,” she says.

Her interns also help her keep tabs on what is happening back at Grinnell. While much has changed, she can always find common ground. “It is restorative and charming to remember there is life continuing on campus even though I’m not there anymore,” says Miller.

Every year, Miller takes projects that she knows will require hours of in-depth research and sets them aside specifically for her Grinnell interns. She also tries to give each intern at least a couple of options to ensure that they can work on something they’re passionate about and get the most out of the experience.

“It boggles my mind that there are internships that don’t fully embrace the opportunity that a talented, intelligent Grinnell student brings to the table,” says Miller. “I don’t need someone to go get me coffee — I can get my own coffee — but I do need help doing the substantive research that takes a lot of focus that I don’t have the time to do.”

This philosophy has served Miller — and her interns — well. Several bills have been introduced and passed into law in the Nebraska state legislature as a result of Grinnell intern reports.

Nathan Calvin ’18 is the latest intern whose research has made a lasting difference. During his 2017 summer internship at ACLU, Calvin wrote a report focusing on the high cost of calling home from jail, as well as privacy issues surrounding attorney-client phone calls. A law prohibiting “excessive commissions and bonus payments” and guaranteeing free calls between attorneys and their clients passed with bipartisan support in April.

Of working with Miller, Calvin says, “It’s really hard to imagine anyone taking their intern having a good experience more seriously. She’s not just a great boss, she’s a great mentor and friend.”

He credits the internship with solidifying his resolve to go to law school and helping him to understand the sort of work he wants to spend his life doing. He wrote about the experience in his law school applications and asked Miller for letters of recommendation. He has now been accepted at Stanford Law School, but will defer admission for a year to work on artificial intelligence ethics issues at Oxford University’s Governance of AI Institute.

Read more about internship opportunities at Is Grinnellink right for you?