A simple lunchtime conversation over a ham sandwich is one of the many reasons Luther and Jenny Erickson are beloved by numerous Grinnell College alumni.

“Every now and then, we would come across a student that needed a little bolstering or a pat on the back,” Jenny says. “Luther and I would invite the student to our nearby house to have a ham sandwich. Those situations really endeared us to students, and we enjoyed it. Years later, our doorbell would ring, and there would be those same students. That’s the gravy when you get older — seeing your students doing well.”

The Ericksons came to Grinnell in 1962 when Luther began teaching in the chemistry department; he served as a professor for 41 years, retiring in 2003. Jenny was director of the Forum for 20 years before retiring in 1997. Together they taught, encouraged, mentored, and supported thousands of students while also serving as pillars of the Grinnell community.

A group of more than 35 alumni have joined together to honor the Ericksons by making gifts and commitments to establish the Luther and Jenny Erickson Endowed Professorship of Chemistry. The professorship will play an important, strategic role in the academic life of Grinnell College, serving to both recruit and retain generations of future faculty members who embody the characteristics so well-known and generously shared by the Ericksons. 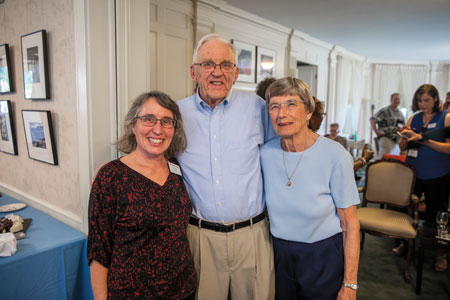 The initial professorship will be awarded to chemistry professor Leslie Lyons, whom the Ericksons have known for decades. In fact, the Ericksons and Lyons were next-door neighbors when both lived on College Park Road. Lyons and her husband Lee Sharpe, associate professor of chemistry, even share the same alma mater as the Ericksons — the University of Wisconsin–Madison.

Lyons will be formally installed as the Luther and Jenny Erickson Endowed Professor of Chemistry during a public ceremony in 2020.

Grinnell College trustee Edward Senn ’79 — who rang the Ericksons’ doorbell quite a few times — struck up a friendship when he worked for Jenny as a Forum desk attendant. He also had Luther as a professor. Senn sat with them at Herrick Chapel during the College’s last professorship installation. And it got him thinking.

“Luther and Jenny had a tremendous impact on generations of Grinnellians from the very beginning,” Senn says. “It hit me that naming a professorship would be a terrific way to honor them and help the College at the same time.”

Senn was not alone in that sentiment. While most professorships are set up by an individual donor or couple, Senn reached out to Kenneth ’65 and Mary Sue Wilson Coleman ’65 and Joe Oxman ’79 with a novel way of approaching the professorship — crowdsourcing. Oxman introduced the project to a broader audience of chemistry majors from the 1970s and 1980s.

“The chemistry professors there at the time — Luther, Gene Wubbels, and Roger Gurira — had an immense influence on many of us,” Oxman says. “The respect for them is still evident to this day, and there was enthusiasm about what this professorship could do for the chemistry department and student research. Luther and Jenny were inspirations to us. They were semi-parental for many.”

Mary Sue Coleman, president of the Association of American Colleges and Universities, was one of the countless students who benefited from advice and guidance of the Ericksons early in her career. She says it’s uplifting to know their legacy will carry on for future generations of Grinnellians through the professorship.

“So many people were positively touched by their lives,” she says.

As word spread about the professorship, Luther and Jenny’s phone and doorbell began to ring even more.

“Having this professorship in our names is an honor, and we do appreciate it,” Luther says. “It has put us in touch with more of our former students.”

“And it has put them back in touch with each other,” Jenny adds.