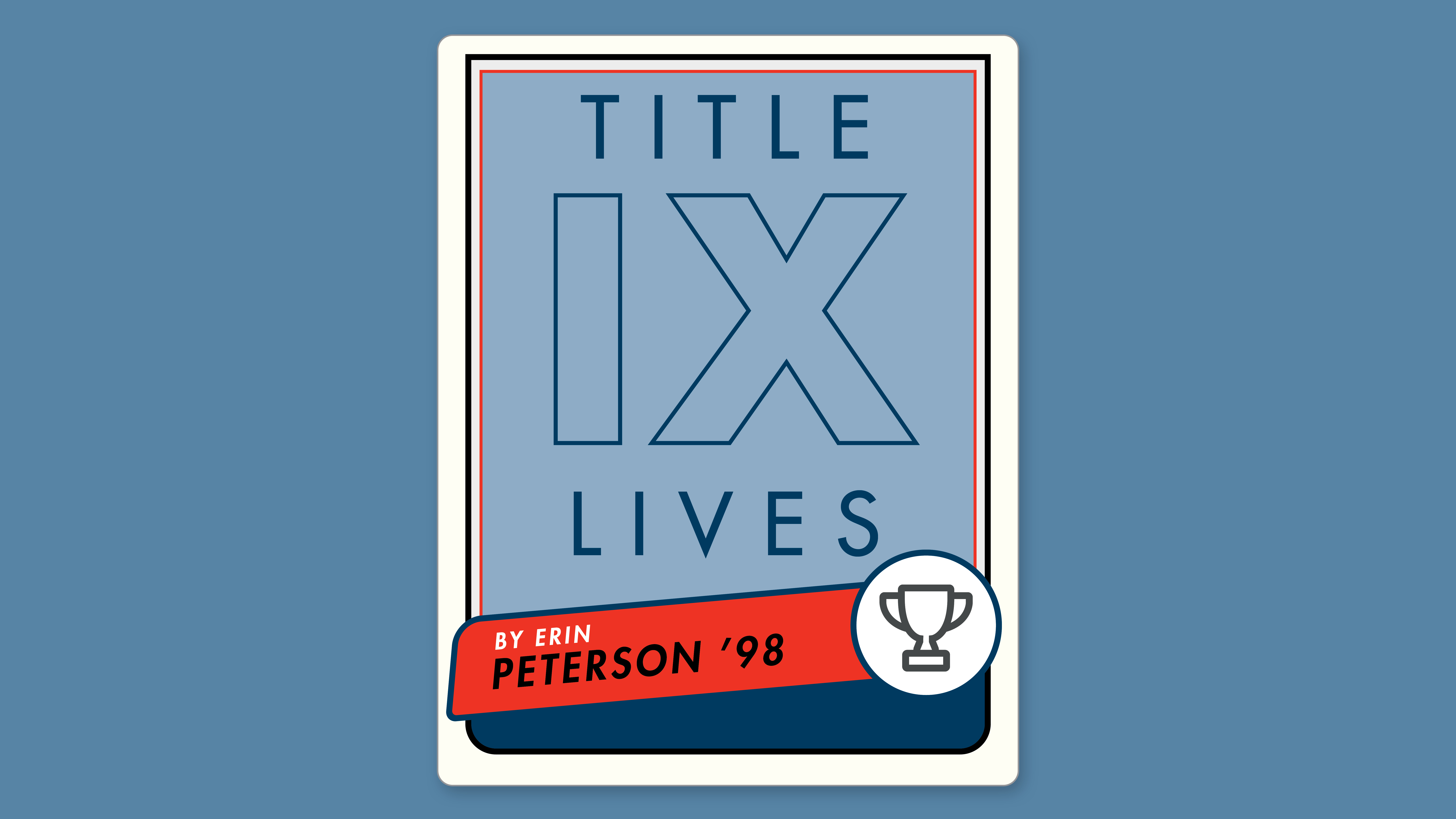 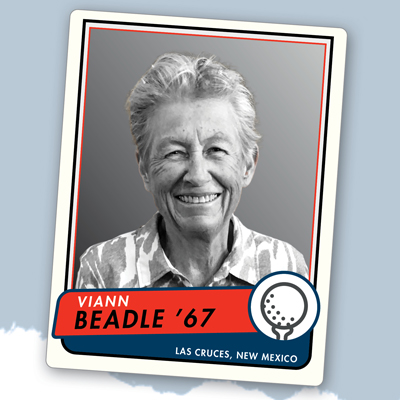 A standout golfer from an early age, ViAnn Beadle ’67 was winning tournaments by age 13. But when she entered Grinnell — nearly a decade before Title IX became law — she had few opportunities to make the most of her talents. She practiced — but did not compete — with the men’s golf team. (She nonetheless made enough of an impact to nab the center spot in the team photo.) “I played intramural basketball and volleyball, but we did not have coaches to teach us the game,” she recalls.

Beadle was a Grinnellian through and through, both during her student days and beyond: “I was an active political protester,” she says. “I got tear-gassed in Chicago and participated in national protests against the Vietnam War while I was in graduate school.”

In many ways, the progress since her student days has been stunning, and she is thrilled that today’s students can easily do what she once wished was available to her. “I am happy that women today can play golf competitively and participate in other sports representing Grinnell College,” she says. 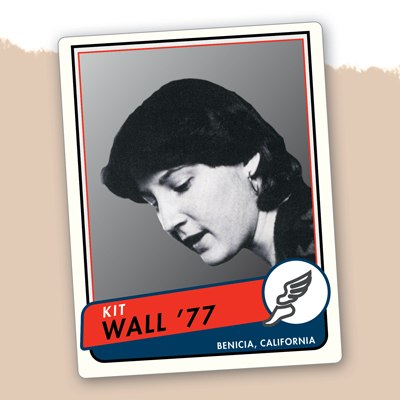 Kit Wall ’77 remembers that Title IX was “brand-spanking new” when she graduated from high school in 1973. When she arrived at Grinnell, she was determined to make the most of it. She lettered in tennis and admits that just being on the court was a thrill. “It was amazing that we could play,” she marvels.

She took plenty of coursework in the physical education department, including techniques of coaching as well as athletic management and training, where she was often the only woman in the room. John Pfitsch, a longtime coach and faculty member synonymous with Grinnell sports, noticed her interest and recruited her to run the College track and field meets.

When Pfitsch began looking for a head coach for the Title IX-mandated women’s cross country and track teams, he turned to Wall. Though she had never competed in either sport, Pfitsch knew she was trusted by students and well-schooled in the events. She became the inaugural head coach for both women’s teams.

Today, as owner of Kit Wall Productions, a public policy consultant and producer, Wall continues to lean on the skills she gained from her work in athletics. “I learned creative visualization, negotiation, how to manage people, and how to organize events,” she says. “These are skills I use every single day.” 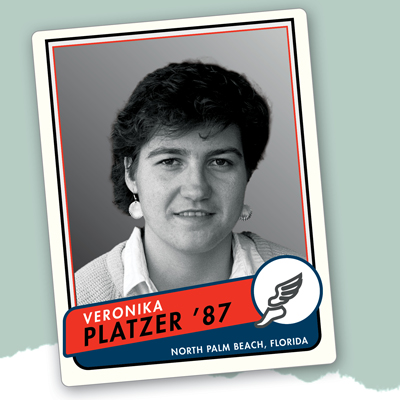 Veronika Platzer ’87 is the most decorated female athlete in Grinnell’s history — a three-time national champ in the discus and 10-time All- American. But when she went to her first NCAA national track and field meet, she had some surprising concerns. “They didn’t have a uniform for me,” she recalls. She settled for a shirt from the school bookstore.

Platzer rarely saw herself in the image of celebrated athletes at Grinnell; the trophy cases were filled with images of men. But to her, it was motivation. “I thought to myself, well, it’s got to start somewhere. My picture is going to be in there.”

Platzer, now an associate head coach for a club rowing team in North Palm Beach, Florida, still gets a thrill thinking about the Grinnellians who look at the trophy cases today and see women who inspire them to succeed. “They don’t just look at me, they look at a bunch of women. They can relate to them. They can say ‘her biceps look like mine,’” she says. “How freaking cool is that? It’s the best part of being successful.” 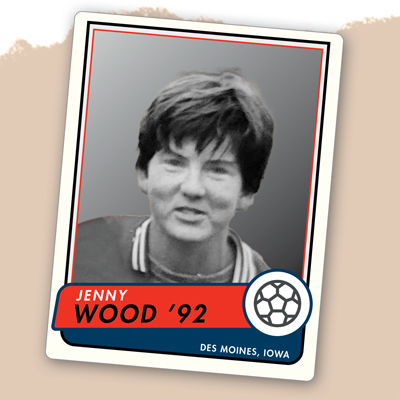 Born shortly before Title IX became law, Jenny Wood ’92 has lived through the full spectrum of changes in women’s athletics. As a young soccer player in leagues with no girls’ teams, she played on the same teams as the boys, where she competed just as well as her counterparts, often to the chagrin of the boys’ parents. It was just one of the myriad challenges of playing in poorly resourced leagues, which featured sloped fields. “Sometimes, we had to decide if we wanted to go uphill in the first half or the second half of the game,” she says wryly.

She brought her hard-won soccer skills to Grinnell, where she was a four-year MVP and the first Iowan to earn All-America recognition from the National Soccer Coaches Association of America. In 1998, she was named head men’s soccer coach at Grinnell, the first time a woman had served in the role.

Today, as chief operating officer of the Iowa Soccer Association, she continues to champion progress. “Women coaching boys’ and men’s teams and leading sports organizations must become normalized,” she says. “Boys and male coaching colleagues must have exposure to women in coaching and leadership positions, particularly in an all-male setting. Progress for women in sports won’t be made if women are excluded from coaching opportunities and leadership positions.” 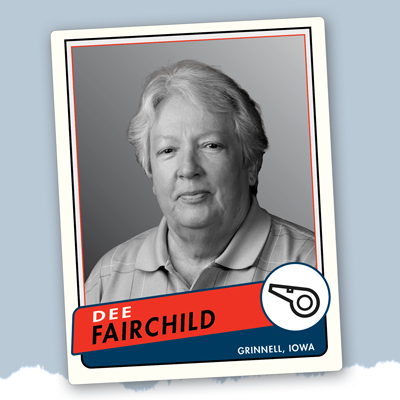 When Dee Fairchild landed Grinnell’s athletic director job in 1986, she was one of the first women in Iowa to lead both men’s and women’s athletic programs. But she was never content just to be among a pioneering cohort: she also aimed for impact.

During her two-decade tenure, an average of one-third of the student body participated in varsity athletics. She improved the indoor and outdoor facilities and hired many of the most beloved coaches at Grinnell. She also stayed true to the Title IX ethos: “I am proud that we added women’s soccer and women’s golf without thinking we had to drop a men’s sport, like many colleges did,” she says.

She retired in 2014, when in recognition of her career at the College, she became one of just a handful of non-alumni inductees into Grinnell’s Athletic Hall of Fame.

“I thought to myself, well, it’s got to start somewhere. My picture is going to be in there.” — Veronika Platzer ’87 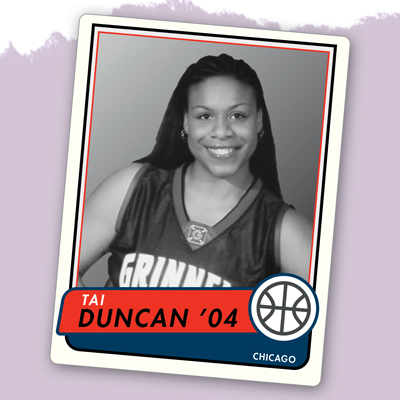 Grinnell Athletic Hall of Famer Tai Duncan ’04 racked up her share of accolades during her time at Grinnell, including All- Conference awards for both her academic and athletic performances.

Today, Duncan is vice president of community integration at Cresco Labs. As she looks back at the sports moments that mean the most to her, she is grateful for the memories of her playing days, full of friendships and life lessons, but also cherishes the 11 years she spent as a high school girls basketball coach. “Helping girls grow confidence in their bodies, find their voices, bounce back from injuries, support their teammates, and make their families proud by their sportsmanship — these are the things I loved about coaching and why it is one of the great loves of my life.” 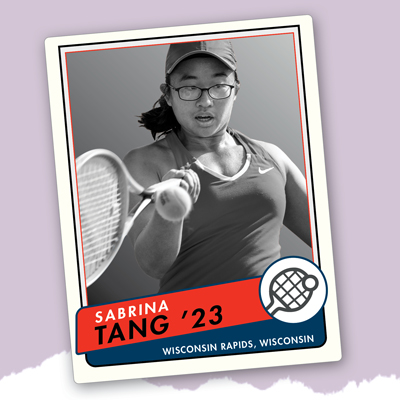 On the tennis court, Sabrina Tang ’23 has been nearly unstoppable. This past spring, Tang became the first Grinnellian to win an opening round singles match at the NCAA tournament. The senior is one of just two players in the team’s history to earn All-American honors.

Off the court, Tang’s accomplishments are just as impressive. Tang is a double major in biochemistry and French with a neuroscience concentration, has played in a violin chamber ensemble, and currently plans to go to medical school.

Perhaps more than many current athletes, Tang is also acutely aware of the evolving importance of Title IX. “As a nonbinary person, I am grateful that Title IX protects against discrimination based on sexual orientation and gender identity,” Tang says. “It is important that all students have access to an affirming environment to enjoy an extracurricular that can enrich their college experience.”

“Without Title IX, I wouldn’t have the same equal opportunities that I have today.” — Lauren Chen ’24 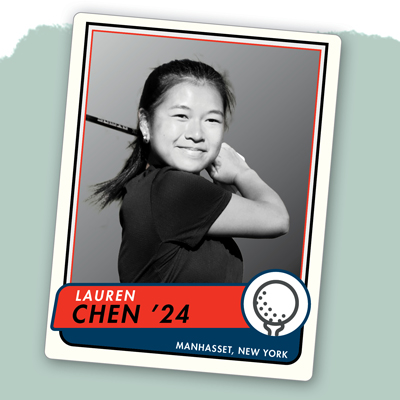 Lauren Chen ’24 had never heard of Grinnell College when she got an email out of the blue from David Arseneault, head women’s golf coach.

Today, her name is cemented in the school’s record books; her tallies have put her among the top handful of golfers in the program’s history. She’s competed at the NCAA championship and twice earned first-team All-Conference honors. Chen was named captain of the women’s golf team this year and is the Student Athlete Member (SAM) for the women’s golf team. The economics and history double major also serves as outreach coordinator of the Diversity and Inclusivity Club of Economics. When she graduates, she hopes to pursue a business career.

Chen says she’s grateful for what Title IX has made possible. “Without Title IX, I wouldn't have the same equal opportunities that I have today,” she says. 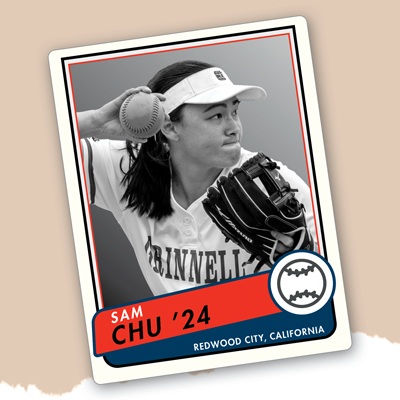 Third base player Sam
Chu ’24 was in the middle of a chemistry lab when a football player strode over and praised her dazzling performance at a recent home game he’d attended. She accepted the compliment and was reminded anew of the many reasons she loved competing and studying at Grinnell. The easy mingling and support among students performing at the highest levels in both athletics and academics felt inspiring and joyful.

Chu has been recognized numerous times for her performance on and off the field, including being named to the College Sports Information Directors of America Academic All-District Softball Team. She is a double major in chemistry and computer science.

For Chu, Title IX means she can pursue her goals without compromise. “Title IX means that I am protected in both the academic and athletic aspects of my life,” she says.

Fueling the Next Generation of Women’s Success in Athletics

For as much progress as women have made in athletics since the passage of Title IX, stark differences remain, says Jani Springer, assistant athletic director for diversity, equity, and inclusion.

Recent surveys, for example, suggest that just one-third of all head coaches are women. Despite progress for women in assistant coaching roles, they face challenges moving into the top spot. “Research suggests that people see assistant coaching as a ‘more caring’ role, and those roles get defaulted to women. Then, these coaches aren’t getting the skills they need to become head coaches, because they’re serving in such a different capacity,” says Springer.

With the help of a new Women’s Sports Foundation grant Springer landed, Grinnell will be able to support the growth of Kristland Damazo, assistant volleyball coach. Damazo will get a range of training opportunities to prepare her for a head coaching role in the future.

Springer says that the grant provides an opportunity that aligns both with the mission of Title IX and Grinnell. “At Grinnell, if you’ve got a goal, we want to support it,” she says. “We’ll give you the resources to be successful.”