It’s pitch-dark in Columbus, Ohio, when the alarm breaks the wintery stillness at 5 a.m. Instead of hitting “snooze” and burrowing further under the duvet, Sarah Burnell ’14 laces up her running shoes and heads outdoors.

It’s all “part of the allure” of training for the Boston Marathon, she says. But it’s also much more than that.

“This year my goal is to break 3 hours,” Burnell says. The former Grinnell track and cross country star felt she had trained to do just that in her first Boston Marathon last year but Patriots’ Day brought warmer-than-expected weather.

“It threw me off a bit and I ended up running a time (3:10:44) that was quite a bit slower than what I’d been training at,” Burnell says. Her time was still significantly faster than her previous best of 3 hours 24 minutes, which she’d run the previous fall at Rochester, Minn., and which served as her qualifying time for Boston.

“This year we’re going to try it again,” Burnell says.

Help from the ‘team’

Burnell is not using the rhetorical “we.” Tim Butterfield, former assistant director of admissions at Grinnell, is her running and training partner. Her coach and teammate from afar is Jennifer Latham, wife of Mike Latham, Grinnell’s vice president for academic affairs and dean of the College. Besides Burnell’s record-setting career as a student athlete, she is also a former Pioneer assistant track coach as well as a former staff member in admission and conference operations.

Burnell welcomes the training advice, since her specialties in college were indoor and outdoor middle distances (800 and 1,500 meters) and as a Pioneer harrier. She is second all-time in cross country program history.

“Jennifer has been helping me with last year’s and this year’s Boston Marathon training plan,” Burnell says. “She’s been really great because she’s run Boston a few times and qualified for the Olympic trials in the marathon, so she’s knowledgeable about long distance events.”

One change Burnell has made is to run shorter distances in the fall prior to Boston rather than a full marathon as she had done previously. “The issue with doing a marathon the season before is that it takes a full month until your legs are back,” she says, “whereas you can run a couple of half-marathons and still practice the pace with less recovery time required.”

Burnell says she checks in regularly with a chiropractor to keep her aligned and sees a physical therapist if an ailment pops up. One month before the race, she put in a 22-mile run — her longest of the training cycle. Incorporating cross-training days, bike work, and days off, she’s trying to avoid the little injuries that she says were “creeping up” at the end of training last year.

Growing to the challenge

Adding to the overall challenge is that Burnell started a new job in early February as assistant director of alumni relations at Otterbein University in Westerville, Ohio. Balancing a commute with running daily and lifting in the gym, it helps that her supervisor is a distance runner and swimmer who “totally gets marathons and endurance sports,” she says.

“It’s taking more thought now to coordinate everything, and it’s definitely pushed me to be more flexible and grow in ways that I thought I’d already grown,” says Burnell, who made the move from her native Grinnell to Columbus last November. I’m fortunate to have had some time between when I moved here and started working to have some adjustment time.”

Burnell points to her passion for running and solid coaching at Grinnell as key factors in her evolution as a distance runner. “It started off as a challenge, something new,” she says. “I’d never run a marathon distance before, or even a half-marathon, so I think it was just trying a new distance. From there it just kind of folded into enjoying the time outside, the long runs, and the feeling that you’ve accomplished something.

“Part of it is just having really good coaching,” Burnell says. “Will and Evelyn [Freeman] are fantastic coaches. One of the things that they teach, in addition to being a good runner for whatever distance you’re training for in the moment, is how to be a runner for life. It’s not easy in a post-collegiate running life to find 800s and the 1,500s, so while it was a big jump in terms of distances and types of training, the foundational things that they teach about being active for life have really shown through with my venturing off into marathons. 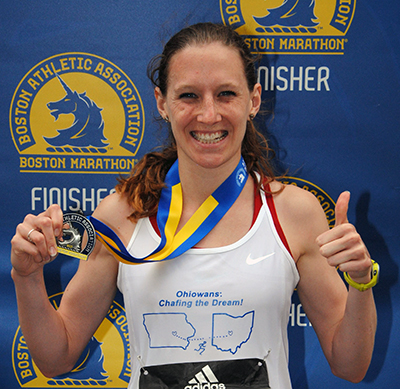 “I was aiming for an average of 6:50 per mile, which means I would have finished just under 3 hours, but with the heat I had to readjust my goals and I’m happy with 3:12:05,” Burnell says of her 7:20-per-mile pace. “I think that if the weather had been cooler, I could have run a pretty fast time. I felt like I was more in control of the race compared to my experience last year, and I didn’t feel as depleted post-race this time around. There will definitely be a few more Boston races in my future, but now I have my sights set on New York, Chicago, or one that’s been on my list for a while, Grandma’s Marathon in Duluth, Minn.”