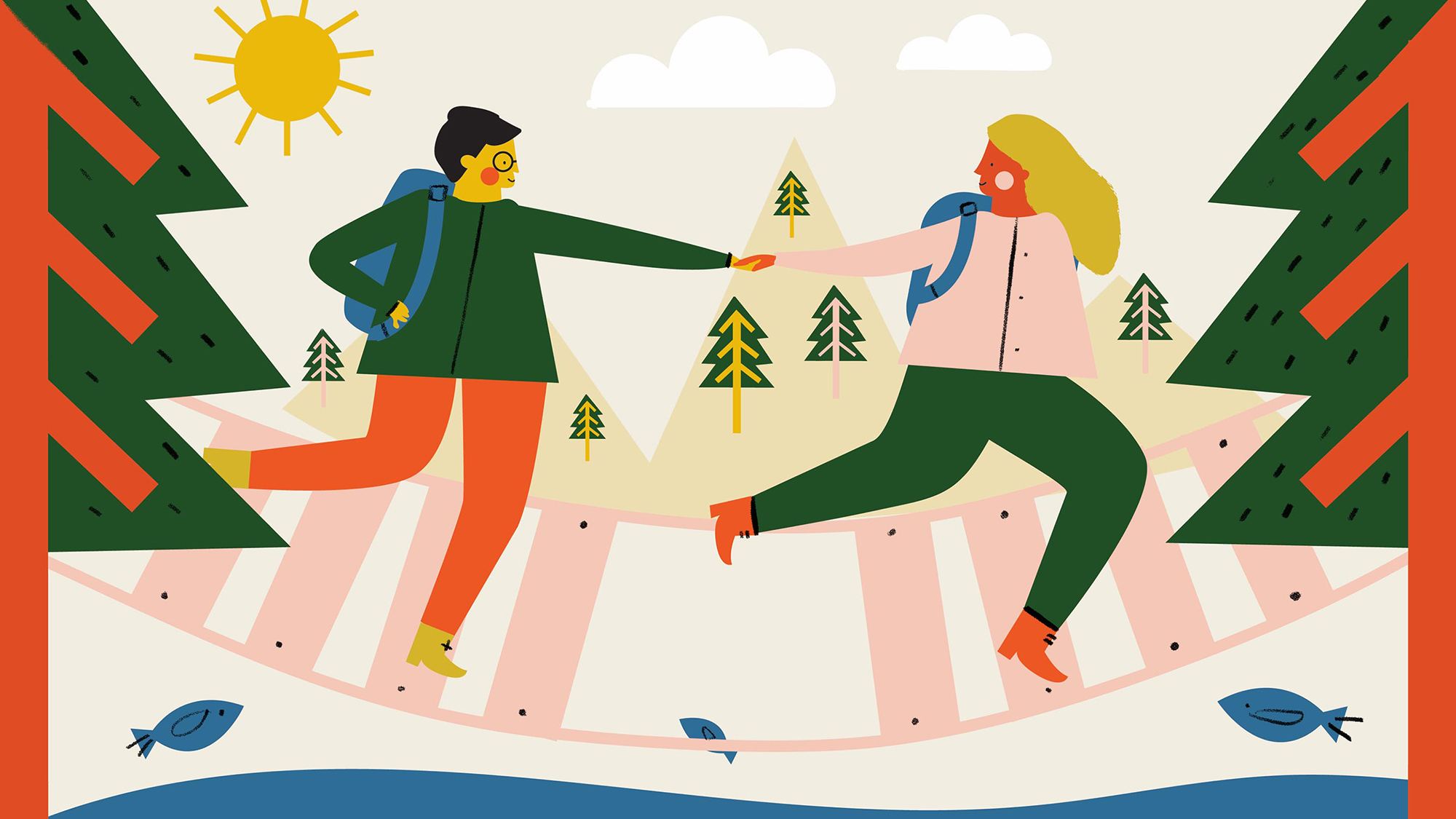 For students whose parents didn’t complete a four-year college degree, getting into Grinnell is just the first hurdle. Figuring out how to survive, much less thrive, is a whole series of hurdles. And it’s less a sprint over a brightly lit track than a marathon through a dark tunnel with blind curves, switchbacks, and alarming obstacles.

How do they navigate this tricky landscape alone, without a map? For those used to pulling themselves up by their own bootstraps, asking for help isn’t exactly second nature. They’re independent and self-reliant, and even if they wanted to ask for help, who would they ask and what would they say?

Anticipating those questions and those needs is something Grinnell is getting better at. As a first-generation college student himself, Mark Peltz, Daniel ’77 and Patricia Jipp ’80 Finkelman Dean of the Center for Careers, Life, and Service (CLS), understands the questions and the needs.

With Grinnell’s individually advised curriculum presenting much less structure than the traditional general education requirements at most colleges, he wonders, “Are we inherently making some assumptions about our students’ ability to navigate those sorts of less well-defined structures that are part of the student experience here?”

Being able to navigate the world of higher education effectively means understanding how it all works. Social capital theorists use the term habitus for that sort of understanding. “Habitus refers to the deeply ingrained knowledge, habits, and skills that we develop over our lifetimes. Some authors, like [Pierre] Bourdieu, have referred to habitus as understanding of the game,” Peltz says. “How processes work, how systems work, how higher education works is not inherently understood by all college students. How do you manage your time in an environment where there’s lots of free time? What are office hours? What are student groups? And who gets involved in those things? And why and how frequently? Oftentimes first-generation students may not have the habitus to make the most of college.”

Figuring out the rules of higher ed

Nomalanga Shields ’18 is a survivor. She was a low-income, first-generation student from Chicago, excited about attending Grinnell. Thinking about psychology and biology as possible majors, she attended the Grinnell Science Project pre-orientation for underrepresented students. During New Student Orientation, she recalls people saying, “Go to the Writing Lab, go to the Reading Lab, meet your professor in office hours.” The advice fell on deaf ears, Shields says. “I didn’t have to do that in high school because to go to Grinnell you have to do pretty well in high school, and you did it mostly by yourself.”

Her first semester, she took Russian, biology, and calculus in addition to her First-Year Tutorial. “I didn’t listen to anyone because I was thinking I can do this. I took hard classes in high school. I can do it now. But it was way too much to balance,” she says. The further into the semester she went, the worse she did, and the more alone and untethered she felt.

At home after that semester, she checked her grades on the College portal. Her GPA was below 2.0. She was put on academic probation. “I felt like such a failure,” Shields says. “I called my high school adviser because I didn’t have any good connections with professors or any staff at the time. I didn’t know who to go to for support or even to say how I was feeling.” She was worried she’d get kicked out of school. She wanted to quit or transfer, but her high school teachers urged her to tough it out.

At the beginning of her second semester, Shields was invited to join Partners in Education (PiE), a team of Grinnell faculty senior mentors, advising staff, and post-baccalaureate fellows as well as other struggling students. Mark Schneider, now professor emeritus of physics and then Shields’ academic adviser, was part of PiE. He and the others provided advice on homework and making a schedule. “He was someone to hold you accountable,” Shields says.

She had trouble making her own schedule. If she had three papers due, she didn’t know what to do. “I would sit down with Mark Schneider and he would be like, “You should go to the Writing Lab during this time, then check back in with me.” The process allowed her to start building better habits.

Shields also started developing a community with fellow students in PiE and relationships with professors. She went to their office hours and asked for help with papers. “By doing that, then my papers started getting better,” Shields says. Early in her work with Patrick Inglis, associate professor of sociology, he thought she was a C-minus paper writer. “I was so upset,” she says. “I was like an A-plus paper writer in high school. Now he jokes, ‘You’re an A-minus paper writer. You’ve grown so much.’

“Second semester got a lot better because I felt like I had a team behind me at that point. You can’t really do everything by yourself,” Shields says. “In higher education it’s just not in the classroom where you’re learning, but also what you do you do after hours. Who are you meeting, what study groups are you a part of, how are you spending your time, if you’re going to sleep at a right time. Every hour after classes matters, and that’s something that I didn’t understand during my first year. I didn’t realize higher education really was like the whole 24 hours, how you plan that out. It really matters.”

Preparing for careers that matter 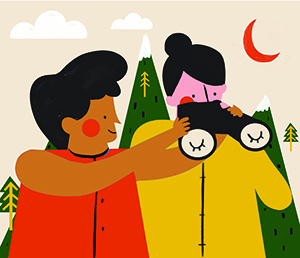 Figuring out the academic side of college is a huge relief, but there’s still figuring out what to do for a career. Peltz says, “We shouldn’t assume that students know how to navigate this process. Some students might have a very clear and well-defined idea of what they want to do and the pathway to get to that particular outcome. Other students may not necessarily have any sense of what that future goal could look like, should look like, and how to navigate that pathway. I think that the work that we do in the CLS helps coach and mentor students in navigating some of those worlds.”

Tim Burnette ’19, a low-income, first-generation student from Virginia who self-identifies with the pronouns they/their, knew since high school that they wanted to earn either a Ph.D. or an M.D. For half days during high school, Burnette attended a magnet school that emphasized science and prepared them well academically for Grinnell. They figured out early on how to navigate College and get what they needed by speaking up and asking for it. But, Burnette says, “I had no idea how to do outside of Grinnell, real-life stuff. Laundry and daily things, got it. But getting a job, getting a competitive fellowship, going to grad school? I had no idea how to do any of it.”

Peltz says, “In the context of our work in the CLS, I think about it helping students to develop both the personal insights about themselves, you know, ‘Who am I, what do I care deeply about, why?’ But then it’s also then mapping some of those personal observations onto what other opportunities are available and understanding what those options and pathways might look like and how to navigate those. And some of that comes through direct experience of various kinds.” An externship, for example.

Burnette did an externship their first year with Lynn Westley ’80, assistant professor of biology at Lake Forest College. Burnette got to see what the life of a professor is like, and since they had been trying to decide between being a professor and pre-med, the experience made a big difference. “That convinced me this is what I want to do,” Burnette says.

During their second year, Burnette was invited to a “potato lunch extravaganza” put on by the CLS for second-year students with excellent grades to talk to them about highly competitive scholarships and fellowships. Burnette says with a grin, “I liked the idea of a baked potato lunch. It just sounds fancy, so I went. That put fellowships on my radar, because I didn’t know what they were. I ended up getting an honorable mention for the Goldwater Scholarship, which is a big national science award. I would never have applied if [the CLS] wouldn’t have had the baked potato luncheon, because I wouldn’t have known to.”

Burnette credits Ann Landstrom, assistant dean and director of global fellowships and awards at the CLS, with helping them figure out what fellowships and other opportunities to apply for and how to prepare application materials so they were as compelling as possible. “She was able to turn every con, or what you would think as a con, into a pro. It was incredible, yeah. I won’t say she’s a magic worker but she’s a magic worker,” Burnette says. They’re waiting to hear about a possible Fulbright grant, which they’d use to study with a professor in the Arctic Circle and defer graduate study for a year.

Burnette plans to pursue a doctorate in botany and has already been accepted by the University of Kansas. “Vince [Eckhart, professor of biology] not only convinced me that was an option but was the person that helped me figure out how to do a lot of that. He provided a lot of guidance about who I should talk to, who’s the better school, what school has the best reputation, who he knows.”

People like Eckhart, Landstrom, and Ashley Millet, manager of the campus greenhouse where Burnette has worked all four years, form a sort of personal network for Burnette to bounce ideas off of, learn how things work, and forge further connections. 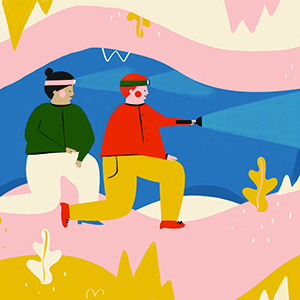 It’s exactly the kind of networking Peltz wants all students to experience. “The other big piece with social capital is,” Peltz says, “in addition to increased self-awareness and a better understanding of how particular industries behave, or how decisions get made, or things like that, there’s also this sort of network effect that is oftentimes missing from particular groups of students. Meaning who they know, who is able to help them even further, may be initially pretty limited.

“So through experience, through these connections, and through developing one’s personal advisory board, students are leveraging the knowledge, skills, and connections — the social capital, of sorts — of others to develop their own. And that’s one of the benefits of coming to a small-knit community, because it’s through those relationships and experiences that those gaps tend to get filled.”

And Shields, who had such a rough first year? Well, she’s over halfway through her Thomas J. Watson Fellowship, studying housing displacement and social inclusion strategies in Hungary, India, and South Africa.