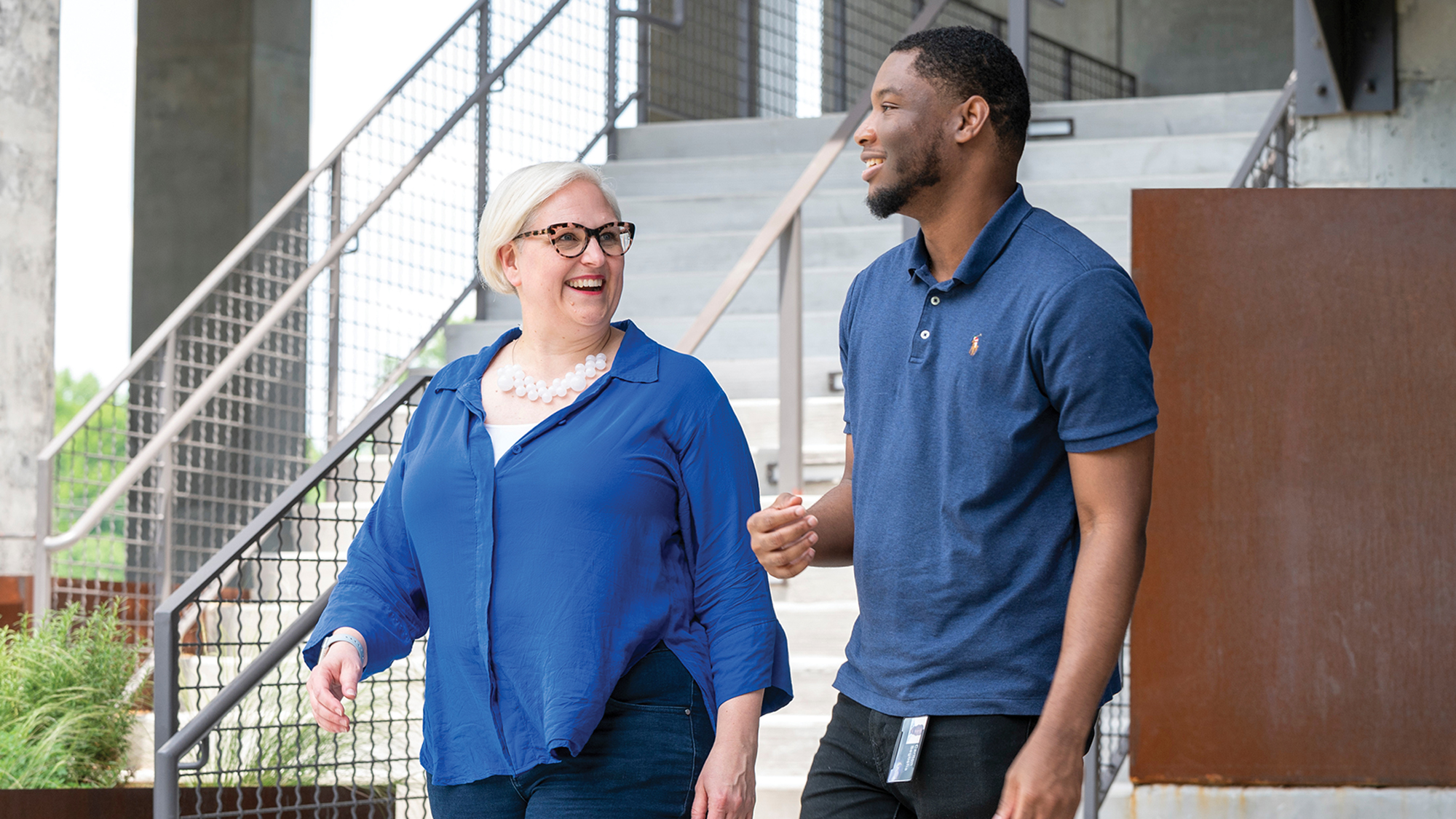 A Wide-Open World of Opportunity

The Wilson Center for Innovation and Leadership
Jacqueline Hartling Stolze

When Kathy Clemons-Beasley ’95 was considering her options as a prospective first-generation college student, there was a lot she didn’t know.

For instance, how do you choose a college? Her father had refused to pay for her education unless she attended a state university near her home, but her heart was set on Grinnell. Was it better to accept her father’s offer or commit to her dream school? She opted for the latter.

“Going to Grinnell was an act of defiance — I wasn’t going to let my father tell me what to do,” she laughs.

Clemons-Beasley says she’s still happy she made her own decision to choose Grinnell for her French and women’s studies majors. “I do feel proud that I took that jump. I didn’t let that fear get in the way of me doing something I wanted to do.”

Today, she is a senior leader at BlackRock, a global financial services firm. She’s also a member of the Leadership Council for Grinnell’s Donald ’25 and Winifred ’27 Wilson Center for Innovation and Leadership, where she serves as a mentor for current students and an adviser for the center’s annual hackathon, known as HackGC. Clemons-Beasley has been a frequent speaker at the center’s Diverse Paths of Leadership and Innovation Speaker Series. Through her work with the Wilson Center, she’s helping current Grinnell students reimagine their futures and “take the jump.”

The Wilson Center for Innovation and Leadership 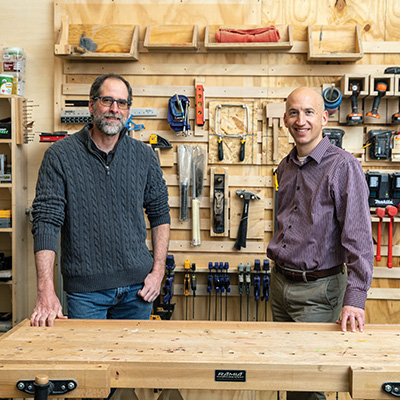 Monty Roper (left) and Jeffrey Blanchard in the Stew Makerspace, a collaboration with the Grinnell Arts Council that provides space, tools, and guidance for students and community members.

The Wilson Center is Grinnell’s hub for initiatives designed to develop students’ leadership skills and support them in finding meaningful futures. Wilson Center programs help students strengthen key skills at the intersection of leadership and innovation, such as a willingness to experiment, courage in the face of potential failure, and the ability to deal with ambiguity. The center offers courses in entrepreneurship, leadership strategies, innovation, and pitch competitions; leadership workshops; programs that connect students with alumni mentors, such as Clemons-Beasley; and the popular Creative Careers: Learning from Alumni.

Helping Grinnellians imagine a career they hadn’t previously considered gives Clemons-Beasley immense satisfaction. “I love it,” she says. “I feel really lucky to be able to help people think differently about what they might focus on.”

For instance, she says, Grinnellians searching for a social justice-oriented career might look at BlackRock and think, “Oh, investments — bad.” She encourages students to think of industries like financial services in a different way. For instance, by working at BlackRock, a Grinnell graduate could support corporate diversity efforts. Clemons-Beasley herself is involved in racial equity work to improve the experience of underrepresented professionals at BlackRock.

“What we do matters, and if we can make change, then the change will go elsewhere,” Clemons-Beasley says. She’s thrilled to help students explore new, often unexpected ways to make a difference in the world and to promote the common good.

Opening students’ eyes to possibilities — that could be the elevator pitch for the Wilson Center.

Created in the 1980s with a gift from life trustee Donald Wilson 1925 and Winifred Read Wilson 1927, the program originally brought speakers to campus from business and industry. The Wilsons wanted to stimulate “the intellectual life of both the campus and the town of Grinnell” and to connect students with alumni and other people in the world outside academia. The center has continued to grow into a vital part of life at Grinnell by sponsoring innovative curricular and cocurricular programming.

About 20 years ago, when Doug Caulkins, professor of anthropology, took over the Wilson program, he envisioned expanded programming better attuned to today’s students. He wanted more students seeking to create social change to look beyond the nonprofit world when they thought about careers and to understand that there are lots of ways to make a difference.

Caulkins proposed engaging alumni as living examples of the world of opportunity waiting for students post-Grinnell. He launched the perennially popular course Creative Careers: Learning from Alumni, in which Grinnell graduates describe their career paths and lessons learned along the way. By sharing their stories, alumni could demonstrate that an innovative and socially responsible career can exist anywhere.

“Students tend to trust alumni since they all share a common culture,” Caulkins says. His big ideas have helped inspire the leaders of the Wilson Center today.

Jeffrey Blanchard, associate professor of mathematics and statistics, has served as Wilson Center director since July 2021.

He took over a program that had expanded and evolved under Monty Roper, associate professor of anthropology, who led the center for six years. “Monty Roper had a clear vision, which he developed to create this outstanding program on innovation,” Blanchard says.

Students don’t need to know exactly where they’re headed after college — it’s OK to meander from one opportunity to another. In fact, Roper says, there’s a name for that: “the Grinnell drift.”

After graduation, Grinnellians often spend a few years trying out different careers. This doesn’t reflect a lack of focus or ambition — it’s a continuation of Grinnell experimentation. The drift can be part of a journey that leads to a career that’s really engaging.

Blanchard is enthusiastic about carrying the center’s work forward. “It’s a place where I thought I could serve the College well,” he says. As a former U.S. Army officer, Blanchard is particularly interested in leadership. He hopes to further bolster the leadership development programming at the Wilson Center.

As a child, Ghana native Carlton Segbefia ’21 dreamed of starting his own small business. He still harbors that dream, although he hasn’t decided what type of business to launch. For now, though, the computer science and sociology double major is happy in his position as an analyst and software engineer at BlackRock.

Segbefia is living his own version of the Grinnell drift. He hasn’t given up on the idea of owning his own business. “I’ll just work toward making sure that whenever I figure something out, I can do it,” he explains.

At Grinnell, Segbefia participated in many Wilson Center programs: HackGC, Pioneer Weekend, and more. He met Clemons-Beasley through her work as a hackathon adviser. Segbefia also worked for the center and helped develop and run the Stew Makerspace.

Later, when Segbefia interviewed at BlackRock, he turned to Clemons-Beasley for guidance. She was able to advise him about the company culture, information that can be difficult to find as a job seeker.

“What she told me ended up being exactly what I needed to hear,” Segbefia says. He accepted the job — and loves it.

They both work in the company’s Atlanta office, and Segbefia says it was great to know there was a friendly face at his new workplace. “The first time we met in the office, she gave me such a huge hug. It was so welcoming,” he says.

What motivates alumni to get involved with students through the Wilson Center? Part of it is the joy they derive from being helpful, says Robert Gehorsam ’76, an adviser to startups. He is also a consultant working with mission-driven organizations seeking to align their vision with actionable strategies and operational plans and the Grinnell Alumni Council president. He is a frequent speaker with the Wilson Center’s Learning from Alumni series and mentors students one on one. Gehorsam remembers when a student asked him, rather sheepishly, for an introduction that might help her land an internship.

Gehorsam could tell the student was uncomfortable asking for help. He offered a different view. “Let me explain — do you have any idea of how deeply gratifying it is for alumni to be asked to help? It’s not transactional. It’s like this great dopamine hit.”

He also offers a bit of perspective to students (and their parents) who may worry that a liberal arts degree might not lead to a rewarding career. A Grinnell education is invaluable in the world of work, far beyond any particular major or concentration, he explains. The value is in how students learn to communicate, collaborate, and just be curious. 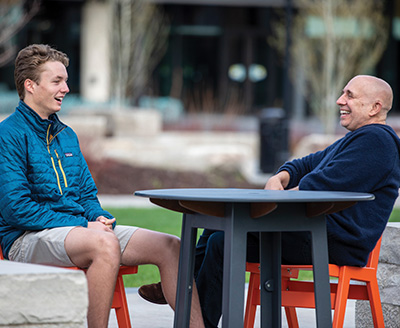 ‘You Could Have Paid Me Zero’

However, Gehorsam says he also benefits from working with students through the Wilson Center. Putting together presentations for students offers an opportunity to think about his own career, he says, and the long, strange trip it’s been.

As a new graduate, he started out in the book publishing world of New York City, where he earned the princely sum of $9,000 a year — barely enough to get by, even in the late ’70s. But the perks were great: free movie screenings, lunches with famous authors, and more. “You could have paid me zero,” Gehorsam laughs.

He moved on to diverse fields such as computer games and digital media; he now advises a range of startups in artificial intelligence, education, games, music, and virtual reality. It’s been an amazing journey. “How does that happen? Is it just random?” he asks. Talking to students about his path is a way of making meaning out of his own life story.

Gehorsam also hopes his story gives students confidence that they, too, will find their way to a meaningful career. It’s reassuring, says Lukas Roscoe ’23, one of the students who has connected with Gehorsam. “Robert’s awesome,” Roscoe says. “He’s done so many different things throughout his career. He just had a ton of good advice.”

Gehorsam was able to help Roscoe line up an internship while he was studying abroad at the Stockholm School of Economics in Sweden in fall 2021. The third-year economics major says it was his best semester yet. Roscoe reached out to Gehorsam while he was abroad. “Robert was able to connect me with a technology accelerator [in Stockholm], where I ended up interning for a few months.” Roscoe says.

Their relationship is ongoing. “I see him as someone that I can reach out to for advice — he’s always been there for me,” Roscoe adds.

These close relationships between students and alumni are emblematic of the work of the Wilson Center, which offers alumni the opportunity to repay the kindnesses they received for the benefit of the students of today, “paying it forward” for the good of future generations of Grinnellians and the greater good of society and the world. 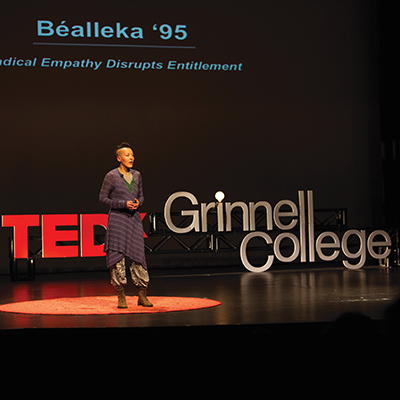 The Wilson Center sponsors dozens of activities, programs, and spaces. Between 20 and 25% of students participate in at least one Wilson program every academic year; in 2020–21, more than 130 alumni volunteered, either in person or virtually. Here’s a sample of what’s going on: