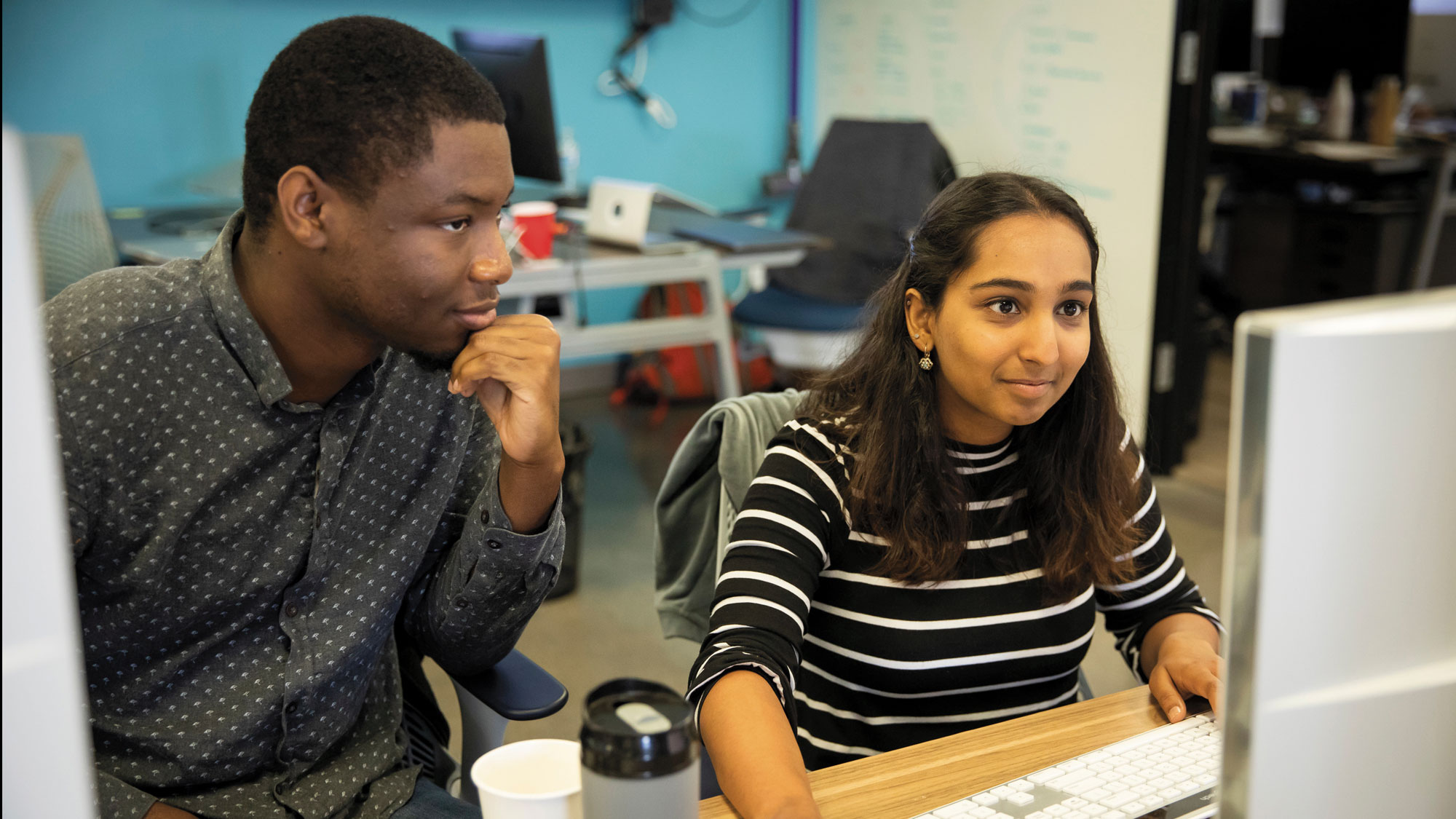 What Grinnell Interns Brought to a Tech Company

In April 2019, as Grinnell students scrambled to track down summer internships, a mobile health startup in Los Angeles offered the motherlode to four lucky Grinnellians — paid internships plus help with housing. At mPulse Mobile, Rena Brar Prayaga, director of behavioral data science, and Ram Prayaga, chief technology officer, wanted interns from Grinnell, but not because their sons Gyan Prayaga ’21 and Jeev Prayaga ’22 attend the school. “One of the reasons is the social justice mission focus that we’ve seen when we’ve visited and talked to students,” Rena says. “That was important because we are a mobile health startup where much of what we do is focused on trying to help to improve outcomes for underserved populations and hard-to-reach populations.”

Those populations include people on Medicaid and Medicare, who are often lower income, older, more vulnerable, and more isolated. Uncovering the needs and barriers related to health behavior and communications for these populations was crucial. “We wanted students who’d be willing to engage in that kind of thinking and be committed to that approach, which requires a lot more effort,” Rena says.

The ability to take risks when you don’t know exactly what the outcome will be, Ram says, was also something they were looking for in interns. It was a quality they’d spotted among Grinnell students. “The willingness to put yourself out there, to put your ego on the line, that’s not something that you find very often,” Ram says.

Rena and Ram, who have hired interns before, decided to try something new for summer 2019 by creating a cohort of four interns. Carlton Segbefia ’21, Ridhika Agrawal ’20, Ben Nguyen ’19, and Aditi Munshi ’19 joined mPulse Mobile’s behavioral data science team. “We brought them in to do some high-value innovation projects,” Rena says. “These were projects that the CEO was watching and waiting for.” Segbefia, a computer science and sociology double major from Ghana, built a dashboard that shows daily metrics — what’s working and what’s not — that’s displayed on a large TV screen at the company’s office. “We were very impressed with his ability to think through the problem,” Ram says. “He wasn’t too nervous about taking on something outside his comfort zone.” 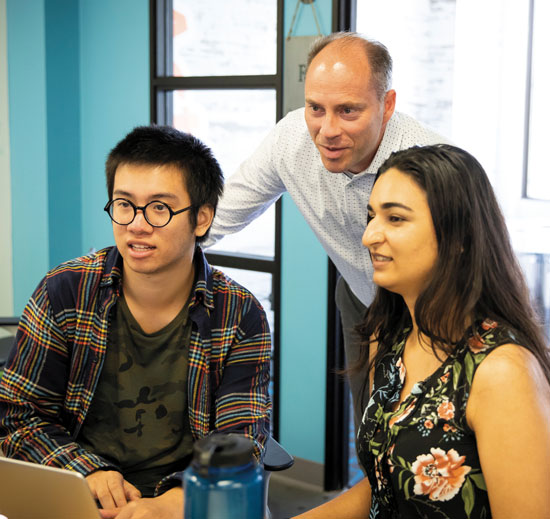 Agrawal, an economics and math double major from India, and Nguyen, a psychology major from Michigan, worked together on a study about patients refilling their prescriptions. The work included cleaning and preparing data, data analysis and modeling, literature reviews, and writing. Their contributions earned them co-author status on a paper accepted by the Journal of Medical Internet Research.

Munshi, a computer science major from California who is completing her second year in a 3-2 electrical engineering program at Columbia University, helped build application software, specifically an “activation score.” The score helps describe how likely a patient is to engage in healthy behaviors, Rena explains. “We gave her some guidelines and she wrote the rules.” Ram worked with Munshi on the project. “There’s a lot of data,” he says. “If you don’t do it in an efficient manner, then it takes too long. We definitely had challenges along the way. I thought, she’s not going to be up for it, she’s going to be frustrated, but she just plowed through it and kept going. That was cool. We were really proud of her and what she was able to accomplish.”

Ram and Rena were also impressed with the students’ level of maturity. “They brought a high level of integrity to their work,” Rena says. “Even little things.” Like work hours. “They would be here on the dot. They didn’t take long lunch breaks. They worked usually a little beyond what they were supposed to.” “We had to shoo them out,” Ram says. “They were constantly asking for more,” Rena adds. “We weren’t used to that.” Ram jokes, “It was kind of annoying for us, actually.”

Figuring out short-term housing, especially in high price locations like Los Angeles, can make internships, even paid ones, expensive learning experiences. For a while, the four interns had plans to share an Airbnb. “We knew they’d need a place to stay,” Rena says. She and Ram proposed to their CEO that the company rent an apartment that could be used by the interns during the summer. At other times, the company’s own remote workers could stay there when they’re in town. “We wanted [the students] to feel safe,” Rena says, “and not spend an hour commuting.” The apartment was about a 10-minute walk away. The CEO and CFO donated furniture and dishes to help make it comfortable.

With their own place to retreat to, it would have been easy for the interns to hole up by themselves, but they embraced the mPulse community. “They were outgoing,” Ram says. “They didn’t keep to themselves. Whatever social events the company was holding, they participated.” Their contributions, both professional and social, made an impact.

“It was a big loss when they left,” Rena says. The company is thinking about replicating the cohort model next summer.

Meanwhile, the company offered ongoing internships to Segbefia and Agrawal, who worked remotely from Grinnell during the fall. “That was fantastic for us,” Rena says, “because they have the domain knowledge.”

And fantastic for the students.